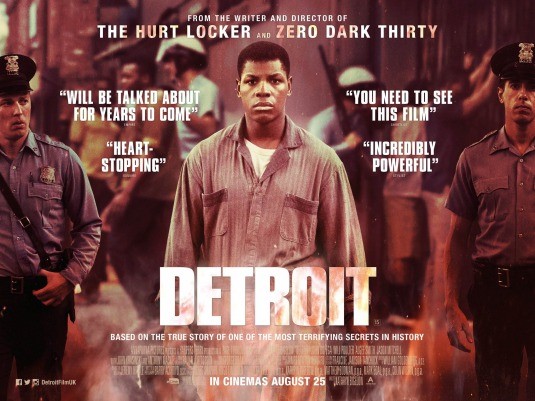 The first female to win an Oscar for best director with The Hurt Locker (2010), Kathryn Bigelow, has made a powerful mark on the moviemaking map. Tense, heroic tones underpinned that six-Oscar-winning thriller about American IED (improvised explosive device) detection crews working in Afghanistan. She then directed Zero Dark Thirty (2012), a fictional drama about the killing of Osama Bin Laden, with deeply contentious themes of ‘legitimised’ government interrogation techniques.

A bold filmmaker whose themes and sub-texts parallel stories which arise from extreme political and cultural circumstances, with Detroit (2017) Bigelow again takes her audience on a deep dive into an experience which is menacing and explosive. Framed by a sense of claustrophobic intensity within a community seething with violent conflict, with characteristic fly-on-the-wall and in-the-moment style, this film leaves little or no room for ambiguity. Responsibly telling the story about talented black men who were murdered by police in Detroit in 1967, it honestly reflects events which represent, to its director, ‘a real American tragedy’.

Bigelow’s consistent collaborator is screenwriter, Mark Boal, who she credits with passion for detail. Boal wrote about his approach to the screenplay for Detroit: ‘The foundation of the story … was provided by an ample historical record, documents, police files, and a research team I commissioned, led by veteran investigative journalist David Zeman … The summer of 1967 witnessed two of the worst civil disturbances in American history … [where the] more widely remembered (and celebrated) spectacle of rebellion from that same moment in time is of the summer of love … by now … diffused into little more than an advertising trope, but the events in Detroit are hard evidence of a cultural crisis that remains unresolved, of two Americas that still don’t know quite how to deal with each other’.

As the film opens, paintings by artist, Jacob Lawrence, in particular from his collection, The Migration Series, are captioned to briefly project a past timeline of black migration. These artistic impressions pre-narrate where we are at this point in America’s history of racial conflict. We then move quickly into the harrowing realism of a combustive powder-keg of riots within Detroit’s oppressed and restless communities, as their black political leader, Democratic Congressman, John James Conyers (Laz Alonso) calls for peaceful demonstration. With that, the film immediately exudes the feeling of being there.

Implicit in Detroit is the representation of a white supremacist argument which endorses the use of violence, oppression and disenfranchisement to carelessly and abusively label black Americans as ‘criminals’. Less implicit is the credence which was afforded to violent racist police and blatant disregard of judicial equality (through advancements in legal civil rights). Identical themes are being brought to light by other exceptional filmmakers such as the British director of 12 Years a Slave (2013) Steve McQueen, whose recent collection of Small Axe films screened on British television.

Verisimilitude and close paralleling with factualism are particular trademarks of Bigelow-Boal collaborations. Their decision to create a film which leaves little or no room for ambiguity about versions of truth in their latest collaboration was purely intentional. Outstanding performances are given by British actors, Will Poulter and John Boyega, who continue to gain huge admiration from audiences and critics both in the UK and across the pond. They lead a strong cast. Despite the excellence of these performances, some reviewers levelled criticisms of role stereotyping and simplification against the actors playing police officers. Rather, the character of police officer, Philip Krauss, brilliantly played by Poulter, is conveyed with aplomb as a force for evil, rather than law and order as reasonable people see it. Interviewed about his role whilst these criticisms raged amongst some, Poulter made his feeling of responsibility in playing the character of Krauss clear: ‘… to expose a racist individual in the context of a film that has so much potential for impacting social change and the fact that the film makes such a relevant comment about society’. The point about such racists is that their vile conduct defines stereotype and vice-versa.

Detroit as a ‘racial horror-crime’ film turns out to have been strangely predictive of the broiling tensions which resurfaced and brought amplified anger, racism and division to bear across the planet in 2020. Whilst we witness such disturbing phenomena through fresh eyes and broadcasting technologies, we come to reason that this excellent film is as much about the long-term impacts which racist violence makes upon its victims as it is about conveying the truth of the events which happened to inspire it.