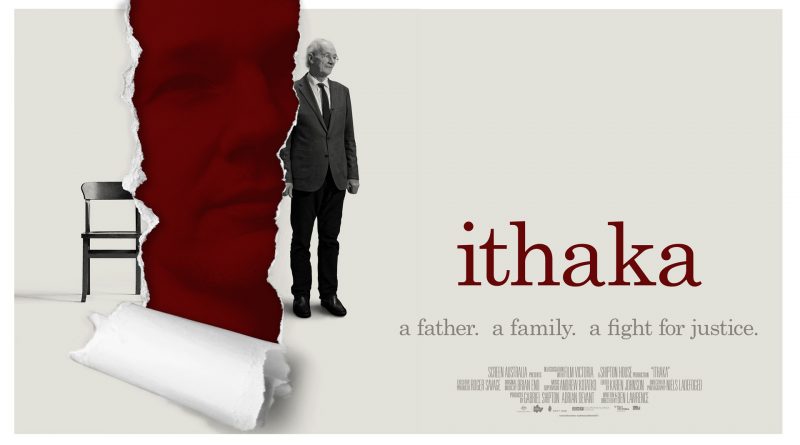 At its simplest, Ithaka tells the story of a father, John Shipton, who travelled halfway around the world to fight for his son, Julian Assange’s freedom. The documentary opens with footage of the inciting event which triggered his journey. This was the moment on 11 April 2019, when the radical publisher, journalist, political activist and founder of WikiLeaks was forcibly removed from his place of refuge, within the Ecuadorian Embassy in London. Charged with 17 counts of espionage, in connection with the Chelsea Manning case, Assange was consequently incarcerated within high security Belmarsh prison.

Ithaka conveys relevant political landmarks to its story: in 2003, Assange led the largest public protest in human history called ‘No war in Iraq’; in 2006, he launched WikiLeaks; and in 2010, WikiLeaks published millions of classified documents and images which exposed war crimes by the American government. In 2011, Swedish prosecutors sought to extradite Assange in connection with rape charges, which were officially dropped in May 2017. Granted diplomatic asylum by the Ecuadorian government in August 2012, he was arrested seven years later. On 10 December 2021, High Court judges ruled that he could be extradited to America, in prospect of serving a prison term of 175 years.

The galvanising voice and presence in this moving documentary is John Shipton. An Australian house-builder in his seventies, who detests all forms of PR. but despite which, he has selflessly campaigned in rallying significant support for the necessarily public fight to free his son and give voice to his predicament; in his own words, to get him ‘… out of the shit’.

Sharing responsibility as Assange’s spokesperson at key events, mother of their two young children, Stella Morris remains part of his legal support team. In November 2021, Club Suisse de la Presse in Geneva hosted a public event where she spoke with deep emotion about the meaning of a specially commissioned statue of Julian ‘in 3D’. We learn that this press association event relates to a point in time which signified two years of his enforced solitary confinement.

John and Stella consistently communicate a specific legal argument, where a win for Julian would represent a win for journalism. Their point, therefore, moves the specific, 2011 needle: ‘When we understand that wars come about as a result of lies, peddled to the British public and the American public and public all over Europe and other countries, then who are the war criminals? It is not just leaders, it is not just soldiers, it is journalists, journalists are war criminals,’ said Assange (Daily Outlook Afghanistan, 2011).

In one brief public speech which features in Ithaka, Stella clarifies that ‘[Julian is] the world’s most famous political prisoner… [an] emblem of an international arm wrestle over freedom of journalism, government corruption and unpunished war crimes’. She moreover asserts: ‘No European publisher has ever been charged with espionage’. Similarly, speaking from the heart during a post-screening Q&A in Glasgow in 2022, John described his imprisoned son as ‘A bringer of fire to the people’ while expressing his fear that, despite their genetic stamina, ‘… things cannot get better for Julian’.

Writer and human rights activist, Craig Murray, introduced Ithaka as a documentary about ‘… political extradition as a concept’. He has also written ‘… the film … is not a dissection of the legal issues, nor an in-depth recounting of the Assange case. It … focuses on the devastating effect of his cruel imprisonment on his family, both his wife and children, and on his father’.

Nevertheless, whilst the film delivers a touching, insider view of the family’s lives, it also weighs in on the democratic anti-war narrative which may hold significant potential in relation to the current war between Russia and Ukraine, and which also reflects upon and speaks to America’s invasion of Afghanistan in 2003. To echo the politically focused perspective of the film: at its most complex, it tells the story of a time when layers of political rhetoric could be peeled back, to reveal the machinations of war and to throw light on the impacts.

Audiences are free to judge father and son as heroes or as anti-heroes; to empathise, sympathise or reject their arguments. Producer Gabriel Shipton’s decision to tune us into his father’s sonorous voice, unflagging loyalty and Australian directness awakens us to their plight to support a meaningful legacy for Assange and his work; to counteract dehumanising stories about the WikiLeaks founder, and to set the record straight. As the groundswell of support grows, there can be no denying the voracity of their poignant truths.