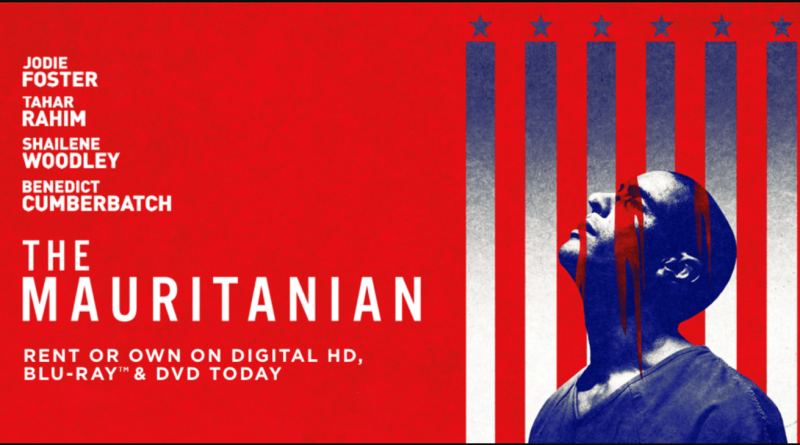 The Mauritanian is based upon the testimonies of Mohamedou Ould Slahi, who, suspected of terrorism, was arrested by Mauritanian police in November 2001. Consequently, he was questioned by the FBI, then imprisoned in solitary confinement in Amman, before being transported via Afghanistan to Guantánamo Detention Centre – GITMO – on the island of Cuba where he was detained without charge for 14 years and two months.

Whilst in captivity, accused of recruiting terrorists on behalf of Al Qaeda, specifically the hijackers of both airplanes which were crashed into the twin towers, he wrote a daily diary. His memoirs, ‘Guantánamo Diary’ were consequently published in 2015. According to Wikipedia: ‘[That] edition was heavily redacted by US intelligence officials. In 2017 a ‘restored edition’ was published with redactions removed’.

Kevin Macdonald’s film focuses on key aspects of the relationship which Ould Slahi (Tahar Rahim) built with clemency lawyer, Nancy Hollander (Jodie Foster), whose pro bono fight for his freedom led to his eventual release from prison in October 2016.

In an early scene, Hollander meets the Albuquerque District Attorney in February 2005, to discuss taking the Ould Slahi case, under habeas corpus. Soon after she agrees to represent the accused, we are made acutely aware of how high the protocol stakes are, when she reaches the point of holding a first meeting with her client at Guantánamo. A formidable, winning force, she works through the operational system knowing exactly what she is doing. Foster brilliantly portrays this quality with faultless sure-footedness.

The film tracks Hollander’s pursuit of an initially unsuccessful Freedom of Information (FOI) request. Key scenes, thus, highlight the public and government obstacles which she and her assistant, Teri Duncan (Shailene Woodley), are up against. Following their tracks through a hostile crowd of protestors at the Court for the District of Columbia, we learn that the court judge orders the United States government to file unredacted papers to it at the GITMO Privilege Centre within nine days.

Hollander has spoken about her involvement in the screenplay: ‘I provided the filmmakers with the transcripts of hearings, I explained the law to them and the case, and I said that ‘I know you can’t include everything, but I want you to know what really happened and then you can decide how you’re going to put this into a movie … I can’t watch the torture scenes … I love watching the film [but] …The rape scenes are awful. There’s a hallucination scene where he sees his mother. I can’t watch that’. (Albuquerque Journal, September 2022)

Intense visceral impact comes through in the film from the point when Hollander issues an impassioned ultimatum to Ould Slahi, to ensure that nothing holds back her fight for justice. Although he struggles deeply in complying with her demands, but through ultimate trust he forces himself to write details of his most traumatic experiences in captivity. Harrowing scenes reflect his psychological trauma during flashbacks, while he commits to writing about his torture by US interrogators, who practiced ‘enhanced interrogation techniques’ to obtain information from him.

Also framed within flashbacks, his young, free life in apparently idyllic home circumstances in Mauritania tell of happier times during the 1980s and 1990s. Opposing Ould Slahi’s release, military prosecutor, Stuart Couch (Benedict Cumberbatch), meanwhile vows to achieve the death penalty for personal and professional reasons. Originally a force for political motives which are aimed at ensuring this outcome, his position changes, as it becomes clear that legal justice is on shaky ground within the case.

The Mauritanian is almost the reverse of Kathryn Bigelow’s Zero Dark Thirty, which took an intense perspective on the calculated, successful hunting down and killing of Osama Bin Laden. Whereas Bigelow and her screenwriter, Mark Boal, placed a fictional character, Maya (Jessica Chastain) at the centre of events which led to his assassination by the American military, Macdonald’s film tracks its real characters’ emotional rollercoaster rides through focusing upon the integrity of relationships between lawyer and accused; to a degree also between Ould Slahi and a heard-not-seen fellow-detainee.

Foster stunningly conveys Hollander’s natural authority and emotional intelligence. She also pulls out all the stops in portraying the raw emotion which we believe Hollander must have experienced while building trust and respect with Ould Slahi. Rahim conveys both vulnerable and strong aspects of Ould Slahi’s character, with utter conviction and dignity. Strongly recommended viewing.