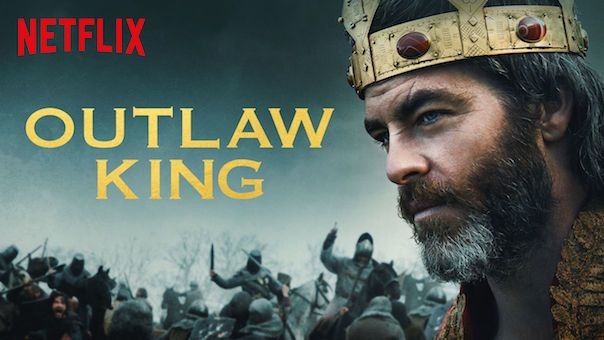 Hailing from Scotland, David Mackenzie contextualises his film about Robert the Bruce’s rise to becoming the chief successful figure in Scotland’s fiercest battles for independence with backdrops of medieval turmoil and political savagery. Outlaw King – possibly unavoidably comparable with multiple award-winning Braveheart (1995) – certainly draws unequivocal reminders to William Wallace’s spirit and influence, as well as his execution and beheading by the English. Mackenzie and Scottish producer, Gillian Berrie, strive to portray Robert the Bruce through diverging from heroic martyr Wallace’s story: post-screening, her comment that she ‘would like Scotland to be brave and take things forward out of this [mess] that Theresa May has landed us with’ conveys political ideals which are internal and external to their film.

In the opening scene of Outlaw King, a Shakespearian abbreviation of historical events symbolises political manoeuvres amongst opposing forces of power, together with propositions to rejoice the upcoming marriage of God-daughter to King Edward I, Elizabeth de Burgh (Florence Pugh) and Robert the Bruce (Chris Pine). The taking of Stirling Castle by King Edward I (Stephen Dillane) is forebodingly represented by one vast, destructive slingshot. Clearly not intended to provide a simple history lesson, Outlaw King delivers much more, abridging time arcs between 1304, when John III Comyn (Callan Mulvey), contender for the Scottish crown, submitted power to King Edward I and 1314, when the Battle of Bannockburn was won by the Scots.

Blood-free, with excessive mud underfoot, the opening tableau ascertains young Edward, Prince of Wales (Billy Howle) and young Robert as obvious rivals, creating a brooding atmosphere of kinship, rivalry, betrayal, love and revenge yet to play out. It also establishes King Edward as a man who is unable to inspire trust in his assumed lieges.

Outlaw King magnetises our emotional investment around the players closest and most loyal to Robert the Bruce. Cast with a fabulous blend of actors, including Pine, James Cosmo (Robert the Bruce senior), Tony Curran (Lord of Islay) and Aaron Taylor Johnson (Lord of Douglas), the storyline weaves a profound tapestry of solidarity. Feisty, sensual and intelligent as Robert the Bruce’s lover and then wife, Elizabeth, Pugh also turns in a notable performance, ultimately dicing against the English King under his brutal command, steadfast in her true loyalty to her husband.

Rendering similar characteristics of ruthless, taciturn resolve and judicious charisma borne through his former work with Mackenzie in Hell or High Water (2016) and with an authentic-sounding Scots accent to boot, Pine radiates masculine integrity. Nonetheless, outstanding performance plaudits in Outlaw King could easily be handed to Johnson. The actor cuts a luminous swathe of fierce intention and crazed revenge across the screen like barely contained wildfire, somehow also imbuing the character of Black Douglas with enthralling charm.

‘The actors just went for it’ says Mackenzie, responding to the post-screening question of how he managed to get such a performance from Johnson, humbly belying his own extraordinary ability in directing talented performers – Jack O’Connell in award-winning film Starred Up (2013) representing just one other case in point. Outlaw King sees Mackenzie, whose talent in bringing stellar performances to the silver screen is consistently lauded by film reviewers, working to brilliant effect again with Chris Pine. The total chemistry of acting talent is tremendous.

Ferocious, bloody battle scenes culminate in the Scots seizing back Kildrummy Castle and, ultimately, winning victory at Loudon; there is no question that Robert the Bruce’s precedent murder of disloyal challenger, Comyn, resounds with sagacious reason; when Edward II is finally forced by Robert the Bruce to surrender and retreat, we applaud both the inimitable quality of the Scots warrior’s considered victory and the dishonourable humiliation of Edward II in defeat. Such is the potent authority of acting and storytelling in this film. Flashes of gutsy, true-to-life humour add a bit extra. Accompanying spectacular music score (composed by Scottish company, Grey Dogs) contributes a uniting effect to both magnificent panoramic and microcosmic features, through a hybrid of modern and traditional soundscapes.

Not quite perfect as a sum of all its parts, the momentum of Outlaw King briefly drops during scenes where Clan MacDougall forces Robert the Bruce into hiding. Evidently edited for commercial deadlines, this action piece falls short of the rest of the film’s powerfully driven war-craft stratagem and its muscular plot. However, two hours and seventeen minutes of watching time seems much shorter thanks to the unreservedly engrossing and beguiling thrust and milieu of this highly recommendable, excellent film.