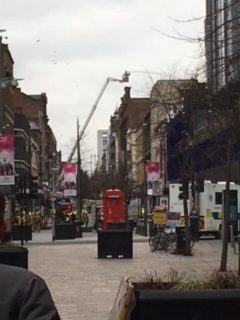 From Dundee to Nablus, Jim Malone shows what solidarity, not sympathy, looks like.

In 1982, at the TUC Congress, Ken Cameron, FBU General Secretary and a member of the Trade Union Friends of Palestine, tabled an emergency motion which condemned Israel’s brutal invasion of its neighbour Lebanon and recognised ‘the national rights of the Palestinian people to self- determination within an independent sovereign state’.

Ken’s advocacy in supporting Palestinians and the Palestinian cause remained within him until his passing in 2016. Those of us in the FBU who shared his commitment have taken forward an honourable legacy. Since 2009 when Ken Ross, then FBU Scottish Secretary, brought eight firefighters to Britain from Dundee’s twin city of Nablus, the Scottish FBU have led on various projects aimed at supporting Palestinian firefighters through training initiatives and the delivery to Palestine consignments of firefighting kit and equipment.

In 2010, Tayside FBU sent donations of firefighting kit to Gaza from Dundee. In 2011 at FBU Annual Conference delegates donated funds to allow the purchase of two fire appliances by the Scottish FBU. The union engaged with the Scottish Parliamentary Cross Party Group to assist in the logistics, contacts in the Histadrut and PGFTU also offered help, Dundee TUC saw the convoy off and these appliances were driven 2,500 miles from Dundee by FBU officials. One eventually, packed with firefighting Personal Protective Equipment (PPE), compressed air breathing apparatus (CABA), helmets, fire boots and RTC cutting equipment was, after being impounded by the Israeli authorities, delivered to the Nablus Municipality in December of that year. This appliance still serves the people of Nablus emblazoned with the FBU Dundee to Nablus logo.

The years 2012 to 2013 saw a partnership between the Scottish Fire & Rescue Service the (SFRS) and the Palestinian Civil Defence (PCD), and courses facilitated by the FBU which saw all PCD senior officers receive modern management training in Dundee and Glasgow. In 2014, at the request of the PCD and after several civilian fatalities, two courses were delivered on Swift Water Rescue, with firefighters attending these courses at the National Training Centre at Cambuslang with practical sessions on the River Clyde and Loch Lomond. In 2015, I returned to Palestine to assess the current support requirements for the Municipalities of Nablus, Ramallah, Hebron and the PCD, I was accompanied on this visit by FBU documentary filmmaker, Ciaran Gibbons. We met friends, old and new, visiting firefighter comrades throughout Palestine and also at two Israeli stations in West Jerusalem. The visit to the occupied old town of Hebron (Al Khalil) was particularly harrowing. The FBU pledged full support to the Municipality by promising to assist in training and the delivery of equipment. Ciaran’s FBU sponsored award winning documentary, Firefighters under Occupation, has been seen throughout the world. In 2016 it premiered in Dundee, was shown in Palestine on a return visit, and Ken Loach gave the film warm praise at a showing in Brighton , saying ‘the film gives a firefighter’s view on delivering humanitarian public services under military occupation, it captures brilliantly the humanity at the heart of the role of a firefighter’.

As promised, the FBU worked hard in sourcing more PPE and firefighting equipment, so that a shipping container packed with kit left Dundee for Palestine on 3 January 2017. After the FBU donation was once again held up by the Israeli authorities, it reached Palestine so that hundreds of fire kits, helmets, boots, much needed medical kit and Breathing Apparatus were donated. The FBU had witnessed the shocking situation in Hebron where firefighters had no PPE, no fire kit, no boots, no helmets and no CABA sets, when they received the FBU donation it afforded them excellent protection but the Al Khalil comrades still required training in the use of the donated kit. Our comrades in the PCD with excellent kit, equipment and management training still had to travel abroad to receive training due to the lack of qualified trainers in Palestine.

Then the Scottish FBU embarked on its most challenging support programme, again in partnership with the SF&RS, Scottish Government, PCD, the Municipality of Hebron, the Scottish Cross Party Palestinian Group. With these bodies, the union facilitated the first ever CABA course for Hebron firefighters and the first ever Training Instructors course for PCD firefighters. So, in January and February this year these ground breaking initiatives were delivered at the National Training Centre, comrades attended the Holyrood and Westminster Parliaments and two excellent receptions at the STUC during their training programme. The FBU has now facilitated the training of over 100 Palestinian firefighters since 2009, and we have delivered hundreds of sets of CABA, fire kit, hose, branches, cutting equipment, search and rescue equipment, medical kit and a fire appliance.

Our Palestinian comrades have achieved so much but require so much more in order to do more. The FBU has led the way in the union movement in our solidarity work with Palestinian firefighters – in doing so, we have shown solidarity to the occupied people of Palestine. In 2014, when Ken and Nuala Cameron came to meet our Palestinian comrades at their hotel in Glasgow, the young Palestinian firefighters response to Ken’s visit was one of quiet deference. Like all young people they were on their mobile phones telling their friends and family that they had just met ‘Mr Ken‘ in Scotland! Ken’s legacy will, we are assured, live on.

Jim Malone has been the FBU Palestinian Support Coordinator since the union’s Scottish Region ‘Dundee to Nablus’ project started in 2011. Prior to this, he served for 30 years as an operational firefighter in Dundee and was an FBU branch, brigade and regional official. He was elected Scottish Regional Organiser, serving between 2009 and 2013 when he retired. He is a member of the executive of Dundee Trades Union Council.

• More about the film can be found at https://www.fbu.org.uk/blog/firefighters-under-occupation-0

Educating for the struggles ahead