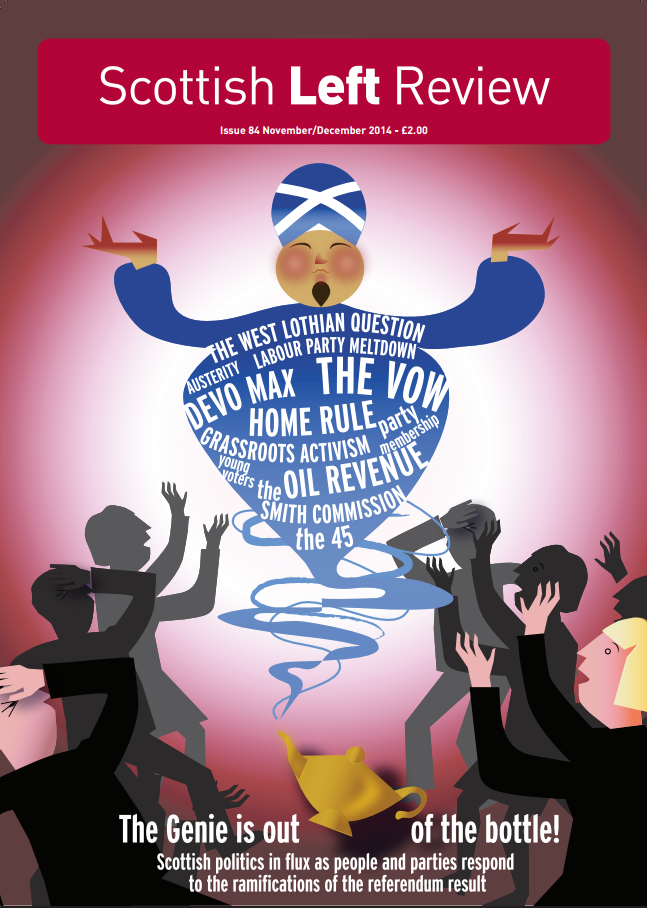 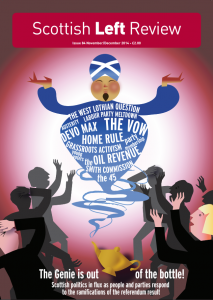 The title on the front cover of Scottish Left Review number 84 summed up the debate on Scotland’s constitutional future: the genie is out of the bottle. The Scotland Bill proposals will see more powers and responsibilities coming to the Scottish Parliament but irrespective of how these new powers will be practiced, the debate about the scope of power and control will rage on. What is clear, however, is that the labour movement in Scotland must get on the front foot of the devolution debate rather than reacting to the eventual lie of the land.

That’s why Unite made it clear in our contributions to the Smith Commission that we wanted the devolution of the necessary powers to improve justice in the workplace. That’s also why we called the exclusion of these provisions from the Commission’s recommendations a ‘missed opportunity’.
While the spotlight shone brightly on the economic and social debate on issues like income tax and welfare and important as they are, there was a distinct lack of debate over employment rights from anywhere other than the ranks of the unions.

Now, following on from the Conservative’s election victory, that ‘missed opportunity’ looks more like a glaring omission because the future prospects for UK employment rights are so grim. No sooner had the feet of new Business Secretary, Sajid Javid, crossed the door at the Department for Business, Innovation & Skills (BIS), he announced that a Trade Union Bill would be brought forward in the first 100 days of the new government – new proposals to ‘modernise’ union ballots and restrict the right to strike. The increase of ballot turnout thresholds is an attack on democracy, further exacerbating legislation concerning union freedoms that were already among the most regressive in Europe.

The mainstream rationale is that this will curb industrial action and union ‘militancy’ to protect the fragile economic recovery, but that in itself is a false flag to hide the bigger picture. The Trade Union Bill is not just about undermining workplace democracy: it’s also a tool for economic control and the continued imposition of the austerity agenda.

It’s a fact that the hallmarks of the more prosperous and egalitarian economies include free unions with high levels of collective agreements and bargaining rights covering its workers. It is also fact that the assault on union and collective rights during the 1980s and early 1990s proved a significant driver in the increase of UK income inequality over the last thirty years. There is a direct correlation between union decline and the rising gap between the rich and the poor and with it the ability to address this inequality.

This is precisely why we have been arguing for the devolution of employment law to Scotland. We need an opportunity to demonstrate that the left can achieve something better than a programme of resistance while trying to fight the decline of employment incomes, standards and rights – which austerity will only exacerbate – with both hands tied behind our backs.

The current debate on further devolution presents us with that opportunity. We are told that we have a social democratic, left-of-centre consensus in Scotland. Well, if that is the case, let’s put it to the test because we don’t half have our challenges to seek: the real value of full-time wages fell by £1,900 over the last five years; 250,000 people are classed as working poor; 100,000 people are employed on zero hour contracts; and 1 in 5 children live in households blighted by poverty.

Yes, these conditions are reflected across the rest of the UK but let’s be clear, the incumbent UK government is not going to bend or bow to proposals from the left of centre to remedy these inequalities – and we cannot wait for five years on a UK Labour Party to get its act together either.

So on the question of devolution, instead of debating ‘what if’ our attitude should be ‘why not’?

• Why wouldn’t we want the powers to raise the minimum wage in Scotland, setting a target date for the convergence of the minimum wage and living wage rate to be implemented across our private and public sectors?

• Why wouldn’t we want the powers to create a new culture of employment relations in Scotland, where we could enshrine union freedoms in law and promote new approaches to collective agreements and bargaining as a driver for growth and prosperity?

• Why wouldn’t we want the powers to create a Scottish modern apprenticeship centre of excellence, with a compulsory target percentage of school leavers being recruited from the most deprived economic areas, to support and sustain the jobs and skills needed for our growth economic sectors?

Irrespective of whether you voted ‘yes’ or ‘no’ in last year’s independence referendum or whatever your ambitions for the constitutional future, we have to be more ambitious and bold about how we can maximise the opportunities that further devolution and constitutional change will bring.

Now, the devolution of employment law may not be forthcoming in the Scotland Bill but that doesn’t mean we shouldn’t be making the case for its future devolution. Indeed, far from it. The labour movement has spent far too long being overly- cautious and conservative in our ambitions for devolution and the future of Scotland and as a consequence, more people in Scotland are finding their activism and engagement in other circles.

We have to get on the front foot of the debate because that’s where the vast majority of the country is already at. So this is most certainly not about abandoning workers across the rest of the UK and neither is it about kowtowing to the SNP in absence of a Labour government or a robust Labour opposition. This is about our relevance, our place and our role in the future of our country.

We can either get on the bus and make a compelling, modern and democratic socialist offering to tackle the gross inequalities in Scotland today – acting as a beacon for the left across the rest of the UK – or we can sit on our hands in protest while the opportunity passes us by. The genie is indeed out of the bottle and it’s time for the labour movement to be brave, bold and lead by example from Scotland.

Pat Rafferty is the Secretary of Unite Scotland