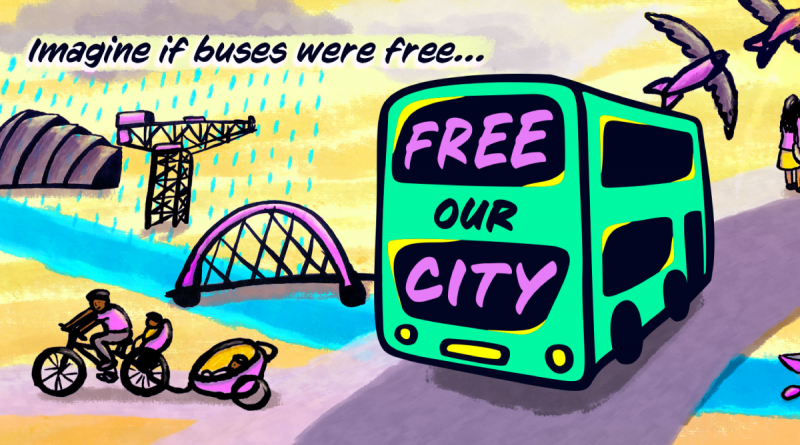 September 2020 sees Get Glasgow Moving joining forces with unions, climate movement and community campaigns to launch the ‘Free Our City’ coalition in Glasgow. Inspired by hundreds of forward-thinking cities across the world – from Kansas to Calais – we’re demanding that our politicians deliver a world-class, fully-integrated and accessible public transport network that’s free at the point of use. This radical policy is now urgent and necessary to ensure our city makes a just and green recovery from the pandemic – a recovery which addresses the climate emergency and tackles gross inequalities in our society.

Free public transport benefits everyone, but especially those living on low incomes, young people, women and black and ethnic minorities – who all rely on public transport more. In Glasgow, with such low car-ownership (49% of households), free public transport would reduce social isolation and lift people out of poverty. Last year, Glasgow City Council declared a ‘climate emergency’ and agreed the target of reducing the city’s emissions to net-zero by 2030. One of their Climate Emergency Working Group’s Recommendations was to undertake a ‘formal assessment of the potential for making the transition to a public transport system that is free to use’.

The Free Our City coalition has been founded to ensure this ‘assessment’ becomes action to make this policy a reality sooner rather than later. Reliance on private cars is the main cause of carbon emissions and toxic air pollution in our city. In order to meet the 2030 target, car mileage will have to be cut by as much as 60% over a decade. We need to provide universal and comprehensive public transport so that everyone can fully-participate in the social and economic life of our city without need or aspiration to own a car.

Free public transport also has economic benefits far outweighing the cost of running it – returning £1.70 to the economy for every £1 spent, and it can pay for itself in increased tax receipts. But it is only practical and cost-effective to deliver with full public control of the whole public transport network – trains, Subway and buses. Glasgow’s Subway is currently the only part publicly-owned and controlled (by SPT), which is why fares are so much cheaper than the buses. But the tide is turning. Transport Secretary, Michael Matheson, announced in December 2019 that he would end Abellio’s contract to run ScotRail three years early, in 2022, and we’re campaigning for a public sector operator to take over trains. And we now have new powers available in the Transport (Scotland) Act 2019 to re-regulate our bus network (under ‘franchising’) and set up a publicly-owned bus company for Greater Glasgow to take over routes and reconnect the communities left stranded as a result of cuts by private bus companies.

The coronavirus crisis has proved public transport is an essential public service to get key-workers to their jobs. It has also laid bare the absurdities of running our public transport on a for-profit basis. The need to maximise profits from fares is not compatible with current social distancing guidance. In the present privatised system, when we needed to reduce services during government lockdown, they ended up costing us more to run! The Scottish Government has already bailed-out failing private bus companies by more than £300m. This should be an opportunity to buy back our buses, so that they can be run in the public good for the long term.

There are many ways to improve the safety of our public transport. Public control is central to them all. If we own and run our own buses and trains, then we control the safety for staff and passengers. We can improve pay, conditions and training for staff. And, we can deliver far more frequent and reliable services for passengers to reduce overcrowding, and better plan the routes to speed-up journey times and minimise the need for interchange. We can upgrade the fleet to zero-emissions electric buses and make them more spacious, with air-conditioning and multiple entrances and exits.

We need to use this crisis as an opportunity to build back a far better public transport network, which actually serves our needs and helps us meet the many challenges of the decade ahead. Once the pandemic has passed, we will be faced with a massive economic crisis and a climate emergency that is not going away. Building a world-class, fully-integrated and accessible public transport network – free at the point of use – will provide the thousands of high quality, ready-to-go green jobs that we’ll urgently need for our city to make a just and green recovery.

• The ‘Imagine if Buses were free’ online conference launches the ‘Free Our City’ coalition on Saturday 19 September 2020, 11am-1pm twitter.com/FreeOurCityGla and facebook.com/FreeOurCityGlasgow
• Get Glasgow Moving, Glasgow Trades Council, Campaign Against Climate Change, Scottish Youth Climate Strike, Scot.E3, Glasgow Calls Out Polluters, and Divest Strathclyde came together in 2019 to demand free public transport for the Greater Glasgow region ahead of the United Nations Climate Change Conference (COP26) in Glasgow. When the coronavirus crisis meant COP26 was postponed until November 2021, we re-grouped and reformed to launch the ‘Free Our City’ coalition

Ellie Harrison is an artist and activist based in Glasgow. She is founder and co-ordinator of Bring Back British Rail and the current Chair of the Get Glasgow Moving public transport campaign.