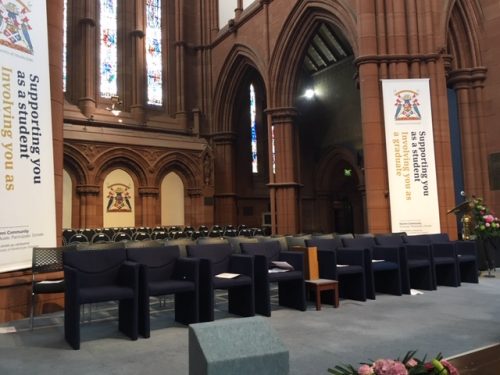 Sim took the opportunity to ask for funding to replace any lost fee income from the Scottish Government, because without it the financial decline of Scottish universities would get worse. Confirmation of that decline can be found in Audit Scotland’s 2016 report on Scotland’s universities. This shows a pattern similar to that found in the rest of Britain, with a few relatively secure big hitters, a lot more struggling to get by, and some on the verge of going under.

The Augur report is one of the latest attempts by successive Westminster governments since the Thatcher reforms of the 1980s to drive the development of universities in the direction of marketization and privatisation, a policy framework often referred to as ‘neo-liberalism’ by its critics. Despite its breadth, and a welcome attempt to address the underfunding of further and vocational education, the main focus of Augur was upon the relationship between cost, price and the labour market value of university qualifications. Accounting for university finances turned out to be more of a challenge than anticipated and Augur had to employ the international consultancy firm KPMG to try and work it out. Even then no one really knows if teaching subsidises research, or the other way around, or if science subjects subsidies humanities and social sciences, or the other way around, or if lucrative international student fees subsidise everything. Despite that, the drive towards marketization has been supported by the creation of the Office for Students (OfS) and the 2017 Higher Education Reform Act (HERA) which encourages private providers.

Although formally outside of the reach of these developments, with its own equally complicated administrative structures, Scotland’s universities are not immune to these marketization pressures. For example, Scottish universities participate in the Britain-wide Research Excellence Framework (REF), a funding competition that allocates money on the basis of published research and ranks competitors on the basis of who won most, and some participate in the Teaching Excellence Framework (TEF), a deeply flawed exercise which ranks universities on the basis of teaching quality and graduate earnings. The idea behind these exercises is that the rankings they produce will determine student choice of both university and subject of study, with the consequence that the losers will be eliminated through competition and demands on taxation reduced, which would happen irrespective of whether fees are charged or not. The survivors would be left to their own devices to obtain other financial resources.

These developments are not confined to Britain. Through international agencies such as the World Bank, the World Trade Organisation, the OECD and regional alliances such as the EU, these developments are promoted and organised at a global level. An unaccountable ‘global executive class’, which includes university managers, is interested in the ‘value capture’ of the broad knowledge wealth and assets produced by university workers and students. Within Britain, resistance to that became visible during the 2018 UCU strike in defence of pensions which grew to confront university managers over their betrayal and perversion of the public university function under the slogan ‘we are the university’, not least because of the work that academic workers are required to do in support of marketization which elbows out time for teaching and research.

Within Scotland, there is an opportunity to make opposition to marketization a structural feature of universities as a consequence of the 2016 Higher Education Governance (Scotland) Act introduced by the SNP government. Compliance with the act requires that the governing bodies of universities (‘courts’) become socially representative and include union participation. Despite the fact that failure to implement the act entails negative financial consequences, the managements of many Scottish universities are using all the tactics of delay and fudge they can muster to neutralise it.

Management opposition to the act might indicate that it’s a good thing as far as the democratic accountability and social responsibility of universities is concerned. It is, but it only goes so as far as the top end of formal university structures of power and rule. It is not able to drill down to the political reality of how universities are run, the level at which market supporting decisions are made and implemented. The characteristics of that reality were indicated in a previous Jimmy Reid Foundation publication in 2013 called The Democratic University in which the authors identified and opposed the emergence of Senior Management Teams (SMTs) composed of academic and non-academic managers as the unaccountable shadow executives of universities that govern through the rubber stamping of decisions. These SMTs have arisen because managers have seized the idea of university autonomy and used it as a justification for the old school Thatcherite assertion of ‘the right of managers to manage’.

Empowered in that way, SMTs resist scrutiny and accountability and determine the conduct of the bewildering variety of academic structures and procedures through which the conduct of universities is established. Consequently, the value of academic freedom is perverted as the privilege of managerial authority and the freedom of academics to criticise and oppose that is denied. Through direct and indirect monitoring and surveillance academics are accountable to SMTs, but not the other way around. In that way, and supported by the disciplinary sticks of employment law, academic conduct is driven to support SMT interests and the allocation of resources required to establish them.

The authors of the Jimmy Reid Foundation report call SMT domination the ‘corporate hegemony model’ (CHM). Derived from the writings of the Italian Marxist theorist and Communist politician imprisoned by Mussolini, Antonio Gramsci, the notion of hegemony refers to the balance of coercion and consent required to establish leadership. Extending the report’s analysis, it is important to recall that Gramsci argued that consent, in his case to Fascism, was achieved by the actions of subalterns, the so-called ‘NCOs’ of hegemony. Subalterns occupy a place in the command structure between the higher-ups (managers) and the rank-and-file (academics). SMTs are able to implement that through a divide and rule strategy in which academics are placed in decisive positions in return for supporting their policies. Not only does that replicate corporate ‘greasy pole’ politics and turf wars but universities also become less autonomous in relation to the environment which government shapes in order to manage them.

Changes in the internal authority of universities to reflect that are driven by managers who justify their actions as obedience to the rapid turnover of government policies and initiatives. SMTs recruit non-academic corporate managers to informal governance structures in order to demonstrate compliance with government, and especially marketing departments which represent universities in uniform marketing terms. In turn, the distinction between academics, government and the private sector becomes porous and elastic.

One consequence of that has been the increase of reports of bullying, harassment and intimidation and the deterioration of physical and mental health as rank-and-file academic workers struggle with the rising demands of teaching and research and orders to support the direction of marketization in a context in which collegiality has been replaced by pathological command and control-freakery.

One of the main ways that governments have shaped the activity of universities as economic actors has been through the expectation that they would contribute to the so-called ‘knowledge economy’. Because the results of that have been unreliable and disappointing in relation to the money universities received to do it, the emphasis has switched to the direct commodification of education itself. The upshot of that has been a variety of attempts to increase the exchange value of qualifications in labour markets, which in turn has distorted curricula without providing any guarantees that the work actually exists.

Similarly, in order to reduce academic labour costs curricula are being standardised in order to be converted into correspondence courses delivered through the internet. Again, although the results of so-called Massive Open Online Courses (MOOCS) have been pathetic and the push for their adoption has intensified, not least because the global flows of speculative financial capital that run through IT and internet firms that seek to expand into the ‘edu-tech’ sector. As well as rents from intellectual properties, universities will also provide data that can be used to control academics and students and commodified in Ponzi-scheme markets. Consequently, the price of a normal university education will rise, instituting a ‘bricks for the rich, clicks for the poor’ divide. University education will be ‘unbundled’ and ‘re-bundled’ in the same way as communication and utility services, with the same deliberately confusing tariff rates.

If changes to governance are intended to maintain the democratic and public character of universities and halt the invasion of marketization then they need to address the following issues. Managers have created a ‘them-and-us’ antagonism with rank-and-file academics which is supported by the excessive salaries they reward themselves with and the precarious status many of the latter are reduced to. If salary differences are narrowed, to a ratio of 6:1 say, then managers would have less incentive to implement marketization, and more to support the academic rank-and-file in a stewardship role, and help restore academic freedom and autonomy. Perhaps above all, the ambiguity around the ownership of universities needs to be resolved in order to destroy the illusion that it belongs to managers who enjoy the narcissistic claim that they ‘own’ the actions that they undertake. It would also set a limit to the commercial encroachment of university governance. For that reason, proposals for the creation of commonly owned co-operative universities have become prominent. The bottom line is that knowledge is a public asset and as such the conditions for its production, distribution and consumption should be shared as widely as possible in order to support social individuals in the creation of a knowledge society.

JV was formerly a lecturer at Queen Margaret University, Edinburgh. His recent paper for the Jimmy Reid Foundation called ‘Neo-liberalism and the new institutional politics of universities’, which he draws upon here, can be found at http://reidfoundation.org/2019/05/neo-liberalism-and-the-new-institutional-politics-of-universities-paper-now-available/