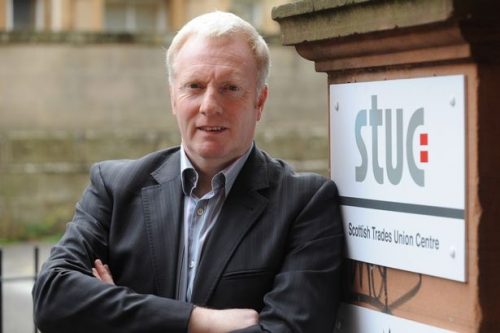 Writing a reflection on over thirty-four years working at an institution such as the Scottish Trade Unions Congress (STUC), including fourteen as its the General Secretary, is a significant challenge. It is a task I embark on with a high degree of reticence. Having considered the STUC’s role, impact, successes and failures, constantly over the past 34 years, I have little desire to rake over them now nor to engage in an exercise that could be viewed by some as one of self-justification, of displaying selective (or genuine) memory loss, or of attempting to rewrite history. There are plenty of STUC observers around with their own reflections of this period, who will be only too happy to pick apart anything I commit to paper. The following should, therefore, be read with all of that in mind.

What I would offer is that, throughout my time at the STUC, my overriding objective has been to ensure that my contribution has been true to the purpose of the STUC: ‘to co-ordinate, develop and articulate the views and policies of the trade union movement in Scotland reflecting the aspirations of trade unionists as workers and citizens’, and to support its General Council to the best of my abilities, as it has striven to advance the interests of the working class. It is for others to judge how effectively in this respect I have undertaken the various roles I have had the privilege to hold.

Of course, how the General Council, and the STUC Secretariat, has sought to fulfill the purpose of the STUC has been conditioned by the changing political, economic and industrial relations context in which it operated in this period.

More than two decades of Tory government; the deindustrialisation of the Scottish economy; the legislative attack on unions; the massive decline in union membership and collective bargaining; a decade of ‘new’ Labour government; the re-establishment of the Scottish Parliament; the ascension of the SNP; the referendum on independence; the increasing prominence of constitutional and identity politics and much, much more, have all been significant in shaping the context in which the STUC has operated.

For me, the hypothesis offered by Keith Aitken in his history of the STUC, called ‘The Bairns O’ Adam’ and published in 1997, is a helpful frame of reference in which to place my reflections on the past three decades. Keith argues that, from its inception, the STUC has been much more significant politically than industrially, that it has often played an influential, distinctive and often courageous role in shaping public policy and debate, but relatively rarely has affecting the outcome of industrial issues. He notes that this view is not popular amongst trade unionists.

Context, of course is important. However, certainly in relation to my time at the STUC, I consider this a rather false distinction, as are the ones often made between the STUC’s policy and political engagement role as opposed to its wider role in campaigning or developing workplace organisation. They are and have never been an either/or. They are mutually reinforcing.

The STUC doesn’t recruit and organise workers or collectively bargain on their behalf. Indeed, its affiliates are explicitly in their view that its activity must not cut-across established collective bargaining arrangements. Similarly, the STUC has no locus in instigating industrial disputes. However, creating an environment that supports unions in growing their membership and extending collective bargaining and winning disputes when they are unavoidable is its core business

What happens in workplaces, the power relationships between workers and employers, and how they play out, is and has always been the central focus of the STUC. In that sense, the STUC has always had a defining class dimension. There has not been a major industrial dispute in my time, indeed throughout its history, in which the STUC had not played an important role. Whether its coordinating movement solidarity and financial assistance; organising civic society support or public demonstrations; securing the required political interventions; and in more cases that would be apparent, conducting behind the scenes brokering, the STUC’s role has been significant. One of my earliest tasks as an Assistant Secretary was to coordinate the STUC’s support for, and to broker the resolution of, a major dispute over NHS privatisation.

There have been few if any major industrial job losses and closures where the STUC has not played a role. I and my colleagues have served on more Task Forces, established in response to the threat to jobs in companies across various manufacturing sub-sectors and beyond, than I care to remember. Many were instigated by the STUC. The political and community mobilisations that accompany these events has relied on the STUC to varying degrees.

The focus of the STUC’s policy development and political engagement activity has a direct workplace focus. It has been an overriding objective to place what happens in workplaces, the importance of unions and the advancement of workers’ class interests, at the heart of the public policy debate.

The development of the two-tier workforce protocol governing PFI/PPP projects; the Fair Employment Standard for the Scottish public sector; the Staff Governance Standards for the Scottish NHS and the college sector; and the Guidance on Good Employment Practice, agreed with the Federation of Small Business, are all examples of initiatives that paved the way for more recent achievements.

The Working Together Review; the Fair Work Convention and its Fair Work Framework; the current Scottish Government’s economic strategy, specifically in securing, as a key objective, the reduction in inequality and the critical importance in that regard of fair work, union membership and recognition and collective bargaining, were recently realised. This was through the development of a mechanism for political engagement built on trust and an appreciation of the substantial contribution the STUC makes to the development of policy based on the expertise drawn from unions and the workplace. The constructive (but in no ways complacent) relationship the STUC has with the current Scottish Government was required to be built with a party, not only without links to the union movement or a class perspective, but with a high degree of antipathy towards unions because of unions’ relationships with Labour.

The importance of the STUC’s recent work to support unions in developing their organising strategies and capacity has been commended by those involved in successful disputes. The Better than Zero campaign is linking unions with unorganised workers in precarious employment. Its union leaning activity, which provides work-based opportunities for around 9,000 workers every year, is a significant organising opportunity and is the product of the STUC’s successful political engagement strategy. The same can be said for the Union Modernisation Fund and the Leadership Equality Programme which are supporting unions in adapting to workplace change, driven by automation, the climate crisis and much more.

All the STUC’s major campaigns, domestic and international, of the last 30 years have had a political, industrial and union organising dimension, mutually reinforcing, with the emphasis on each dimension appropriate to the issue. The STUC’s numerous initiatives in support of devolution; its approach to the referendums on independence and Brexit and their outcome; its response to the poll tax; to austerity; to the refugee crisis; to Section 28, are all cases in point. Similarly, with the STUC’s international work. Be it Palestine, South Africa, the Iraq war, and more recently Colombia, active union solidarity and bi-lateral relationships have been combined with political lobbying and a sensitivity to potential industrial implications.

The STUC is about to enter a new era, located in a new home in a working-class community in Glasgow’s East End, with a new, dynamic General Secretary. While it will have new challenges to face and new opportunities to realise, its purpose remains the same. I am in no doubt that its history, bridging three centuries of class struggle, will continue to be an important reference point for the organisation as it strives to fulfil that purpose in the period ahead.