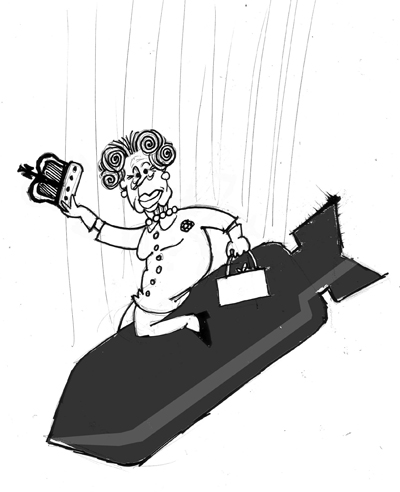 When constitutional change is under consideration, all of the protagonists have a responsibility to be clear about what would be involved in the particular model that they are proposing. You wouldn’t even want to buy a used car from someone who refused to reveal what went on under the bonnet.

In relation to the role and responsibilities of the Head of State, both sides of the independence debate have signally failed to come clean about what their proposals would actually involve. As regards the Better Together campaign, there is in fact a great deal that the public does not know about the powers of the present monarchy, and how these powers are exercised. Here are some examples.

The SNP should do something which it has signally failed to do so far, namely, to make a firm statement that an independent Scotland would not be bound by anything like the provisions of the UK Sovereign Grant Act

First of all, it is a little known fact that the Queen and Prince Charles, as the senior royals, have the right to be consulted and have to give their consent before any legislation is discussed in either the Westminster or Scottish parliaments, which potentially affects their hereditary revenues, personal property, or private interest.  It is now known, following a campaign waged by the Guardian and others, that the list of subject areas covered by this royal right is extraordinarily broad: for example, the royals have been consulted on Westminster legislation relating to such topics as higher education, paternity pay, identity cards, and child maintenance.  The Duchy of Cornwall was even consulted on the Apprenticeship Bill because the proposal to create a statutory basis for apprenticeships potentially affected the Duchy of Cornwall’s interests as an employer. We also know, from information released by the Scottish Parliament, that the royals had to be consulted in advance on Holyrood legislation on topics as diverse as salmon conservation, planning, the rights of relatives of mesothelioma (an asbestos related cancer) victims to compensation and the Bill to introduce a minimum price for alcohol in Scotland.

What is clear from this hard-won information, therefore, is that the royals do indeed have the right to be consulted in advance on a wide range of legislation. What the long-suffering British pubic is not permitted to know however, is the detail of how the royals exercise this right, and on what effect it has on legislation being passed. There is no doubt that the royals have the potential power to make a major impact on legislation: as pointed out in the guidance to civil servants finally released through freedom of information on 15 January 2013, if advanced consent from the royals is not forthcoming, then a major part of the relevant bill might be removed.

Another area where the royal family operates under the radar is in relation to freedom of information. In January 2011, special exemptions were written into the UK Freedom of Information Act granting absolute protection to the royals from public scrutiny. Scotland followed suit. So while we do know, for example, that Prince Charles writes extensively to government departments, and also has frequent meetings with Ministers and civil servants, the public has no way of knowing on what topics he is lobbying, or what effect he is having in influencing policy.

The SNP’s position is that an independent Scotland would retain the monarchy. In a booklet issued to help activists in the early 2000s they gave a little more detail as follows:

“The SNP proposes that the Queen and her successors remain Head of State, in the way that she is presently Head of State in fifteen other independent Commonwealth countries. The constitution which the SNP favours will define the powers of the Monarch, removing a number of her present powers, though she will still confirm Parliament’s nomination of a Prime Minister…. If, in the future, the people of Scotland wished to change these arrangements, they would be free to do so by amending the constitution through a referendum, and it is the SNP’s policy that the issue should be tested by such a referendum once Independence is fully in effect. Ultimately, the decision rests with the people of Scotland.”

In fact, in the detail in their recent White Paper, the Scottish Government did not specify which powers might be removed: the following questions about the SNP’s position on the monarchy therefore appear unresolved.

First, there is the question of whether the monarchy should retain its exemption from Freedom of Information. It seems clear that it should not. Intervention and correspondence by royals, if kept secret, could lead to abuse of power. Their position gives them huge powers of influence and of patronage, and they therefore cannot be seen as private individuals.  Since their influence comes ultimately from the state, they are intrinsically part of the state machinery, and their correspondence should therefore be as open as that of any other government department.

Second, should the monarchy have the right to be consulted, and to influence legislation at stages during the passage of a Bill? It seems clear they should not. Even if one accepted that the Queen had a right as head of state to be consulted on a few critical issues such as war, under what possible stretch of imagination could this extend to asbestos related disease or the price of alcohol. But in her capacity as a private individual, the monarch should get no more rights than any other private individual.

Third, there is the question of the status of the Queen in relation to taxes and subsidies. At present in the UK, the monarch is exempt from Inheritance Tax. This should clearly not continue in an independent Scotland.

Fourth, what is to be done about the Crown Estates in Scotland? Under UK stewardship, exercised by the Crown Estates Commissioners, we have seen the Crown Estate Commissioners acting primarily as a property investment company, putting the pursuit of profit before the interests of Scottish communities and the Scottish economy. One by-product has been years of disquiet and anger among Scotland’s coastal communities at the actions and inaction of the Commissioners. There is also an issue about the UK focus of the Crown Estate Commissioners in that their portfolio is seen as a UK entity with, for example, properties sold  in Scotland, and the resulting revenues used to buy property elsewhere in the UK. The recent recommendations by the Scottish Affairs Committee to devolve much greater control to Scotland were rebuffed by the UK government, with only fig leaf changes being made. In an independent Scotland with a continuing monarchy, would the crown estates be returned to the proper stewardship of the Scottish people, and managed by their representatives, that is, the Scottish Parliament?

Fifth, as regards the funding of the monarchy, the SNP needs to make it clear where it stands. At present, the most direct source of funding is through the provisions of the UK Sovereign Grant Act, which essentially hypothecates 15 per cent of the Crown Estate profits to the monarch, and which, in these times of austerity, still delivered a 16 per cent increase this year in the monarch’s income from the state. This does not, however, represent the total cost of the monarchy. For one thing, the cost of security is not included in the above, and these costs are substantial. The single event of the marriage of Zara Phillips, the Queen’s granddaughter, in Edinburgh, cost the Scottish police £400,000. In addition, it is clear that the UK monarchy also gets substantial support in the form of upkeep of royal parks, and the services of government departments like the Foreign Office and the Ministry of Defence (though the amounts involved are never precisely identified or added up).

The SNP really need to be clear about just how Scotland would fund its head of state. In particular, it seems unthinkable that an independent Scotland would agree to an open-ended commitment to hand over a percentage of the revenues or profits from Scotland’s public estate and seabed. So the SNP should do something which it has signally failed to do so far, namely, to make a firm statement that an independent Scotland would not be bound by anything like the provisions of the UK Sovereign Grant Act. There are, in fact, good precedents in the shape of other Commonwealth countries, on how the monarchy should be paid for. Australia and New Zealand, for example, pay only those costs associated with functions actually carried out by the monarchy in those countries’ own territory. The SNP should make a firm commitment that, if Scotland votes to continue with the monarchy, it should adopt the same principle.

Overall, therefore, we have seen that, as regards the vitally important question of the head of state, both sides in the independence debate are failing to tell the electorate what their particular constitutional model would imply.

This is not merely bizarre: it also represents a major missed opportunity on the part of the SNP. Suppose the SNP had addressed the questions identified above, and had put forward a platform where the role, powers, influence, and funding of the Scottish head of state (whether the existing monarch or a president) had been fully set out and specified. The SNP would then be in a strong position to challenge the unionists to come clean on what the existing powers and influence of the UK monarchy actually are – powers and influence which, as we have seen, the UK public is currently prevented from knowing. The unionist response could take one of two possible forms. Either they would refuse to divulge this information – a stance which would count against them in the independence campaign. Or, for the first time, the UK public would be granted a clear statement of the actual powers and costs of the monarchy: this would be something which would be beneficial in its own right. And if, as the available circumstantial evidence strongly suggests, the monarchy is actually currently exercising undue power and influence, confirmation of this would again play badly for the unionists in the independence debate.

So come on SNP. There is an open goal here waiting for you to score.