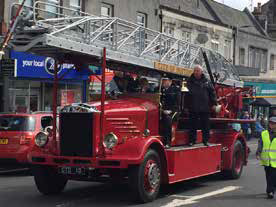 David Adams outlines how and why fire engines have developed over the years.

The Scottish Fire and Rescue Service Heritage Trust, which is affiliated to the Scottish Fire and Rescue Service (SF&RS), and is a registered Scottish Charity (SCO43929), operates a preservation through operation policy, whereby our fleet of historical fire engines is kept in a mechanically sound and roadworthy condition. This allows the trust to provide a living museum facility where we take our vehicles and other exhibits to the public. It is the policy of the trust to support events in the community, especially those with a charitable cause. The Firefighter Charity and the Scottish F&RS Family Support Trust are the two main recipients of the Trust’s efforts. In addition, to staging our own Fire Engine rally’s and other events, the Trust attends over one hundred events annually including Fire Station Open Days, gala days, fetes and public displays.

The Heritage Trust works in conjunction with the Community Safety departments of the SF&RS, demonstrating how the history of the fire service has contributed to public safety throughout the years. In partnership with the SF&RS and Inverclyde Council, the Trust manages and runs the Greenock Fire Museum and Heritage Centre. The museum which is located in the old Victorian Fire Station in Dalrymble Street, Greenock, opened in 2013 and allows the Trust to showcase its collection of vintage fire engines, uniforms, and equipment, and brings to life the stories of the firefighters and their families who lived and worked there. The museum which is run and staffed entirely by trust volunteers has already received a 4 Star Visit Scotland rating, and received an award from Greenock Chamber of Commerce ‘as best Ambassadors for the Inverclyde Area attracting the most tourists’.

A major part of the Trusts work is the restoration, conservation and preservation of old fire engines, the history of the development of fire engines and the associated firefighter’s safety throughout the years. Traditionally fire engines were steam powered and horse drawn. The technology of firefighting took a major step forward in the early 1900s with the innovation of the internal combustion engine as this allowed the development of self-propelled fire engines and higher-pressure pumps which could deliver higher volumes of water, making firefighting more effective. The design of fire engines was still influenced by the traditional horse drawn appliances with crew standing on the side of the engine while attending fires.

It was not until the 1930s when the limousine design of fire engines became more common. This innovation allowed the fire crew to sit in an enclosed cab, protected from the elements and proceeding to fires in a safer manner. Some of the larger fire appliances such as turntable ladders were still manufactured with unenclosed cabs up until the 1940s. From the 1950s onward, the enclosed crew cab, offering greater protection to the crew became the norm. These appliances were still traditionally built, with a metal skin over a timber frame. This type of design offered the crew little protection in the event of a serious collision or accident. It was only from the early 1980s that crew safety was seriously considered in the design of fire engine crew cabs. This meant cabs were now being fitted with seatbelts, metal framed and antiroll bars as standard.

From 1947, fire engine design in Britain was regulated by the Joint Council for Design and Development, under the direction of Central Fire Brigades Advisory Committee (CFBAC). In 2000, the CFBAC was disbanded and from then on fire appliance design and the associated safety standards became virtually unregulated. In 2001, a draft European Directive (BSEN 1846 part 1 and 2) set future standards for fire appliance design.

In May 2008, the FBU in cognisance of issues of health, safety and wellbeing, produced a document detailing the elements for the design of crew cabs for fire engines. This document provided valuable guidance in the development of crew safety cab design for fire appliances. In order to meet the safety requirements of contemporary fire engines, in 2017 the London Fire Brigade produced a prototype design for the safety of crews in fire appliances. The design incorporated a crew cab which was purposely planned for the comfort and safety of firefighters. The design considers the means to make driving through heavy city traffic safer, including lower engine emissions. Less equipment is now stored within the crew cab area, with heavy and bulky items of equipment being stored in lockers to the rear of the fire engine. All modern fire appliances are now designed with the safety of the crew paramount.

Dave Adam is chair of the Scottish F&RS Heritage Trust.

From Scotland to Gaza with much love, favour and affection