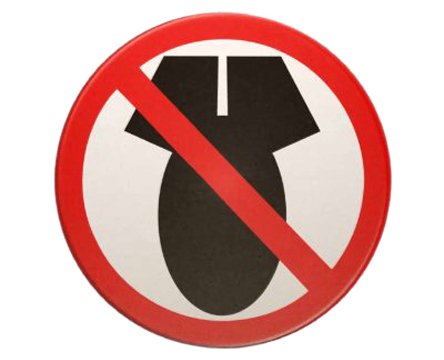 In 1984, New Zealand shocked its Western allies when its incoming Labour Government rejected nuclear deterrence and prohibited nuclear weapons from its territories and waters – effectively barring the visit of any more nuclear-armed and powered ships into its harbours. The new policy – enshrined in legislation in 1987 – was vehemently opposed by the US, Australia and the UK, leading to a break-down in ANZUS – a military alliance of Australia, New Zealand and the US – and intense political pressure on New Zealand to reverse its policy.

The Australian Labour Party, elected into office a few months prior to the New Zealand Labour government, had also campaigned on a nuclear-free policy. However, once in power, the Australian Labour Government, possibly persuaded by political pressure from the US, dropped its policy and reaffirmed its acceptance of US extended nuclear deterrence – a policy which continues to today.

With a referendum on Scottish independence on the horizon in 2014, and a strong policy against nuclear weapons already reflected in the Scottish Government and Parliament, a key question must be whether an independent Scotland would be able to emulate the New Zealand experience and kick out the nuclear UK weapons based in Faslane, or whether like Australia, the government would succumb to political ‘realism’ and pressure from the United Kingdom to allow the nuclear weapons to stay.

The Scottish role in the UK nuclear weapons infrastructure is, of course, not the same as that of New Zealand – which was not a home-port for US or UK nuclear-armed ships. However, the political significance – and thus the degree of political pressure that would likely be employed to prevent a nuclear-weapons ban in Scotland – is comparable. The New Zealand stand was a direct challenge to the legitimacy of nuclear deterrence in the Western alliance during the last years of the Cold War in the 1980s and in the New World Order of the 1990s.  A Scottish ban would be a direct challenge to the legitimacy of the UK nuclear deterrent – and to nuclear deterrence itself in the new 21st Century security environment.

New Zealand was not historically an anti-nuclear nation. At the birth of the nuclear age the New Zealand government and public were enthusiastic supporters of the bomb – even proud of the part they had played in its development. New Zealander Ernest Rutherford, the first person to split the atom, still features on the New Zealand $100 bill. When the United States dropped the atom bomb on Hiroshima and Nagasaki, New Zealanders celebrated in the streets. Japan’s war machine had moved down through Southeast Asia and was close to invading Australia and New Zealand. From New Zealand’s perspective, the nuclear bombs brought an end to the horrific war and saved them from Japanese invasion.

With the emerging military power of the Soviet Union posing a similar expansionist threat following the Second World War, New Zealand readily supported the build-up of the Western nuclear deterrent — and sought protection from it. New Zealand sought and gained a security treaty with the United States and Australia (the ANZUS Treaty), signed in 1951. New Zealand also entered into a range of cooperative security and intelligence arrangements, primarily with Australia, Canada, France, the United Kingdom, and the United States, but also with some of the Southeast Asian countries under the Southeast Asia Treaty Organization (SEATO). As part of these security relationships, the New Zealand government and most New Zealanders welcomed the nuclear tests conducted during the 1950s and early 1960s by the United States in the Marshall Islands and by the United Kingdom in Australia and the Christmas Islands.

On 9 May 1973, Australia, New Zealand, and some other Pacific Island states instituted legal action in the International Court of Justice (ICJ) on the grounds that the radioactive fallout from the tests violated their territorial integrity. They achieved an interim injunction against the French tests while the case was being considered. In 1974, France announced an end to atmospheric testing, and that they instead would test underground.

The success of the 1974 case against nuclear testing was one of the factors that gave New Zealand confidence to challenge nuclear deterrence itself a decade later. But it was not the only factor that ensured success of the policy. Civil society and parliamentary action were also crucial. Despite the mounting concern over nuclear tests, there remained strong political support for nuclear deterrence from the conservative party which was in government during the late 1970s and early 1980s.

The Rt Hon Robert Muldoon (Prime Minister from 1975 – 1984) was unrepentantly pro-nuclear. He welcomed visits of nuclear-armed warships, and even argued that the United States was not bold enough in its nuclear doctrine, telling the United States that its defeat in Vietnam was the result of its unwillingness to use nuclear weapons. The public remained split between the right, which mostly supported the nuclear warship visits, and the left, which mostly opposed them.

In 1981, a new tactic of establishing cities as nuclear weapon–free zones (NWFZs) began to cut across the right-left divide, forcing mayors and councilors to consider the effects of nuclear-weapons-use on their cities, and their responsibility to protect their cities from such a crime. This built a legal and political norm against nuclear weapons, city by city. By the 1984 general election, over 66 percent of New Zealanders lived in NWFZs – providing strong constituent support for the Labour Party policy – a factor that was useful to the anti-nuclear Labour Government in deflecting some of the pressure to drop its anti-nuclear policy.

The pressure was indeed intense, including demotion from US ally to ‘friend’, curtailment of military cooperation, threats to trade from the US and UK (including a short-lived trade boycott from the US), attempts to destabilise the Labour government and diplomatic ostracism from the Western group.

However such pressure was countered by strong support from peace movements in the UK and the US (including a girl-cott campaign in the US to counter the trade boycott) and an endless stream of supportive letters from US and UK citizens in NZ papers – a number of which Prime Minister Lange tabled in parliament.

New Zealand’s stand became one of national pride and international benefit. The publicity helped overseas trade – especially following the Chernobyl disaster as New Zealand was known to be clean, green and nuclear-free. Trade with the United States doubled in the five years following the adoption of the anti-nuclear legislation in 1987. International admiration for the principled stand helped New Zealand in the United Nations, including in achieving a non-permanent seat on the Security Council in 1992.

And in walking away from the nuclear umbrella, New Zealand had to rethink its defence and security framework – thus reducing the emphasis on military security and coalition action, and increasing its reliance on cooperative security and international law through the United Nations. As such, New Zealand’s military forces were restructured to phase out offensive capabilities such as strike aircraft and frigates, in favour of forces more suited to territorial defence, fisheries protection and UN peacekeeping roles.

Probably the most significant shift was in New Zealand public opinion and political support for the nuclear ban. When Labour entered government in 1984 public support for a nuclear ban was a slim majority. The conservative National Party (the former governing party and the main opposition) was adamantly opposed to the nuclear ban.

By 1990, the benefits of being nuclear-weapons-free had swung public opinion solidly in favour of the ban – and all political parties including National were supportive, despite the continued opposition to the ban by the United States.