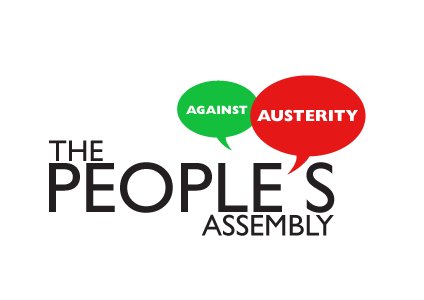 In promoting over 50 screenings of the award-winning film I, Daniel Blake, the People’s Assembly in Scotland facilitated over 7,000 people from Aberdeen to Berwick to view it. Venues included community centres, clubs, union offices, churches, town halls, and cafes. Not bad for a film that can be bought for less than a tenner in most supermarkets.

It stands out as it tells a story hidden in mainstream media but is a daily reality for many in Britain. Depicting the struggle of claimants – one with a serious heart condition and a single mother denied benefits – it moved many to tears. In laying bare personal tragedies created by the benefit system, it depicts not a benefits system working dysfunctionally but one working exactly the way this government intends, namely, one that makes it difficult for citizens to claim that which is rightfully theirs. It also creates division between claimants and those in low paid precarious work.

Contributions from those with personal experience of the iniquitous sanctions regime highlighted how the film did not tell a horrific enough story, harrowing though it was. Comments heard most often were: ‘That’s me’ or ‘That could be me, my sister or my family’. All could identify with the characters. No one said it was exaggerated and what we heard was genuine concern for Daniel and Katie and her kids.

Screenings offered the People’s Assembly and local campaigners an audience to recruit for future activity. Importantly, they gave PCS activists an opportunity to highlight difficulties faced by low paid DWP workers in imposing sanctions, if targets were not met and being too sympathetic to claimants.
Encouragingly folk wanted to help the Daniels and Katies in their communities. All screenings were free though those who could afford to do so were asked to bring a donation either in goods or cash donations for local foodbanks.

Organisationally, it was not difficult. The distributors were emailed dates, venue details and the local contacts addresses. DVDs were sent promptly ensuring compatibility with equipment and returned along with payment afterwards. Screenings cost £72 [£60 licence + £12 VAT] and this cost was with few exceptions covered by sponsorship from union branches, accommodation was either provided free or sponsorship was provided. Special mention should go to UNITE community union section for creating a bank of equipment for the movement’s use.

That the People’s Assembly organised screenings is not surprising, given that most unions in Scotland are affiliates as are political and community groups. Both the Labour Party’s Campaign for Socialism and SNP Trade Union Group are represented on the Scottish steering group of the People’s Assembly. Indeed, the Peoples’ Assembly in Scotland is perhaps the only organisation that can rightly claim to be the broadest based group opposing austerity.

With its key demands deliberately focused on the concerns of working class families, it offers an opportunity to campaign on issues rather than constitutional arrangements. These are i) a fairer economy for a fairer Scotland; ii) more and better jobs; iii) high standard social housing; iv) protect and improve public services; v) fairness and justice; and vi) a secure and sustainable future.

Local people’s assemblies, based around trades councils, are in the forefront of campaigns in support of claimants unjustly sanctioned by the DWP, highlighting and opposing cuts in local services, anti-fracking and environmental concerns. These local groups are re-establishing the links that previously existed between unions and working class communities where typically it was the local works convener who was secretary or chair of the local tenant’s association.

All council group leaders and every councillor this year received our Peoples’ Manifesto, highlighting the implications for communities if proposed cuts and job losses were implemented. We offered alternatives and assistance in creating budgets that halted any more cuts as well as expanding services. Above all we asked that councillors worked with their communities to capitalise upon the anger people feel about the devastating effect cuts have on the poor and disabled. In doing so, we encouraged them to become part of the resistance.

Both North Ayrshire and Renfrewshire have set no cuts budgets and are expanding services. This should happen elsewhere. The People’s Assembly Scotland is not anti-councillors. It is an ally if councillors listen to voter’s concerns.

Ken Loach should be thanked for making his film available as a campaigning tool. It shows the power of the arts in moving people’s hearts and minds and increasing participation in struggle. Those attending screenings of I, Daniel Blake included those unlikely to attend a ‘political’ meeting. They came because of the positive publicity that the film received. The film made people angry and we should focus this anger to where it belongs – not on the DWP worker in receipt of tax credits after years of zero pay rises but at the governments in Westminster, Holyrood and Brussels who are the architects of ‘our’ austerity via the neo-liberal Lisbon treaty.