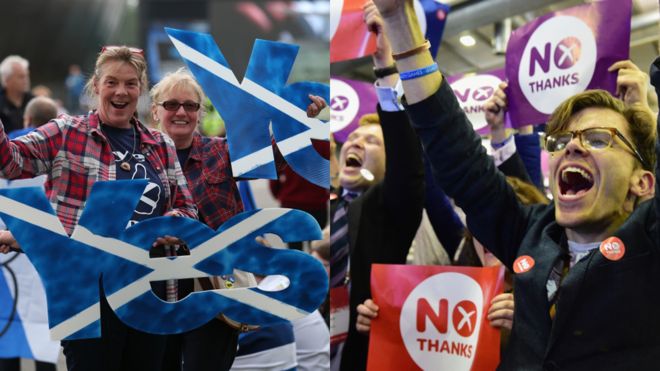 John Foster argues we are at a crossroads after the referendum

The referendum transformed Scottish politics. It is, however, neither accurate nor politically useful to characterise it as a triumph of nation over class. It was precisely the combination of class sentiment and national identification which made the movement so powerful and which today defines its potential both for progressive change and also for populist reversal.

In the referendum, the slogans which won support from Scotland’s most impoverished communities were those which denounced austerity as an imposition of an external Westminster elite. Benefit cuts, sanctions and falling real wages were posed as a product of both class and national oppression.

The result was to add another 20% of principally working class supporters to the existing nationalist core vote – voters who as recently as the 2012 local elections had been overwhelmingly Labour. This process was carried even further in the general election. This growth in support for independence and the SNP cannot, therefore, be detached from a mass perception of class injustice resulting from existing constitutional arrangements.

Yet it was also a weak and unstructured perception. It failed to distinguish the slogans of the referendum from what was on offer. Sterling, NATO and the EU involved endorsing exactly the same neo-liberal, pro-big business framework that determined policies in Westminster. The manifest feeling of class injustice was not matched by an understanding of the class power that enforced these policies. Nor is this surprising. To a great degree it reflected more than two decades in which Labour retreated from any class analysis and endorsed exactly the same institutional framework as that called for by the SNP – and did so in a society where union density has fallen to near half its previous level.

In some ways there is some resemblance to the transformation of voting behaviour elsewhere in Europe. In Greece, Italy and Spain mass parties have emerged calling for the rejection of austerity while at the same time not seeking to challenge existing institutions.

In Scotland, this situation holds very considerable dangers. The SNP is both a populist and nationalist party which is in the privileged position of being able, for the next five years, to deflect blame for austerity to Westminster.

At the same time, it also seeks to remodel basic attitudes. It invites the Scottish union movement to endorse institutions of social partnership within a wider perspective of a European Union that defends working people and the associated prospect of developing a West German model of capitalism in Scotland that, according to Sturgeon combines ‘competitive markets with strong social protection and partnership’ (Scotsman 13 June 2015).

This poses a significant challenge to the left in Scotland. Some sections seem disposed to ride on this populist tiger – in the hope that a future crisis will offer opportunities for a socialist challenge. More seriously, there are indications that sections of the union movement see immediate practical benefits in responding to the Scottish government’s partnership model.

In both cases the danger is that Scottish politics will become increasingly insulated from wider struggles at British level – struggles which have the potential, but so far only that, to expose the class character of the British state and to redevelop a class-based mass movement.

There are indeed some similarities between the mass base of the new Corbyn leadership of Labour Party and the populist movements on the continent. The 250,000 Corbyn supporters are, it would seem, largely individuals responding individually to the crisis of austerity. But there are also three major differences. First, Corbyn’s election programme – this contained at least some systemic challenges to the existing order. Second, close links to the union movement. Third, the depth of the Conservative government’s attack on both working people and the union movement itself, a level of class extremism that betrays significant over-confidence.

In some ways the 2014 referendum represented the first mass upsurge of rejection of neo-liberal austerity policies in Britain. That potential still exists. But it is currently being recalibrated in a nationalist direction. Scotland, it is argued, is different. Scottish capitalism will be different.

This is the danger we now face. In immediate practical terms there are the cuts that will be imposed on local government over the coming months. How far can the People’s Assembly and the union movement together develop a resistance, involving some class critique of the Scottish government, that links with similar movements elsewhere? How far can this redevelop a broader union and labour movement campaigning across communities, stressing the importance of organisational strength and class understanding?

The 2014 referendum did not mark the triumph of nation over class. However, its aftermath could – in terms of the triumph of populist nationalism. But the Scottish rejection of austerity could equally add strength to a movement that has the potential to redevelop class politics and expose the class character of the British state and of the European Union.

The overwhelmingly majority of the Scottish radical left supported ‘yes’ in the referendum and was right to do so. Socialist supporters of a ‘no’, centred around the remnants of the Labour left, had no way of relating to those newly radicalised by the ‘yes’ campaign, except to denounce their ‘nationalism’ and castigate the bourgeois nature of the SNP – something most of us were quite aware of. They have since paid the price.

One of the reasons why there has been no Scottish Labour ‘Corbyn bounce’ is the party so thoroughly alienated potential supporters that many migrated to the SNP, the Scottish Greens or RISE. Corbyn-mania is the English equivalent of radical independence but has come too late. Nevertheless, left arguments for ‘no’ still abound. In essence there are two.

The first is calling for independence automatically means ‘capitulating to nationalism’. Nationalism is about establishing new states and defending existing ones, so arguing for maintaining the United Kingdom is no less ‘nationalist’ than arguing for Scottish secession from it. These left opponents argue maintaining the unity of the British state is driven not by British nationalism but by class considerations. Why then do they find it so difficult to accept proponents of a Scottish state might have precisely the same distance from Scottish nationalism?

As a political ideology, nationalism involves two inescapable principles: the national group should have its own state, regardless of social consequences; and what unites the national group is more significant than what divides it like class. Neither of these principles animated ‘yes’ campaigners, who saw establishing a Scottish state, not as an eternal goal to be pursued in all circumstances, but as one which offered better opportunities for equality and social justice in the era of neo-liberal austerity –in other words as a way of conducting the class struggle, not denying its existence.

Voter registration drives in working-class communities were one aspect of this. Even unionist opinion-makers in London felt obliged to report the packed public meetings, debates in pubs and so on. For the ‘yes’ campaign marking the ballot paper was merely the final moment in months of debate and activity so that it needs to be seen as a social movement, not merely another political campaign. Its closest comparisons are therefore not to be found in Scottish history, but in contemporary Spain and Greece.

But there were weaknesses in the campaign. One was an inadequate focus on skilled and organised workers in their workplaces. Unorganised or precarious workers could be reached in their communities but where workers were faced with an alliance of employers and unions arguing for ‘no’ (as in defence-related industries) response was required to challenge this even if this had to be mounted from outside. Failure to reach, let alone convince, organised sections of workers at least contributed towards the ‘no’ victory.

The second argument was the referendum merely concerned constitutional issues, and whatever the result it would leave the situation of workers fundamentally unchanged, but potentially with a divided British working class. With claims of irrelevance, it’s usually good to examine the attitudes of the ruling class. Who stood behind ‘no’? The supposedly neutral institutions of the British state; most British capitalists; UKIP, BNP, Orange Order; the entire press bar the Sunday Herald; the US President; EU Commission; and rulers of nation-states with insurgent minority national movements like Spain. In short, Unionists were supported by the British and international capitalist class.

Keeping this company, the ‘no’ left should have asked itself whether this motley crew could have misunderstood its class interests for preserving the unity of the British labour movement is surely not one of them. And, for two weeks before 18 September 2014, the ‘yes’ campaign reduced the British ruling class to a panic unparalleled since the 1984-1985 miners’ strike. If the referendum was so irrelevant, why were they so concerned?

A ‘yes’ vote, achieved on the basis of a mass left-wing insurgency, would have immediately changed the balance of class forces and open up a new possibilities. In a capitalist society, all politics is by definition ‘bourgeois’ unless working-class interests are forced onto agendas which would otherwise exclude them.

What of the future? The main impetus for ‘yes’ was not nationalism but social change expressed through the demand for self-determination. The danger is it will now become nationalist if the movement becomes an SNP electoral support-group. Thousands of mainly working-class people who joined the SNP will change its inner dynamics, but not its overall character as mildly reformist on the left wing of the social neoliberal spectrum. This is why a left opposition to the SNP is of such importance. Deranged by its sectarian SNP hatred, Labour cannot simultaneously oppose the latter party and attempt to win over its new, and highly conditional membership, but the radical left can.

Meantime, whatever respective attitudes to independence, there are a whole range of issues –defending unions and welfare state, opposition to fracking and nuclear weapons – on which the ‘yes’ and ‘no’ left can and must unite.