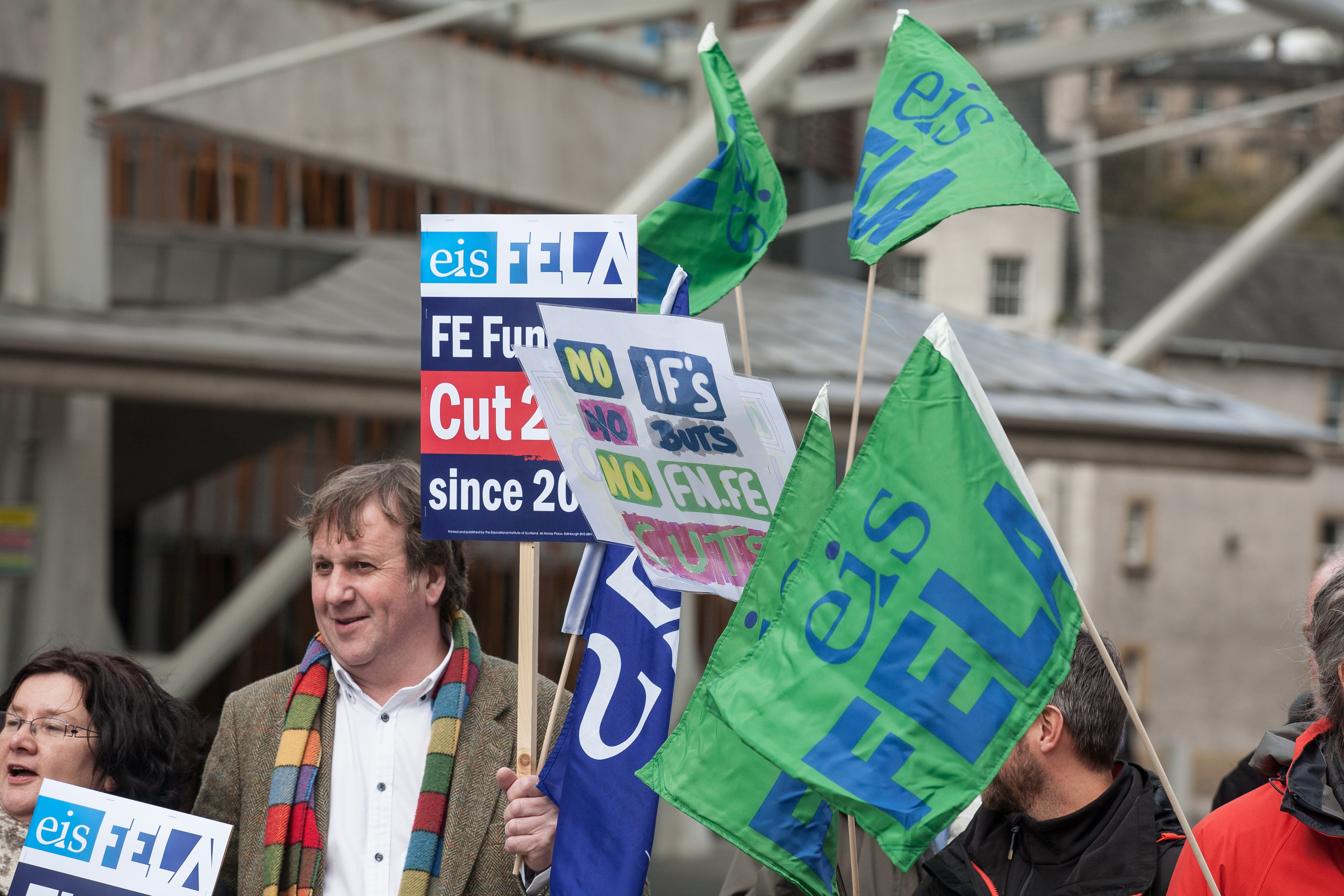 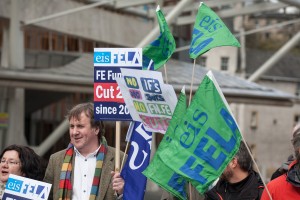 The Scottish Government’s focus on employability and, in particular, on young people whilst understandable at one level has led to a 41% cut since 2008-2009 in the number of over 25s accessing college courses – this in a sector which is crucial in supporting lifelong learning and second opportunities. Perhaps of even greater concern is the impact of policy decisions on students with additional support needs where the figures have dropped from 19,622 in 2009-2010 to 14,887 only three years later.

As this short summary indicates, the cuts in FE have been manifest and damaging. The level of cuts, and the shift in emphasis in age profile and mode of attendance has firmly slammed the door shut on opportunity for many, particularly those in employment seeking part-time courses, those over 24 years old and those with learning disabilities.

At the same time, the sector has undergone significant restructuring (called ‘regionalisation’) which has added to the sense of unease. The regionalisation process was not necessarily unwelcome in itself as it could have led to better run colleges with fewer managers and better governance, particularly given the weak college governance and evident managerialism which existed before the Post-16 Education Act.

However, whilst the Scottish Government’s stated intention in the Post-16 Education Act was to deliver more transparent and accountable governance, it was also clear that for the Scottish Government efficiency savings from college mergers in the regionalisation process was a significant driver. And, a huge question mark remains as to the extent to which these aims have been realised.

Put simply, there is no evidence that college governance or management has been improved by mergers. According to the Audit Scotland report, there is evidence that some colleges merged too quickly and that their merged systems created additional problems for students.

One way in which accountability and transparency was to be improved in the new governance structure was for the government to nominate the chair of each region’s FE regional body or college, and for that person to be accountable to ministers – and hence to parliament. The new chairs were to counter the managerialism of the principals and their senior management teams dominating college boards. Thus far, the new Chairs do not seem to be reining in the principals – who seem to be fewer in number but more powerful since they run bigger colleges.

Regionalisation – together with outcome agreements and other aspects of the Post-16 Education Act such as direct nomination of government of regional college chairs – has certainly brought the FE sector into the closer control of the Scottish Government. But that simply begs the question as to how that greater control is to be exercised and for what purposes. The recent movement of nearly £100m of college reserves into arms-length foundations at a time of cuts is a case in point.

Mergers, while not necessarily a bad thing in themselves, have been used as a cloak to cover the cuts in provision across the sector. A fundamental flaw has been the absence of any real educational rationale underpinning the mergers. Most colleges pre-merger declared themselves to be ‘community’ colleges or at least colleges which served their local communities. The larger organisations are finding this more difficult to achieve due to detachment from those communities. Unfortunately, the restructuring of the sector seems to have led to added layers of bureaucracy and, in many cases, a less responsive approach to local needs coupled with a management-style focussed upon delivery and organisation rather than a more collegiate approach.

A particular concern is the faltering progress with regard to a return to national bargaining. Whilst early developments were promising, and a National Recognition and Procedure Agreement developed, the process now seems to be bogged down in a stand-off between colleges and government on funding. Scottish Government pressure on colleges to deliver national bargaining needs to increase or the single shining light of the past few years may be extinguished. Political intervention is required and urgently.

The Scottish Government also needs to secure increased funding for the sector. It needs to recognise the value of FE, not only in terms of employability, but also in terms of lifelong learning. The sector has to be used to provide opportunity for those in employment and those with learning difficulties, for example. And in terms of governance, colleges have to engage in partnership with their staff, and unions have to be recognised and valued in this process. A more collegiate approach to teaching and organisation has to be recovered from the past.

In many areas of education, Scotland’s approach compares positively with that of England but in relation to colleges the commonality of concern across all of Britain about cuts, jobs, access and governance is an indication that improvements are still required.