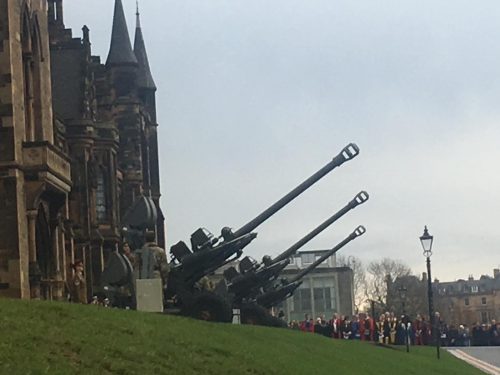 Nicola Sturgeon has taken those in the independence movement into a mental and emotional trench. I had hoped they would clamber out of the trench when her speech on 31 January 2020 indicated acceptance of reality – no indyref2 this year. But they stayed in it, and she has joined them again, saying, as reported in the Sunday Times (16 February 2020), it is still possible.

In that trench they shout encouragement to each other, and seize on any implausible idea of how they might circumvent the requirement of a Section 30 Order denied to them by Boris Johnson. It would be useful if someone popped a head above the parapet and looked at the reality.

All the chatter in Scotland is about Holyrood’s right to hold indyref2. But of the two parliaments – Holyrood and Westminster – only the latter faces no legal or constitutional barriers to legislate for, organise and hold a referendum on Scotland’s constitutional future. As I have noted elsewhere, while Nicola has been marching ‘yes’ banners up and down the country for three years, others have been thinking.

Down south, the Constitutional Reform Group produced an Act of Union Bill, tabled in the House of Lords by Lord Lisvane, the former Chief Clerk of the House of Commons, no slouch on legal and constitutional matters. It aims at a ‘federal’ type of fundamental change to the way Britain is governed – with separate parliaments for Scotland, England and Wales, Northern Ireland continuing with its assembly, abolition of the House of Lords and replacement with a revising body partly elected. It’s first clause gives each nation the right to opt by leaving the union. Never meant to become an Act, its purpose is to start people thinking. And they are.

The ‘federalist’ idea has been picked up by several Tory thinkers and columnist opinion formers as the way to stymie Scottish independence. Right now, federalism is not a runner. Johnson has obviously adopted the other idea coming out of Tory thinking: that the British government should exercise its authority under S28(7) of the Scotland Act 1998 to ‘love bomb’ us, and by-pass the Scottish government with projects it will fund. The idea is replete with difficulty, not least of which is that we don’t like the suitor. Whatever is tried will not scupper the demand for independence.

Given that Johnson and Cummings, as the Treasury has found, can think and act outside the orthodox box, it is not beyond the bounds of the possible that, when the love bombing fails, they will turn to the federalist idea. If that happens, and Downing Street decided to give us the much demanded indyref2, it could hold the referendum itself on ‘independence v federalism’, or make that question a condition of granting Holyrood a Section 30 Order. Could the independence movement complain about either, given the ballot would include independence?

What argument could we mount for independence against the federalist offering with its attraction of no border, continued membership of a single market and customs union, no currency problem, no state pension or nationality problem, and all with the add-on of more powers to Holyrood?

We need to start with what ‘federal’ means. Is it the division of sovereignty, where the central authority can exercise it in only certain areas, while the constituent parts exercise it in others over which the central authority has no power? That requires a written constitution, and a clear division of sovereignty. That is the case with the US constitution, although even there a tussle exists between federal and state governments on many matters, with the Supreme Court, a federal institution, the final arbiter.

Sovereignty is different from power. The Lisvane Bill allocates much more power to Scotland, but emphasises that ‘sovereignty’ is retained by Westminster. So, it is isn’t really federalism at all – but an extended ‘Devo-Max’. Whatever the new powers so allocated, the people of Scotland would not be able to act as they wish, and as they could, with the sovereignty denied them. In policy areas such as international relations, defence, Bank of England control of monetary policy, trade, some direct and other indirect taxes, labour law and corporate law, a ‘Devo-Max’ Scottish Parliament would still be shut out of crucial areas of importance to our economy and society.

But we should not kid ourselves that the argument for genuine sovereignty through independence, against the seductive allure of what Jack McConnell (a supporter of the Lisvane Bill) once called ‘Independence in the UK,’ is going to be an easy one unless people in the movement start thinking about it now. Yes, of course, Johnson may keep ‘love bombing’ us and not reach for that alternative. But if he wants it, it is there, and we should be well prepared, just in case.

Jim Sillars is a former Labour and SNP MP and is currently writing his memoirs.