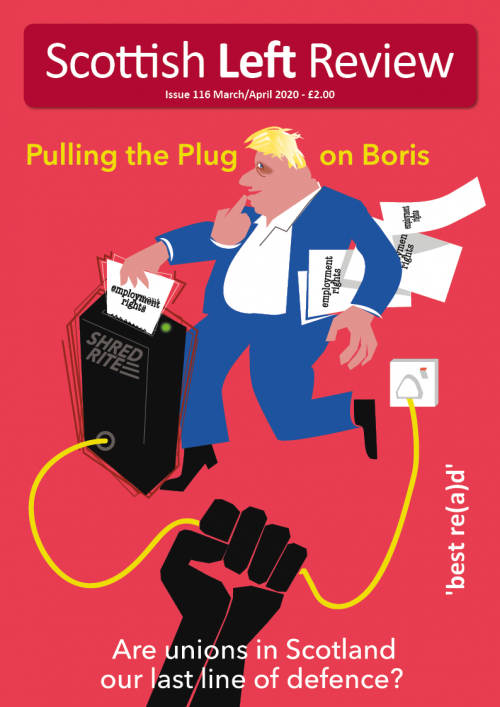 Working out where we go from here

The outcome of the general election last year means Scotland enters yet another critical period in its modern history and its continuing search for a just and decent social democratic society. Though politics is about much more than just constitutional options, it is becoming increasingly clear to many that the advancement of progressive politics in Scotland is only likely to happen under a different, future constitutional settlement. But which one is that and how does the left develop a consensus on the issues at hand? That is a matter of continuing and fierce debate on the left in Scotland.

In line with the joint statement released by the Scottish Left Review and its sister organisation, the Jimmy Reid Foundation, in February, we would hope that the right to have the means by which people in Scotland can democratically and legitimately decide upon that future for Scotland is of far less contention. The statement reads: ‘We assert our belief in the right of the people of Scotland to determine their own future and therefore, whilst maintaining our stance of not taking a position on the specific question of independence for Scotland, that is, being pro- or anti-independence, we support the right of the people of Scotland to determine that future through a constitutional referendum’.

The relevance of the STUC and unions in Scotland to this process and eventual outcome should be obvious. As still the largest voluntary membership organisations in Scotland and representing the organised working classes, the STUC and its affiliates have played a leading role in helping establish and sustain the Constitutional Convention of the 1980s and 1990s. And as the debate will show at the STUC congress in April in Perth, this will be the case again. But exactly how remains unclear at this point. One suggestion is for the union movement to have its own constitutional convention. Another is that the STUC makes sure the new convention to be set up by the Scottish Government goes much wider than just having its membership composed of elected politicians so that it would include civic society organisations (like the one in the 1980s and 1990s). In many ways, this is to re-assert and re-apply The Claim of Right to a situation some forty years later.

The Scottish Left Review and the Jimmy Reid Foundation will be part of this overall process by providing much needed balanced and informed materials in this on-going constitutional debate. The first examples of this will be the hosting on a fringe event at the 2020 annual congress of the STUC (see advert on p23). The second will be the publication of an educational pamphlet by Professor James Mitchell of the University of Edinburgh assessing each of the constitutional options for Scotland. In the pamphlet, for example, to the supporters of independence, the searching questions of independence ‘from what and whom?’ and independence ‘for what and whom?’ will be starkly posed. And, this will be on top of the continuation of publishing articles in each and every issue of Scottish Left Review by leading voices from different parts of the left. In this issue, we have Stephen Smellie, Kenny MacAskill, Jim Sillars and Alex Rowley.

After we have gone to press, two events will have happened that will have a great bearing on these matters. First, the Alex Salmond trial. Whatever the outcome and with the political stakes so high, it is inconceivable that the SNP and Scottish Government will not be hugely affected. And, all this with the next Scottish Parliament elections just over a year away – and ones that some say could represent the mandate for independence.

Second, the Labour leadership elections. The prospect of Corbynism without Corbyn is manifest most obviously because Keir Starmer is very much ahead (and because Rebecca Long Bailey is not as leftwing as Corbyn on a number of issues like Palestine or nuclear weapons). This could mean that Labour becomes more electable but the prospect of a British ‘road to socialism’ will have retreated into the far distance. In Scotland, it looks as though going into the Scottish Parliament elections next year, Richard Leonard will have right-winger, Jackie Bailey, as his deputy. Recall he sacked her for undermining his leadership in 2018. Not exactly the dream ticket and a reminder of how difficult it will be for Scottish Labour to have and prosecute a radical platform in those elections. But underlying Labour’s woes north and south of the border is the issue that changing leaders is not synonymous with addressing a set of more systemic and structural problems that the party has (over membership activism, dysfunctional staffing, over-reliance on a parliamentary focus, a low level of industrial class struggle and so on).

Put all this together and it’s not exactly clear what the significance of the first polls since 2014 showing relatively consistent (but slight) majority support for independence is … which brings us back to this, our ‘STUC’ issue. We asked the union affiliates of the Jimmy Reid Foundation to tell us what they are doing – and will be doing – to ‘take back control’ from hostile employers and governments on the industrial and political fronts. So, we hear from the UNISON, UNITE, EIS, Usdaw, PCS, FBU, UCU, RMT and POA unions, where their concerns are not just jobs, pay and pensions but also the right to strike and under what constitutional arrangements progressive politics can best be advanced.

Time for transformation is now – we must fix our broken constitution