We have lost sight of what the bankers did and we will all pay the price There are certain times throughout history when real press freedom emerges and the fundamental questions about our social and economic system are asked. These opportunities are gone in an instant, closing as quickly as they are opened up. A golden moment of press freedom emerged in late 2008 and early 2009. The reason? The global economy coming to the brink of meltdown and the most severe economic downturn since 1929. $2 trillion were written off of bank’s balance sheets, it required $12 trillion of global bailouts (£1.2 trillion in the UK with state owned banks continuing to make losses) to stabilise the system. The world economy lost 2 per cent of GDP and the UK economy contracted by over four per cent alone.

For a brief moment questions were asked about our economic and political system; New Labour was pronounced dead, neoliberalism was pronounced dead. The article that will always stick in my mind was in The Guardian in April 2009, Eric Hobsbawm asked “Socialism has failed. Now capitalism is bankrupt. So what comes next?” These dangerously important questions can never remain in the public domain for too long. They didn’t, and on the 8 May the Daily Telegraph began publishing details of MPs expenses, these revelations took the pressure off the bankers and the left became demoralised; duck ponds replaced derivatives as the story of choice.

So what did actually happen back in 2008? Are bankers the real villains? The link between excessive pay and the economic crisis is now widely acknowledged. According to the Treasury Select Committee – Ninth Report: Banking Crisis: reforming corporate governance and pay in the City: “the ‘bonus culture’ in the City of London, particularly amongst those involved in trading activities in investment banks, contributed to excessive risk-taking and short-termism and thereby played a contributory role in the banking crisis.”

The massive short term pay incentives encouraged more money into more risky and secretive practices. On the eve of disaster, huge bonuses were still being handed out, they had no idea that they were single handedly about to bring down the entire system. The state bailout will probably lead to a generation of fiscal pain. The greed of the rich will directly hurt the poor through cut backs in public services and soaring unemployment. They are undoubtedly villains.

Major individuals who oversaw the meltdown have got away with it; Fred Goodwin, former Chief Executive of RBS who oversaw the collapse of the Royal Bank of Scotland walked away with a pension of over £300,000 per year. Andy Hornby formerly of failed bank HBOS is now CEO of Alliance Boots. Richard Burrows, governor of the Bank of Ireland has now taken up the chairman’s seat at British American Tobacco. American economist Paul Krugman summed it up perfectly, it’s a case of “heads they win, tails other people lose”. 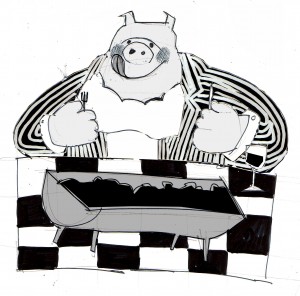 So why have they got away with it? The first reason is the state; the system has been underwritten by £1.2 Trillion of state guarantees. Leaving aside whether the bailout was necessary (I think it was) we now have a very dangerous situation of moral hazard. If financial institutions are too big to fail then there is no need to act responsibly because they know they will have to be bailed out. Now the bonuses have returned the government can only grumble from the sidelines. Rescuing the financial system without real reform has not protected us from future crises.

The government has also reinforced the old ways of doing business. Stephen Hester, Chief Executive of the publicly owned Royal Bank of Scotland has a total salary package of up to £9.6 million, not only is the government not curtailing excessive pay, they are encouraging it. Just as importantly perhaps, Stephen Hester’s pay is linked to share price; his mission is to boost the share price of RBS, then sell it back the private market, but isn’t this the sort of short-termism the governement should be discouraging? The depressingly predictable first reflex is always for privatisation, what about mutualisation, what about a UK state investment bank? This government has repeated the dogma that banks are better run in private hands and that huge salary packages are necessary to attract ‘talent’. Even a modest exploration of these practices or fresh thinking has been dismissed by the chancellor.

Secondly, the instability of the economic system caused by bankers is part of a wider unstable economic system; neoliberalism. If the state props up a pro-privatisation, deregulated, non-interventionist model of the economy it cannot tackle the banker’s excess. Ironically, the bankers heading up the casino capitalist model which has wrought so much destruction are saved because they are part of the fabric of that very model which this New Labour government has bought into.

The economic model is hugely prone to instability and crisis for several reasons. Since the 1980s the fruits of higher productivity have been increasingly siphoned off by the super rich. The share of GDP going to profits has continued to rise while at the same time there has been a decline in the share allocated to wages. The reduction of the relative share of labour in national income has lead to a reduction in aggregate demand. Profits and output were rising faster than wages so who was going to buy the output? Demand was kept up in the short term by increasing the supply of credit and keeping interests rates low, but this is not a sustainable economic model and is in no small part responsible for the economic crash.

The super rich, far from being the wealth creators in our economy, have had a hugely destabilising effect. In a document written by the Joseph Stiglitz entitled “The ways out of the crisis and the building of a more cohesive world”, he states unequivocally that “the crisis has structural roots. The aggregate demand deficiency preceded the financial crisis and was due to structural changes in income distribution. Since 1980, in most advanced countries the median wage has stagnated and inequalities have surged in favour of high incomes.” The alternative to a low wage, high debt economy is a more sustainable model of greater equality and higher median wages for all. For that to be achieved the trade unions must be allowed to grow stronger, the welfare state must be more generous, and the model of taxation must become more progressive. In short, the bankers have been allowed to get away with it because exploring the deeper causes of the economic crisis will open up a can of worms which many in government and in New Labour do not want to open.

Thirdly, there has been a lack of political action from the public at large. Post-crash the broad ‘Put People First’ coalition march for ‘Jobs Justice and Climate’ only mustered 35,000 people – compare that to the over one million who marched against the Iraq War. Outside activist circles and into the Party political processes the response has been muted. The Labour left has been drowned out by the right wing New Labour orthodoxy. The Green Party, Plaid Cymru and other left of centre fringe Parties have had more to say but their influence on the mainstream of politics is minimal. At the same time the public outrage around banking greed and excessive remuneration is palpable so why did this not translate?

One obvious observation is the lack of political activity from the grass roots. If one does not have experience of political activity, of organising, of protesting, of campaigning then however angry people may become they have no positive outlet for that anger. This suits the conservative elements in our society and 30 years of the market trampling over society has made ordinary people feel powerless.

Fourthly, we cannot ignore the role a non-proportional electoral system plays in Westminster politics. At Compass we galvanised support from politicians from the Lib Dems, Greens, Labour academics, writers, journalists, economists, bloggers, campaigners and trade unionists in our campaign for a ‘High Pay Commission’, it was a microcosm of the ‘progressive majority’ in Britain. Yet this progressive majority has no channel for its voice. This rotten electoral system maintains the centrist political orthodoxy because the major political parties have to focus their message on swing voters in marginal seats. The voice of the majority is constantly ignored – why are there still five million people in need of social housing after 12 years of a Labour government? The answer is that they are living in safe Labour constituencies.

It would be dishonest of me to pretend Compass has the perfect formula to curbing the banker’s excesses, we don’t. Our campaign is to establish a High Pay Commission to be the main body of research into the broader impact of high pay on the economy and society. We believe it should focus on three main things; how high pay and remuneration have affected economic stability, to explore the link between high pay and long term performance within companies and financial institutions and lastly, to explore the effects of high pay on society.

We realise this short term measure is no panacea, but transparency would be a welcome first step. To achieve the ‘good society’ nothing short of a wholesale replacement of the neoliberal economic model for a radical social democratic one is necessary. Yet what we are doing through our campaign for a High Pay Commission as set out in our ‘No Turning Back’ essay for the New Statesman does reveal many of the steps we believe we need to take to change society. If what we want is a more equal, sustainable, democratic and liberal Britain we can no longer go on trying to cope with the symptoms of market fundamentalism. It is time to address their causes. Yet the causes are entrenched through class and privilege and we have to work together to succeed. Isolated measures on the environment or inequality are not enough; single issues have to be joined up and given ideological direction. The progressive majority has not united in to take on the bankers and this is another reason we have failed.

What this means is the creation of a politics that transcends tribal party lines. The postwar settlement that delivered jobs, free health care, social insurance and decent education for all was built on the ideas of J M Keynes and William Beveridge (both Liberals) and Rab Butler (a Tory). Meaningful and lasting change happens only when people join in the widest possible movements. At every level we should strive to bring people into the political movements and to dare more democracy; in our public services, in our workplaces, in our communities, and most importantly of all, in electing our representatives.

We should never forget what the bankers did but reining in the masters of the universe means cutting off what allows them to thrive -a lack of democracy and an economic system that puts people before profit. Short term campaigns must be linked with longer term ideological guidance otherwise in ten years time we will be fighting different villains, and losing.