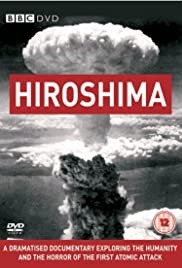 Premiered on British terrestrial television earlier this year, Hiroshima recounts and illuminates one of the most horrific war atrocities of the twentieth century. Beloved actor, the late John Hurt narrates in passionate detail; his rich, authoritative tones conveying absolute depth of commitment to describing and explaining details and facts about events before, during and after the USA dropped a four-ton atomic bomb upon Hiroshima on 6 August 1945.

Seventy-five years after Hiroshima and Nagasaki began their almost impossible recovery from the deadly radioactive devastation wrought upon them during the closing stages of WW2, Hiroshima delivers powerfully clear reminders of how bad things can get when humans decide to stop at nothing to control and win the spoils of war. Fifteen years after its release, the stunning relevance and command of this documentary have not diminished. Its wealth of hindsight delivers unforgettable memories.

In freshly witnessing images and memories conveyed by this film, we rediscover and discover both forgotten and never before recounted, heard or seen emotions and facts about the inconceivable horror which befell Hiroshima in 1945. Through juxtaposing these revelations in stark, glaring contrast to news archive images of jubilations around the western world as a result of the announcement that these horrific events effectively ended WW2, we also come to fully understand how tragically hollow those celebrations were in retrospect.

Through expertly combining dramatised, re-enacted and real, archive footage, Wilmhurst throws light upon all perspectives of this profoundly catastrophic tragedy of war. For instance, through intercutting real and dramatised footage of President Truman aboard the presidential yacht, taking charge in war rooms and attending political meetings with Churchill and Stalin, Wilmhurst conveys an acutely tangible sense of how terrifyingly quickly war leaders came to the ‘momentous’ decision to drop the A-bomb.

The last living person present during discussions in the White House map room, duty officer George Elsey, gives an honest interview about ‘top secret’ meetings. Paul Tibbets, commanding officer and pilot on the host warplane, Enola Gay, and his logistics colleague, ‘Dutch’ Van Kirk, are given space to talk openly. Weapon test officer, Morris ‘Dick’ Jeppson talks of realising that he was the last person to put his hands on the nuclear bomb they dropped. Tibbets talks in ordinary-seeming tones about how he named Enola Gay after his mother, so that history would remember her.

John Hurt’s gripping voiceover accurately describes the minutely exacting, nerve-wracking procedures involved in dropping the bomb. Hurt’s incredible tones add even more gravitas to the film’s telling of the unfolding nightmare of events on the ground in Hiroshima before, during and after the bomb landed.

One of the few survivors of the blast, Dr Hida recalls that in 1945, all Japanese civilians, including schoolchildren, were drilled in taking up arms against the American enemy. He reveals that during those war years, he taught medics to become suicide bombers. Other blast survivors equally describe their personal experiences with awe-inspiring power and overwhelming depth of detail. Some, such as then bank teller, Akiko Takakura, explore reasons why they were targeted by the USA as an experiment to measure the effects of the bomb. From their direct experiences, we learn about radioactive fallout – black rain – being swallowed by burned victims, desperate for water; about hollowed out people who were evaporated or instantly roasted to the bone; about beyond heartbreaking journeys to find signs of humanity amongst the devastation.

This astounding documentary more than successfully showcases why and how Japan’s civilian population was targeted by USA military. It also gives an entirely human perspective on Hiroshima’s staggering readjustment, to become the thriving, democratic, pacifist city that exists today. Japan’s current economic successes and its fight to remain independent from China may influence the way that audiences who watched this film now respond to it. So too may their awareness of the fact that in 1945, the country was governed by imperial dictators.

Enormously profound changes which shaped Japanese society and politics between those years arc across the unimaginable yet real impressions we can acquire through watching Wilmhurst’s outstanding documentary at any time. Moving, traumatising, deeply absorbing and enlightening, its storytelling thoroughness honours and respects its subject matter to the nth degree. As harrowing as the effects of seeing this film will be upon all who view it, the importance and weight of its anti-war message is one from which no moral being should shy away.