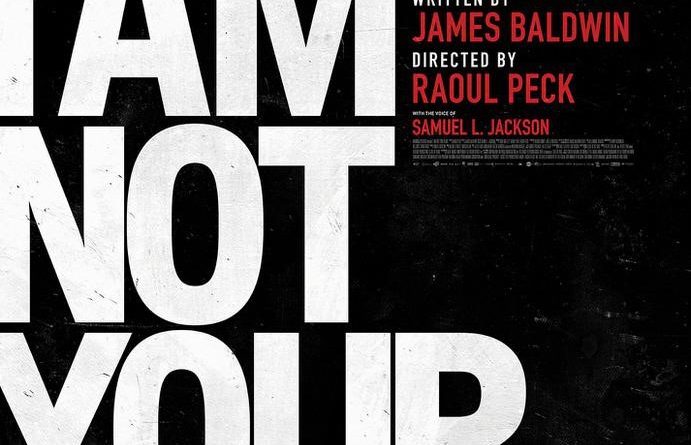 Documentary director, Raoul Peck, strikes a supremely eloquent political and cultural chord with I Am Not Your Negro. Based upon James Baldwin’s book, Remember This House, this award-winning film is deeply enriching. Featuring extracts from the author’s interviews, oratories and lectures, his philosophy is also conveyed through narrative voiceover by Samuel L. Jackson. The actor’s enigmatic tones steer us steadily through the film’s fullness of detail and complex imagery without losing a beat.

Badwin’s beliefs in the ability of hope, language and media to create a better world are consistent themes which punctuate his powerful, insightful dialogues on the meaning of being black in America. In his book, he categorised his philosophy under three themes: heroes, witness and purity. To exemplify these themes, Peck has deftly selected relevant photographs and film images from the past century. No punches are pulled about their collective relevance to past and present day attitudes to racial segregation and prejudice.

The narrative of how and why the talents of glamorous movie actors and stars, including such as Sidney Poitier, Harry Belafonte and Lena Horne, changed mass attitudes to black people is frequently juxtaposed with shocking journalistic images of police violence upon both ordinary and extraordinary blacks living in white societies. Some of the first journalistic images we see are of black policemen joining their white colleagues in beating up black protesters in Birmingham, Alabama. Peck, therefore, commands that his audiences see and understand the fullest possible picture. His techniques work – his film is completely absorbing.

Iconic political and cinematic figures and non-famous, quiet protesters are brought to light as noble, human emblems of both hope and sorrow. Lost – now found – black and white photos of schoolchildren proudly holding up signs stating that they were against going to school with Negroes reflect how the offensiveness of the other n-word, which Baldwin chooses to use to make points, became replaced by other kinds of gross tyranny. I Am Not Your Negro uses many such journalistic photographs to echo his oratory genius in conveying how and why the legal abolition of slavery in the nineteenth century under President Lincoln and the consequent end of apartheid in America held somewhat shallow significance. Language and hope as ideas are, thus, also exposed as being tough yet fragile, useable yet abuse-able, depending upon who wields and beholds their power.

We witness Baldwin exploring an interesting point in one interview about Bobby Kennedy’s public statement on TV – also screened in the film – that he saw no reason why there should not one day be a black American President. The point he makes is that Kennedy’s words barely concealed the premise that blacks were relatively more badly behaved and regressed than whites. The author himself concluded in discussing this type of concept that ‘the black population has not succumbed to raging paranoia’ despite white expectations. One wonders how he could or would make a similar pronouncement today.

Peck successfully shares his understanding with us of the reasons why many enlightened people of any colour openly admired and invested in FBI-blacklisted Baldwin’s intellect. These people who valued the author’s views during his lifetime ensured that they were not suppressed, either by others’ differing opinions and contradictions or by the existential fear which he shared with friends such as Malcolm Luther King, Malcolm X and Medger Evans. Often resonating with deep grief and quiet rage which feels real yet never spills messily upon Jackson’s calm voiceovers, Baldwin’s communications and presence frequently illuminate points about feelings towards and media portrayals of his black and white brothers and sisters. This film especially highlights why, as a highly educated and well-connected insider, he was loved and respected within many influential quarters of society.

Compelling and edited to perfection, I Am Not Your Negro to some extent relates a familiar story of what it took for blacks around the world to keep standing up for their civil and human rights. The difference that this film brings is Baldwin’s perspective on why and how this struggle managed to turn more than a few corners since the imposition of slavery.

Whether the world has changed enough, could be changed more or has enough positive energy behind it to sustain lasting impact through future generations facing these issues may not yet be certain. To honour James Baldwin in recognising the professed power of whiteness over blackness is one of many strong reasons for watching this superior film.