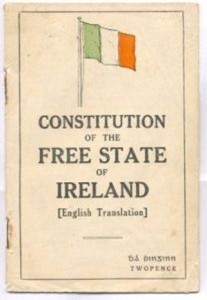 When, on the 24 April, Easter Sunday 1916 on Sackville Street, Dublin, a group of rebels seized the General Post Office, proclaiming an Irish Republic, one of the most prominent of the rebels was the great socialist James Connolly. Their belief in independence enjoyed relatively little public support, but the ruthless treatment of the rebellion, and in particular the rebels, turned public opinion. Just over two and a half years later, the party of independence, Sinn Féin, won a landslide victory in the December 1918 election.

The new majority party of nationalism refused to sit in the Westminster Parliament, and instead convened the first Dáil Éireann with 73 of the 105 parliamentarians elected. They declared independence, ratifying the 1916 proclamation. The British response triggered the Irish War of Independence leading eventually to the partition of Ireland, and – over the next 30 years – the creation of the Irish Republic. But despite the prominent position of the left at the GPO, the politics of Ireland has been dominated by the right since the 1920s. This is because the Easter Rising, like the composition of the independence movement was an alliance of the left and the institutionally much more powerful Catholic nationalists. When faced with British violence and unionist intransigence, this meant the leftist character of Irish independence was marginalised by the power of the Church and its supporters.

Ireland was Britain’s first colony, and the independence movement in Ireland inspired anti-imperialist movements throughout the twentieth century. The revolutionary rupture of 1916 was a combination of what we would recognise as left forces and romantic nationalists. The most notable figure on the left was Connolly – one of the most significant figures of the early twentieth century left – and other significant figures included Jack White. But the left’s vision of Ireland was very distinct from that of the romantic, Catholic nationalists such as Pádraig Pearce. The confrontation with the British state led to an almost complete victory for Catholic nationalists, which has left modern Ireland by turns a clerical state and a beacon for neo-liberalism through the Celtic Tiger.

Connolly is reputed to have told his wife before his execution: ‘They’ll never understand why I’m here’ which reflects the ambivalence he expected from the international left. Was Connolly painting nationalism red? The outcome of the Irish revolution certainly suggests that he was, but the reasons why are not clear. Here, I examine the history and politics of the Irish revolution and try to draw out reasons for the failure of the left.

The ‘Irish Question’ dominated British politics in the late 19th century. The movement for Home Rule created the third-largest block of MPs at Westminster. The ‘Question’ dates back to the Anglo-Norman invasion of Ireland in 1169. It encompasses a period of settler colonialism during the Plantation, where Scots and English planters were granted land – largely in Ulster. And it came to a head with the 1798 United Irishmen uprising. Following this rebellion, the Kingdom of Ireland came to an end and the Crown was assimilated into the unitary monarchy that included the English and Scottish crowns.

The United Irishmen were a broadly progressive force, similar in character to the bourgeois revolutionaries of France and America. They sought to unite the Catholic Irish with dissenters (who were largely of Scots descent) to overthrow the Anglican ascendancy. The rising failed to overthrow the government, but Anglican ascendancy ended. It was replaced by full integration of Ireland into the British parliamentary system through the 1801 Act of Union. The Orange Order, emerging from militia who were engaged in anti-Catholic activity in County Armagh in the late 18th century came to consolidate a Catholic-Protestant division, especially in Ulster. This replaced the division between Anglicans, on the one hand, and Catholics and Presbyterians on the other.

This led to opposition in the predominantly Protestant north of Ireland to Irish independence. Following the potato famine, in which a million Irish died in the late 1840s, the movement for Irish ‘home rule’ gained substantial support. Home rule for Ireland came to dominate British politics through the last two decades of the nineteenth century. In 1914, a Home Rule Bill was finally passed at the third attempt but was suspended after the outbreak of WW1. The leader of the Irish Nationalist Party, which had argued for Home Rule supported the War and recommended that supporters should enlist to fight for the British Empire in order to increase support for Home Rule in London.

The Easter Rising ended in abject failure – put down within a week and with the main figures quickly executed by the British. But those executions channeled growing ill-feeling about the British conduct of WW1 and deeper distrust of British imperial power. Quickly the mood changed, and Irish independence became the favoured option of most Irish people. The Irish Nationalist Party was replaced by Sinn Fein at the first election after the rebellion.

The Proclamation of Independence was a progressive document. It contained a provision for ‘religious and civil liberty, equal rights and equal opportunities to all its citizens’, and commitments to universal suffrage and to ‘cherishing all the children of the nation equally’. The signatories were singled out for execution by the British.

That the revolution would lead to a conservative, clerical state was not inevitable. Many subsequent 20th century revolutions were led by the left, in coalition with nationalist forces, and the left-leaning leadership had to be removed by imperialists as happened with Patrice Lumumba in Congo and Thomas Sankara in Burkina Faso. Yet in Ireland there was no clear strategy by the British to eliminate the left leadership. The execution of the 1916 revolutionaries was rushed and had little strategic underpinning. So, while Connolly was executed, so were the more romantic nationalist and Catholic infused signatories of the Declaration of Independence.

Two key characters emerged from the Rebellion – Michael Collins and Éamon de Valera. Both were involved in the Easter Rising but escaped execution by the British. de Valera was deemed too insignificant, while Collins evaded the selection of prisoners for further interrogation and was instead taken for internment in Wales. Neither figure was of the left – de Valera’s future career indicated he was of the populist right.

The Irish War of Independence led to a stalemate, leading to negotiations led by Collins. This produced a ‘Treaty’ which has defined the party character of Irish politics ever since. The Treaty contained the proposed partition of Ireland, with two administrations. One was to be responsible for the majority Protestant north-east of the island. This became the Stormont government of the 6 counties that became known as Northern Ireland. The other government, based in Dublin has governed the other 26 counties, known as the ‘Irish Free State’. The leader of the pro-treaty group, Collins, was assassinated by anti-Treaty forces but the Party supporting the Treaty, Cumann na nGaedheal, governed the ‘Free State’ for its first decade under W.T. Cosgrave. After lodging power, it merged with two other organisations to form Fine Gael. Cumann na nGaedheal favoured order and stability, and became the party of the landed and moneyed classes. This desire for order aligned with the desire of the British government, who still had forces in Ireland.

A number of Soviets were declared during the War of Independence, most notably in Limerick. Here, the Trades Council took over the town and acted as the government, going so far as to issue money. But when support for a general strike was refused by the Irish Labour Party and the Trade Union Congress, the Soviet came to an end. Other Soviets came into conflict with both pro and anti-treaty forces, but were eventually put down by the conservative forces who won the Irish Civil War. Learning from the revolutionary experiences in Russia and Germany conservative elements were able to out-manoeuvre the Soviets.

The Great Depression and the economic difficulties Ireland suffered through the 1920s resulted a desire for change. The party that defeated Cumann na nGaedheal was Fianna Fáil, led by Éamon de Valera. The difference was much less ideological and much more about the differing positions on the Treaty. Fianna Fáil, though, adopted a more conservative populist position, which led to them being in government for much of the mid-20th century.

The Spanish Civil War gives a reflection of the nature of Irish politics of the 1930. The leader of Cumann na nGaedheal’s Blueshirt paramilitary, Eoin O’Duffy raised a force to fight on the side of Franco – he later offered to do the same for Hitler. Meanwhile anti-treaty politician, Frank Ryan and his Connolly Column, fought for the Spanish Republic.

During the 1970s and 1980s, Fine Gael moved to the centre, becoming a classic Christian Democratic party. Fianna Fáil flirted with populist neo-liberalism, and ended up creating the ‘Celtic Tiger’ – an economy based on inward investment and high levels of inequality and runaway house price inflation. This was extremely susceptible to a cyclical downturn, and when this came in 2008 it produced a massive crash. The response by the Fianna Fáil-led government was to implement brutal austerity, which was continued by the Fine Gael led governments from 2011 onwards.

The only really remarkable character of the current Irish Fianna Fáil-Fine Gael government is that it is the first time the parties of the Civil War adversaries have governed together. The Irish left remains fractious and divided. While contemporary Sinn Fein holds many leftist positions, there are a significant number of TDs (members of Parliament) from more radical parties. The leftist critique of Sinn Fein is that it is often authoritarian, and the decision to campaign against carbon taxes in 2019 cost the party much progressive support. The Irish Labour Party did itself enormous damage in a coalition government with Fine Gael from 2011-2016. Before the 2011 election, Labour was a serious contender to be the largest party. Labour currently holds 7 of the 160 seats in Dáil Eireann.

The Irish left came to revolution perhaps too late – lacking the factor of surprise enjoyed by the Bolsheviks. The underdevelopment of most of what became the Free State meant the labour movement was weak, and when Soviets were declared there was insufficient support to transform these into revolutionary moments with a class character.

Ireland during the Celtic Tiger was a crucible of neo-liberal development. The internal contradictions of this neo-liberalism are subtly different to those of earlier eras. That creates a dynamic worthy of analysis. And the left’s success in driving change on issues like abortion rights and equal marriage shows there is considerable progressive potential. The decision by Fine Gael and Fianna Fáil to govern together is a sign of weakness – not a sign of strength. It opens the door to a Sinn Fein-led government at the next election, and the opportunity to resolve the questions of reunification and progressive change at once.

We may see the reconciliation of the pro and anti-treaty parties as the first stage in the development of class-based politics in Ireland. But a class-based politics that arises from an antagonism to neo-liberalism, which will tell us much about how radical politics in the 21st century will work out. And then maybe we will understand why Connolly was so central to the Irish fight for independence.