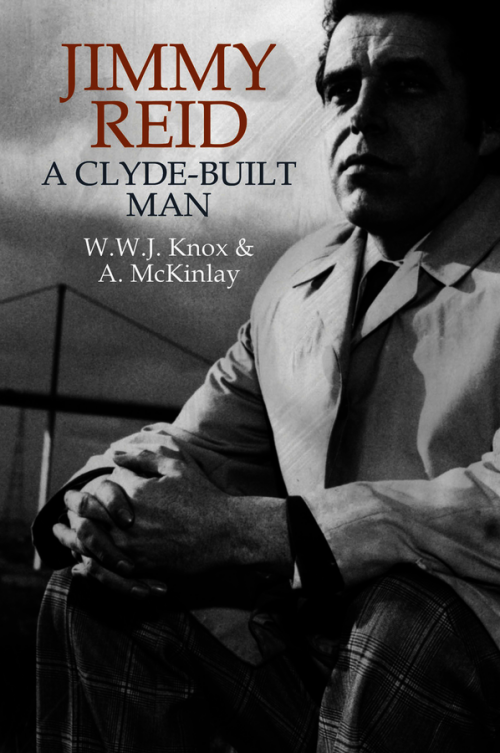 Academics Bill Knox and Alan McKinlay published their biography of Jimmy Reid called Jimmy Reid: A Clyde-built man (Liverpool University Press, 2019). It is the result of many year’s painstaking original work. On the occasion of its publication, Scottish Left Review interviewed both of the authors to ask them about why they choose to study Reid, what they found and what conclusions they drew.

Nearly 50 years after the high point of his political influence, that being the successful UCS work-in he helped lead, what is Jimmy Reid’s overall political significance?

His overall political significance is the continuing need to make well paid and meaningful work a requirement of the state and society and not just the responsibility of the individual. In a period of rising inequality, of low wages, of food banks, Jimmy’s fight against poverty is something that should inspire the current generation to emulate him and make poverty history. Because Jimmy not only experienced poverty first hand but he fought all his life to end it.

What made you want to study him?

There are personal and political reasons. Personally, as young men, we were inspired by the audacity of the UCS work-in and those that led it – not just Reid but also Jimmy Airlie. The defiance showed by workers against the supposedly unanswerable forces of the market gave a lead to many in the same position. Politically, it was the ability of the UCS stewards to turn what was a local dispute into a national one, and given the support from abroad, an international one as well. The progressive, outward looking perspective of Reid and his fellow stewards inspired us and the Scottish nation. The mobilisation of a cross-section of society, including Tories, was at once a lesson in building alliances, and a full-frontal attack on market forces, making a social or moral case that put community at the heart of economic planning. From another point. There was Jimmy’s presence as a player in all the main industrial and political struggles of the post Second World War decades. His life illuminates our understanding of forms of political and social change by showing how they were interpreted and negotiated by an individual.

What did you unearth about him that is not known or well known about him?

Jimmy started his working life not in a shipyard or engineering works but in a stockbroker’s office in Glasgow. He was the youngest transfer clerk in the Glasgow Stock Exchange. Coming from a macho culture of hard men in the shipyards, it was rather surprising that Jimmy was a tremendous enthusiast for the novels of Jane Austen – chronicler of the loves and lives of the south-east squirearchy. Also, as a prominent supporter of the Scottish national football team and a man from an impoverished background, it was an eyeopener to find that one of his great sporting loves was English cricket!

Can you briefly explain the key political transitions in his life from Communist to Labour to the SNP?

To be a communist involved completely immersing one’s self in a political culture whose ties went way beyond the factory floor or the conference hall. However, after UCS and his failure to get elected to Westminster in the 1974 general election, his doubts about continuing this membership began to surface and led him to leave in 1976. This was not an easy decision as to relinquish your party card was much more than a political act: it was to become an apostate, a break with friends – it was a ‘gut- wrenching moment’. As a Labour Party member, he identified with the centre-left group attached to Tribune and became a close ally of Neil Kinnock in his struggles with the miners’ strike and Trotskyists. However, it became clear that as Labour began to take a softer approach to the distribution of income and wealth under the leadership of Blair and Brown, he began to distance himself from what became known as the ‘new’ Labour project. Indeed, he became one of its fiercest critics as his Herald columns attest to. He also attacked the control freakery of ‘new’ Labour and the ways that dissent was crushed in the party. For him, there was little difference between Blair and Thatcher. The growing disillusionment with Labour led Jimmy towards the SNP. With justification he could claim that he had always supported the demand for Home Rule for Scotland stopping short of calling for independence. The progressive left influenced such policies and the civic nationalism of the party appealed to Jimmy and in 2005 he joined them.

What do you think he would have made of Corbynism, Brexit and the rise of right-wing populism – would he have returned to Labour or kept supporting the SNP?

There are many things Jimmy would have found attractive in Corbynism. Firstly, the determination to reduce inequalities – taxing the rich to feed the poor. Secondly, the democratic procedures of the re-selection process. Finally, as a passionate supporter of green incentives, the Labour Party action on climate change would have been welcome. Jimmy had always argued that union officials, MPs and government ministers were not there for life and that they had to be open to re-selection particularly if they failed to represent their members or constituents. But what he would have opposed was the creation of a leadership cult, something which could also apply to those leading Brexit – that is, Farage and Johnson. He was like many on the left in Britain hostile to the European Economic Community (EEC) which was renamed the European Union (EU) because he saw it as a rich men’s club. Yet as a result of serving on a committee which led to the declaration of human rights in the 1970s, he would have – we think – favoured to ‘remain’. We don’t think he would have rejoined Labour as he had become convinced of the need of Scotland to go its own way as the best solution to the country’s economic and social problems.

Does Jimmy just represent a moment in past history or does he have a continuing contemporary relevance for left activists today?

If anything, Jimmy represented for most of his political life an affirmative morality in politics – there was no titles, no sir, no lord, but there was a determination to bestow the riches generated by working-class blood, sweat and tears, to all those in the community, particularly the vulnerable. If his life was a message, then it would be for morality rather economics to be the bedrock of political thinking and policy-making. He made the social case for the right to work, that community comes first, that when industries are destroyed then lives are also destroyed. The young today are concerned about inequality, about climate change and so on. In Jimmy, they would find the inspiration that battles can be won.

You end the book with a tribute to the Jimmy Reid Foundation as being the continuation of Jimmy’s radical political thinking. Could you expand on that a little?

One of the criticisms that is made of the left for some time is level of sectarianism, the constant bickering and arguing over points of political dogma. The Jimmy Reid Foundation was set up not only to honour the memory of Jimmy Reid but also to campaign for radical changes in society. It exists to provide spaces for people to think and argue on a non-sectarian basis. Jimmy Reid was a mobiliser, an advocate of cross-cooperation across the political divides, and the Jimmy Reid Foundation carries on this work. As you say, the final paragraph of the biography reads:

• For those wishing to purchase the biography, please find the enclosed flyer with details of how to order with a discount. Alternatively go to https://www.liverpooluniversitypress.co.uk/books/id/51544/
• The Jimmy Red Foundation wishes to thank UNITE Scotland for hosting a launch of the biography at its Glasgow offices on 25 October 2019 at which UNITE’s general secretary, Len McCluskey was a speaker alongside the two authors.