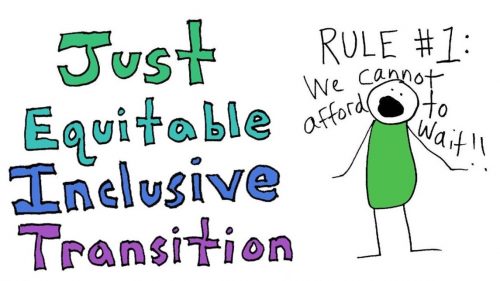 At STUC’s most recent annual congress, a number of resolutions were discussed which showed that energy and climate change policy are of enormous industrial and political significance to unions. A General Council statement committed the STUC to a body of work around energy and climate change – continuing our influencing work around the Scottish Government’s Just Transition Commission, looking further at energy policy, and considering how workers’ pensions might help address societal challenges such as climate change. This work is recognition that there are costs in failing to address climate change and costs in approaching a transition without justice at its heart.

Primary among this is a deepening environmental catastrophe and the subsequent impact on people around the world. The World Health Organisation estimates that by 2030, climate change will cause 250,000 additional deaths per year, due to malnutrition, malaria, diarrhoea and heat stress. The majority of those deaths will be in the global south rather than on these shores.

Climate change is already impacting disproportionately on people of colour, women, and those with the least capacity to respond to natural hazards, such as droughts, landslides, floods and hurricanes. Climate change is, therefore, an issue of race, gender and class.

The cost could also be the rise of the far right. The irony that climate change caused by the rich in the Global North is now causing thousands of environmental migrants and refugees in the Global South will not prevent the far right stirring up racist sentiment against migrants for their own ends.

There are also huge risks in the current market-dominated approach to climate transition. Trump was quick to try to connect with the Gilets Jaunes, tweeting that the French had come around to his scepticism about the Paris climate change agreement and the cost of fighting global warming. The Gilets Jaunes are much more than a bunch of fuel protestors, with their demands reflecting much wider and deeper economic and social issues. Were they simply fuel protestors, Macron’s decision to scrap the tax on fuel would have seen the disintegration of the movement. Having said this, it is clear that Macron’s fuel tax rise, at the same time as he cut taxes for the rich, was undoubtedly a trigger for their protests.

As Naomi Klein stated: ‘neoliberal climate action passes on the costs to working people, offers them no better jobs or services and lets big polluters off the hook. People see it as a class war, because it is’. Efforts to reduce emissions by passing the costs of the transition onto the working class risk being a major source of dislocation between the elite centre of politics and citizens and workers, unless accompanied by fundamental social and economic transformation. The Gilets Jaunes, therefore, highlight the potential for an increasingly complicated and intertwined relationship between the political and environmental crises we currently face.

It should be clear from events in France that radical social and economic change, union and community organising, democratic ownership, and massive government intervention are all essential companions in the transition to a low carbon economy. Similar lessons should also be learned from Scotland’s own experience.

No one should be unaware of the harm caused to workers and communities during the closure of coal mining and deindustrialisation in recent decades. Yet some policymakers and campaigners still point to Scotland’s progress in reducing emissions since 1990 as evidence that Scotland is transitioning to a low carbon future. While Scotland’s emissions have reduced significantly – by 49% since 1990 – it is also true that much of these emissions reductions have been offshored. Scotland’s emissions associated with consumption (emissions generated both at home and abroad in the production and transport of the goods and services that we consume) have only reduced by 8.6% between 1998 and 2014. We cannot bask in the pretence of reducing carbon emissions if those emissions have simply been decanted across the world as a by-product of deindustrialisation and globalisation.

The Scottish and British Governments’ complete lack of a coherent strategy for job creation in the low carbon economy has also meant we have failed to create good quality jobs in low carbon manufacturing. Scotland has one of the largest wind sectors but next to no manufacturing jobs in renewables. We have three BiFab yards in Scotland lying idle, developers who make their turbines abroad, and no political framework to ensure we capture value domestically. And we haven’t been able to capitalise on world-leading academic expertise in offshore wind, wave, tidal, and carbon capture and storage.

Over the last twenty years a number of Scottish Government documents, from parties of all stripes, have over-promised and under-delivered. For example, the 2010 Low Carbon Economic Strategy promised 60,000 new jobs by 2015. While data for low carbon jobs is poor and subject to a high degree of uncertainty, there is currently an estimated total of 49,000 direct and indirect low carbon jobs in Scotland, including a number in nuclear energy. Together, this represents less than 2% of jobs in Scotland.

Many of these jobs are less secure or unionised than traditional fossil-based jobs. A 2016 Strathclyde University study suggests that between 2004 and 2012 ‘employment in low carbon jobs in Scotland grew, but that this was more volatile than aggregate employment, and in particular that employment in this sector was particularly badly hit during the great recession’. A recent Guardian article highlighted a number of migrant workers building the £2.6bn Beatrice offshore windfarm were being paid less than the minimum wage.

There are clearly challenges for unions both in policy (ensuring that new jobs created aren’t simply left to private company profiteering or based on market incentives) and in organising (ensuring that unions adapt to a changing labour market and organise workers which aren’t simply centrally based as they were in the past). A key question in addressing both these challenges is the question of ownership.

The situation whereby one man, Jim Ratcliffe, owns a hugely important strategic energy asset accounting for 4% of Scottish GDP, and can threaten to up sticks and leave, is clearly not an acceptable state of affairs. Hopefully, Unite’s recent success in restoring collective bargaining arrangements might reign in the worst of Ratcliffe’s excesses.

The North Sea is also illustrative of a hyper-competitive model based on private company value extraction. Between 2014 and 2017, 160,000 jobs have been lost. At the same time, companies have sought to cut terms and conditions, lengthening shift rotas for offshore workers. Within the decommissioning sector, rigs are towed to beaches in South East Asia where they can be decommissioned without serious environmental regulations or workers’ rights.

Companies involved in renewables aren’t the flag-bearers for a more ethical form of capitalism either. Scottish Power is a wholly owned subsidiary of Spanish multi-national, Iberdrola. It recently announced plans to sell off its remaining coal and gas assets and go 100% renewable. While the move earned plaudits, it is entirely unclear how much capital spend of their investment in renewables will be in Scotland. Questions also remain over why it also sold off their hydro assets given the importance of these assets to the Scottish energy system. Similarly, while SSE earns plaudits for being an accredited living wage employer, it seems less concerned about fuel poverty – announcing a £76 fuel hike rise in the summer.

Relying on these multi-nationals, and an approach to public policy based on market mechanisms such as carbon taxes and levies on fuel bills, will not deliver either socially or environmentally. It will mean the poor pay far more than the rich as a proportion of their income and it will fail to ensure the scale and pace of change needed to address climate change. Few things illustrate this failure more than the rate of investment in low carbon energy in Britain fell in the last year. The private sector is simply not providing the long-term, patient capital required.

Tackling climate change while building an industrial base for low-carbon manufacturing will require government policy, planning, direction and investment. The Scottish Government’s Just Transition Commission, successfully advocated for by the Just Transition Partnership, provides an opportunity to address these issues. Its role is to look at how Scotland achieves a carbon-neutral economy while maximising opportunities in terms of fair work and tackling inequalities. To be effective, it should be independent of government and should have a commitment to look beyond the next two years, to climate change targets which run until 2050.

The Scottish National Investment Bank also provides an opportunity to leverage in funding for the low-carbon economy, providing patient capital for sectors and organisations which cannot access patient, strategic capital. The Scottish Government’s plans for a publicly owned energy company could also help transform the public policy landscape, although it will have to be far more ambitious than the Scottish Government’s current vision of a company focussed on retail supply. A focus on generation – where the both the money and the decarbonisation opportunities are – will be crucial if it is to play a role in a just transition to a low carbon economy.

Decarbonisation of heating of homes and businesses can be driven more effectively if gas supply was to be publicly-owned. Municipal energy companies which both reduce energy prices and promote clean, decarbonised generation can win significant share of the supply market. A publicly-owned offshore wind company could stimulate investment and capture some of the returns that will be made from our natural resource. Linked to the availability of finance on the right terms from the Scottish National Investment Bank, publicly owned energy companies can transform energy in Scotland.

Scotland’s unions are clear that tackling climate change is a moral, social and economic imperative and Scotland must play its part in reducing emissions. However, meeting targets must ensure that workers and communities benefit and manufacturing is not simply offshored. A genuinely just transition, addressing fundamental questions of ownership, is the only way in which we will move to a low carbon economy while building a more equal economy and society.