Laying out her step plan, Lesley Brennan says Jez achieved the impossible so why can’t Kez?

Corbyn won with a huge mandate by standing by his principles, offering mainstream Labour thinking, (which included re-distribution and public ownership) in clear contrast to both Tories and SNP. He recognises Labour cannot win in Scotland without change; and Labour cannot have a path back to power in 2020 that fails to speak to Scotland. Interestingly, a poll reported in the Guardian stated: ‘more than a third of people who voted for the SNP in the general election say they are more likely to vote for Labour now Jeremy is the l

eader’. This all sounds great but how does Scottish Labour fit in? 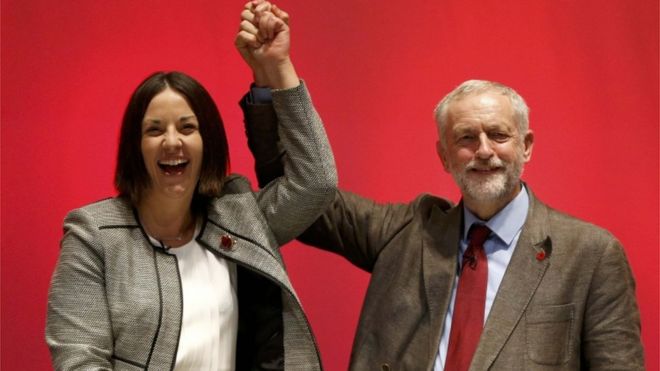 Scottish Labour is in a peculiar place following the defeats of 2010 and 2011, the referendum, the 2015 wipe-out, the lengthy and tetchy UK leadership campaign, and umpteen Scottish leadership contests. Thus, Kezia Dugdale has a colossal challenge of inspiring and leading party members whilst recognising that many are experiencing burn-out and becoming detached from the Scottish party.

Kezia working constructively with Jeremy can facilitate change in the Scottish party. Jeremy is an authentic leader, meaning that he is self-aware, genuine, confident, self-assured and is highly committed to his values. Kezia shares many of these attributes but can still learn from his leadership style. So here are my step-by-step prescriptions on how Kez, with a light touch of Jez, can achieve the almost impossible task of resuscitating the Scottish Labour Party.

Step 1 – the path to Scottish Labour’s current position has been long and winding so there needs to be realistic expectations for May 2016. It will take at least another five years to build a solid base before Scottish Labour can defeat the SNP at Holyrood.

Step 2 – many Scottish members, who were very active in Jeremy Corbyn’s leadership campaign, took very little interest in the last Scottish one even though we had been actively involved in previous one supporting Neil Findlay. I do feel members – me included – ought to overcome our own ambivalent attachment to Kezia.

Step 3 – Kezia ought to be given an opportunity to develop as an authentic leader assuming she addresses the fundamental problems within the Party, such as the fractures, the burnout, and, works to resolve these. Healing the party requires building resilience.

Step 4 – individuals and organisations that demonstrate commitment to their values through their behaviours are more resilient. Unfortunately, over recent years, the electorate and Party members have questioned the Labour Party’s values as it has not always acted in accordance with these. The ray of hope is Jeremy’s election, which demonstrates members and supporters want a Labour Party that is committed to its core values whilst aiming to win 2020.

Step 5 – Jeremy and his team understand the importance of building a broad consensus to deliver a decent society, which was demonstrated by the inclusion in his plan that ‘Labour must become the party of economic credibility AND economic justice’. Kezia must engage with members in a values clarification exercise in order to ensure that going forward the Party’s actions and priorities are in line with agreed values. These values will underpin our purpose including policy priorities and electoral goals. Having a clear sense of purpose similar to Corbyn’s plan will help motivate activists and win back voters.

Step 6 – autonomy encourages motivation but we need autonomy to strengthen our Party and Jeremy is supportive of this. Autonomy is critical for our survival especially over policy as it will strengthen our political position with respect to our opponents, and we may develop different policies on issues such as welfare and Trident from the UK Party. To ensure policy documents reflect the membership, increased democracy is needed.

Step 7 – Kezia, with Jeremy’s help, needs to heal a fractured party. A party that is divided will never succeed and to win a majority in 2020 and 2021. To increase Party unity, in addition to clarifying our values, concerns and comments need to be raised and heard, such as at conference and policy meetings. This will help strengthen our commitment to the Party.

With people feeling discontent with politics and looking for change, this has had some in Scotland become obsessed with where the powers lie. I believe Kezia can overcome this by tapping into Momentum, which consists of trade unionists, campaigners and activists, to strengthen our Party and the labour movement.

Lesley Brennan a Labour councillor in Dundee and contributor to the forthcoming third edition of ‘Is there a Scottish road to socialism?’.