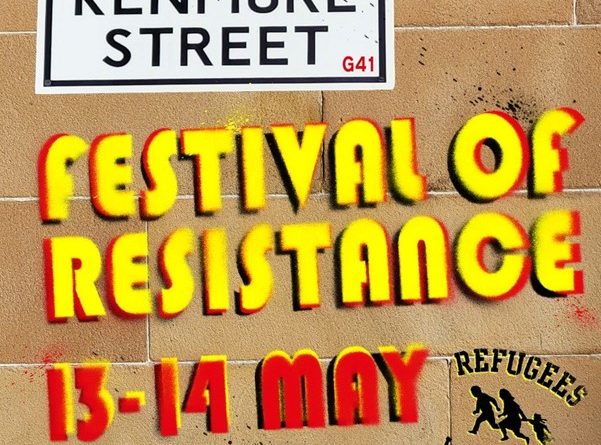 We reprint the speech Tabassum Niamat gave to open the first Festival of Resistance.

Good afternoon, everyone. I hope you are all enjoying the day so far. Today, we remind ourselves about what took place in Pollokshields a year ago. I look at this crowd and see those familiar faces that stood together shoulder to shoulder. I see my friends, my colleagues, the amazing community that is Pollokshields, my Bowling Green Family but most importantly I feel that solidarity that was ever so present that day.

Pollokshields has been my home for as far back as I can remember: I have felt the highs and lows of being in such a culturally rich neighborhood. The one thing that has remained constant is the unity because this community has always come out to defend their neighbors. It was the same when the Scottish Defense League thought they could come up to stir some tension; it was the same when the Home Office sneaked in thinking it was perfectly sound to snatch our neighbors Lakhvir Singh and Sumit Sehdev. We may not fully understand what the lives of our friends or our neighbors look like, but we do understand that our needs are no different to those who do not share our culture or race.

What kind of world is it that we want, living and working here in Pollokshields? I can tell you that almost everyone here has the desire to listen and understand. We celebrate our differences here and we try to learn from each other.

This Government and the media will have us all believe that we are so different and that the racist, hostile treatment towards migrants, refugees and asylum seekers is justified because their humanity and their dignity does not matter. They are not quite human enough. The recent Nationality and Borders Bill has further created a two-tier system of who belongs in this country because people like me, people like you who were born here are not British enough, so if the Government so chooses, it can strip us of our citizenship. This Government has pandered to the racists so much so that it is speaking the same language. No longer is it just the white supremacist screaming go back to your own country: now our government is saying the same.

So, if you imagine this is how they feel about us, what must their plans be for refugees and asylum seekers. Well, we know now. They want to send them to Rwanda with no hope of returning. Families will be torn apart. Lives will be destroyed. If this is their plan to save the taxpayer money because illegal immigration is taking its toll, well that is a bare faced lie. They are not being truthful with the real cost of sending people to Rwanda, and that is the crux of this policy. These are human beings, people like you and I who want the bare minimum from life which is safety, security, food in their belly and a roof over their head. It was never the refugee or asylum seeker that took billions from your taxes and wasted it on failed PPE. It wasn’t the refugee or migrant who caused the banking crisis. It wasn’t your Muslim neighbour who started wars that created refugees and asylum seekers in the first place. At every point this failed government tries to divert attention from their mismanagement and failure of running this country squarely on the shoulders of those who have very little power and sway.

I’m going to speak about the Bowling Green and what this incredible space means to me and those who come through our gates all the time. We have a simple message: everyone is welcome! Everyone who has ever come through those gates has left feeling hopeful and believing that another world is possible because we are creating that world. We listen, we try to understand and share what we have.

We leave all judgment to one side and going back to that fateful day last year. All our volunteers, friends and coworkers were there. I recognized faces from Govanhill, Pollokshields and those who I met during our many events. Today, we have so many of our partners and groups who have all helped in bringing this festival to life. They have all played a vital part and we all share the same core values that all humans are deserving of respect and dignity. We work together to bring communities together and there is no further testament to that then what we are seeing today. You are all an integral part to the story of Pollokshields. People make Glasgow but our people are paving the way for a new world, one which does not discriminate or hate. We all belong! That is the message here!

Postscript: The Kenmure Street 3 were all southside residents who were protesting on the day like everybody else. For some reason they were singled out. One of the arrested was a single mother who has the serious charge of assault looming over her when in fact she was left with two broken fingers when the police arrested her. The other two have the lesser charge of causing obstruction. There is an online petition that has started asking Police Scotland to drop the charges. We are all fully behind them and feel there was no need for the violent arrest since the day had gone by so peacefully.

Tabassum Niamat is the Project Manager for The Bowling Green (www.thebowlinggreen.org.uk). See our previous article on the Kenmure Street protest (July/August 2021) https://www.scottishleftreview.scot/fight-for-humane-immigration-continues/