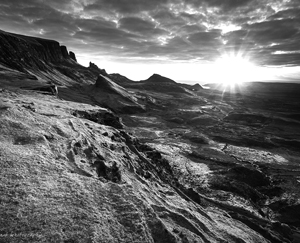 In any economy the use of land sits at the heart of its potential success. Who owns that land is central to how that land is used. In Scotland that places key decision making about social and economic development in the hands of very few people indeed. Scotland stands out within Europe as having the most anachronistic and concentrated land ownership patterns.

The point is well made by St Andrews University academic Charles Warren in the most recent edition of his book, Managing Scotland’s Environment. “Half of the entire country”, Warren writes, “is held by just 608 owners and a mere 18 owners hold 10 per cent of Scotland. Of Scotland’s private land, 30 per cent is held by 103 owners, each with 9,000 hectares [22,250 acres] or more, and 50 per cent by 343 owners. A minuscule 0.025 per cent of the population owns 67 per cent of the privately owned rural land. Thirty owners have more than 25,000 hectares [61,750 acres] each.’’

Ultimately land use is inextricably linked to who owns the land and what their personal preferences and economic objectives are, and this, in Scotland, is for the most part well beyond the influence of society locally or at large.

If the Common Weal is at root seeking to promote a future economy and society which has greater equality at its heart, then it cannot proceed very far unless it has land reform as central to its the agenda.

For many in Scotland the assumption is that the way land is owned and controlled is just the way things are everywhere, isn’t it? Few would automatically recognise that when it comes to land ownership not only are we very far removed from the norm, but what exists elsewhere is probably the result of actions taken a century or more ago by societies deliberately constructing greater equity, a wider sharing of the potential the land provides.

While the Scottish land ownership patterns have remained largely unchanged for generations, for many of those generations protected by the dominant landed interests in the House of Lords others, notably Ireland and Denmark, set out to change patterns of ownership. Jim Hunter, historian and land reform writer, pointed to Scotland’s lack of progress on these matters in a recently published paper observing on the progress, or rather the lack of it, on land reform in Scotland. He wrote;

“Scotland thus differs markedly from other European countries where, typically, the bulk of a country’s land is owned by very large numbers of people. This contrast does not go back indefinitely in time. In the eighteenth century, Scotland’s land ownership pattern (as concentrated then as now) was replicated in most European countries. In the course of the last 200 or more years, however, other countries have experienced land reforms which were intended to – and did – break up ownership patterns of the kind that Scotland alone continues to be stuck with.”

Land is of course is a finite and precious resource, and it needs to be made to provide for all our societal needs, for our homes, our food supply, our industrial space, our commercial and communal centres, our bio-diversity, our recreation and leisure, and for our energy. It is land which is, literally, the foundation on which our opportunities and potential for success are built. We have some devices at our disposal to influence land use, principally through our democratically controlled planning system. But ultimately land use is inextricably linked to who owns the land and what their personal preferences and economic objectives are, and this, in Scotland, is for the most part well beyond the influence of society locally or at large.

Free from the shackles of the House of Lords the new Scottish Parliament took some important steps down the land reform route when it enacted the Land Reform Act of 2003. The record will show that move was only seen as in any way contentious by the Conservative Party. The Land Reform Act was and remains important and it has helped shape a changing relationship between a number of communities and their (now former) landowners. The Act gives rights to rural communities across Scotland to purchase land when it comes on the market, and therein lies its central weakness. Change in land ownership depends upon a willing seller, even when a change of ownership would be in the community and wider public interest. Only in crofting communities in Scotland has an `absolute’ right to buy been granted by the Land Reform Act, but so complex is the law that exercising this right is very challenging. The possibility of that right being exercised, however, has already brought a number of landowners to the table to negotiate a handover of land to local communities.

Today, close to 500,000 acres of Scotland is under the control of local communities. Despite this welcome progress, it is modest by any standards and makes little impact on the total of Scotland under mutual control. That is why there are current moves to use existing powers to revisit the Land Reform Act to strengthen and extend community land purchase rights to urban as well as rural communities.

Advocates of the Common Weal point to the creation of a new economic framework which can provide for more mutuality, more local and democratic control of key assets, and which supports and drives economic transformations. In Scotland, when it comes to thinking about future land as a key national asset sitting at the heart of future potential, there is now experience of ownership and control which fits firmly within that vision of greater democratic and local control of tangible assets.

Community-owned land is owned by the democratic will of the people expressed in a ballot. That land is providing the basis for social and economic progress in those communities, and the use of that land is the stimulus for wider economic reform and local progress. After securing their land, some communities have moved to take control of their local energy needs; some are contributing to their economic futures by generating power for export, with the revenues, in part, being used to create local investment funds to help support future economic growth. Most community owners are providing land for new housing, or renovating housing to modern standards, or developing new housing themselves. Many are building work and community spaces, retailing and producing food, planting and harvesting trees, investing in the renovation of key local infrastructure, creating new agricultural and forest tenancies, all as a basis for more locally determined social and economic progress. Given the ownership model, it is the wider community that shares in all the benefits created, as profit is re-invested for future and sustainable economic opportunities.

All this new activity sits within a wider experience in Scotland which has also seen people empowered and acting for improvement. People working together, to take control of housing, or the supply of key services, or running local facilities through, for example, housing associations, community co-ops and development trusts of various shapes and sizes. These enterprises control tangible assets of some scale and value. Communities managing such enterprises, and those managing thousands of acres of land, are evidence that there are more accountable ways available to us right now of managing key assets that allow the development of economy and society. My experience is that there can be open scepticism that communities really can control and manage anything of scale, and beliefs that assert that these are matters best left to the traditional private sector and ownership models. The evidence increasingly exists to challenge those assertions.

It would be a mistake, however, to think that somehow community ownership is only about mutual and co-operative thinking. Within the framework of community-owned land many new businesses are developing, where individuals are being offered new opportunity to contribute to the greater social and economic good through their own private investment, helping create further employment, but also income to the community owner that is then turned into mutual benefit.

The early success of community ownership is just one manifestation of the need for more land reform, to allow more communities, rural and urban, to fashion a new future. There are many other ways to widen access to land and provide for its better utilisation, to create the right incentives for local economic growth. Urgently-needed reforms to tenant farming, issues with succession, the maintenance and creation of more common land are among them.

Scotland has a radical past in the struggle for access to and control of land. The only reason crofters in the Highlands and Islands attained any degree of protection was by direct struggle and the intervention of the state to create the opportunity of access to land and protection to stay on it, acting against the worst abuses of the private landlords. There is a noble tradition of the state intervening when necessary in land questions, and that is needed again now to widen opportunity. Any question of change in land ownership is bound to be controversial and opposed by the vested interests in private ownership. That is a given, but is not a reason to shy away from the need for further and radical reform in the interests of the common weal.