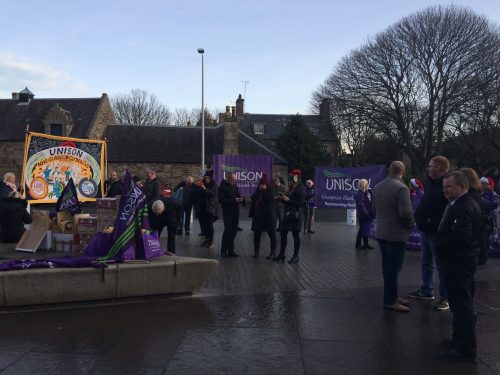 In Scotland, just as in the rest of the developed world, public services are facing a rising tide of demand which is driven by demographic changes, advancing medial science and new technologies, at a time of constrained resources.

In the devolution referendum of 1997, Scots voted not just to have their own parliament, but to have a parliament with tax-varying powers. The 20 January 2018 saw the first use of those powers. Basically, we’re talking about no more than a couple of quid a week, for the majority of Scots. Overall, the changes are going to raise roughly £420m – which is technically a lot of money, which could do a lot of good for local services. But it’s really a drop in the ocean when you consider the overall Scottish budget is in the region of £32bn.

With the lifting of the Council Tax freeze, councils are lining up to review and seek to raise their locally raised tax income. Borders Council, for example, on same day as historic Holyrood vote increased Council Tax by 3%. Its leader, Shona Haslam, said the budget would ‘improve the lives of Borderers’. A £4.8m specialist dementia residential facility and £2m towards reopening Reston station are also among the administration’s plans. Ms Haslam said the tax increase would be only the second in ten years during which time funding had reduced and demand for services had risen. The administration said it hoped to avoid any compulsory redundancies.

Surely then all this new money signals good times in our municipalities?? Think again. As inveterate UNISON Scotland blogger, Dave Watson put it: ‘In summary, the extra money is very welcome and makes a significant contribution to the draft budget shortfall. It also means that local government is suffering as badly, but not much worse (this year at least), as other departments outwith the protected spending areas. However, it still means an underfunded pay policy and service cuts’.

In UNISON barely a day goes by without another report on the impact of cuts on local services, as councils start the difficult process of managing yet another round of cash release efficiency savings ‘cuts’. Demonstrations are happening weekly outside town halls.

UNISON Scotland commissioned a new report from the Jimmy Reid Foundation called ‘The contribution local government makes to our communities and the local economy’. The report demonstrates that analyses of public procurement and economic impacts of different forms of public sector expenditure confirm that economic expansion could be generated more effectively and efficiently within a balanced budget through more creative and innovative approaches to social, community and economic development

Crucially, the report argues that effective and efficient delivery is dependent on suitably and fairly rewarded staff, especially as recovery from recession and supporting the most vulnerable relies on this workforce. To this end, it demonstrates that the UK Government-imposed 1% cap on public sector pay increases has distorted labour markets, is unfair on those delivering essential public services, and has impacted on the ability of public sector employers to retain and attract staff.

In addition to our political lobbying, UNISON puts forward a constructive and practical manifesto for national and local levels on how to combat damaging cuts to essential services, by refinancing bad loans, buying out costly PFI projects, and other innovative financial strategies. Given the context of continued constraint on public sector funding at a national level, UNISON Scotland members are telling us that a reduction in services are inevitable and unless there is a commitment by the government to fully fund local system there will be a detrimental effect to local communities. The Inverclyde UNISON Branch, over a weekend, distributed a 18 page well argued (alternative ‘business case’ ) submission, highlighting the impact of proposed cuts on the economy, communities, jobs and services, the components of the very fabric of the Inverclyde area which impact upon on every age group from pre-school to breakfast clubs and upwards.

Intelligent force of argument against austerity is being advanced by UNISON (and other unions) to those with influence and decision-makers across Scotland. Ultimately, the argument of force may be required to stop redundancies, poor pay and dilution of terms and conditions. UNISON Scotland is up for that fight, particularly as the austerity programme was a response to the banking crisis which unbalanced the British and Scottish economies. Behaviours of the banking industry have not changed.

Dedicated public servants trying to keep our communities and services going with less resources and fewer workers still demonstrate an ethos and work ethic for which Scotland should be grateful. But a pat on the back does not buy the milk (or the honey)! Local government workers and all public sector workers deserve a fair pay rise. UNISON members across the public sector are now calling time on the pay cap and are demanding a substantial pay rise. The time is now. April 1 2018 is judgment day and we need to turn the political rhetoric into action. Public sector workers pay income tax and council tax too.

Lilian Macer is the Convenor of UNISON Scotland.