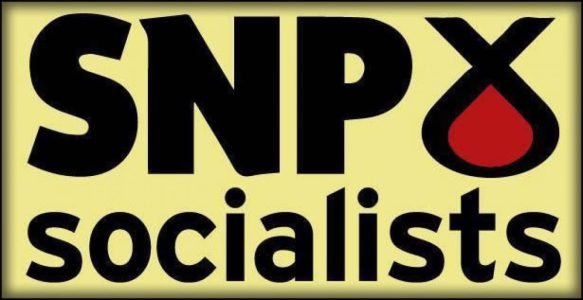 The SNP has always been known to be a broad kirk, taking in members from across the political spectrum united behind the cause of independence. A political revolution inspiring a massive growth of the SNP membership has made our broad kirk even broader.

Many members of the SNP identify as socialists and have done since the party’s formation in 1936. We naturally have our own views and interests, as do all members, and are seeking to form a unified voice to raise issues important to us and many other members within the party.

There are already several internal interest groups, each seeking to influence policy, including SNP Youth and Students, CND, Friends of Palestine, Out for Indy, and the Trade Union Group. Our membership is what makes our party: a tapestry of individuals and collectives each with their own viewpoints. We want to organise so that we can be a part of the internal and wider discourse and contribute to our diversity of voices.

During our recent inaugural meeting, a member asked if we would be seeking to mimic the ‘79 Group – a socialist internal group made up of SNP members such as Alex Salmond and Jim Sillars. A second internal group called the Campaign for Nationalism in Scotland was set up in response to the ‘79 Group which opposed the party appearing to adopt an ideology other than nationalism.

For many members, in particular our recent intake, independence is the gateway to a socialist Scotland. But our objectives are not to split the party. What had widespread agreement at our inaugural meeting was that we need to be a credible voice from within the SNP; to be a pragmatic, democratic and constructive collective to discuss and influence policy. We are not political purists.

We understand that the SNP is a social democratic party. However, that doesn’t mean to say that there is no common ground between socialism and social democracy or that they are necessarily antagonist to one another. We want to work together with all members. After all, we are in the SNP because we believe that it is the best party to deliver independence – the gateway to socialism in Scotland – and provide a competent and effective government that benefits Scotland and its people.

Our meeting was followed by depute hustings with self-proclaimed socialists, Tommy Sheppard MP and Councillor Chris McEleny, speaking, with Alyn Smith MEP and Angus Robertson MP speaking to members via video. The fact that two socialists are standing for leadership exemplifies the strong socialist voice already present in the SNP and the diversity of our membership. The depute leadership contest has been a lesson in democracy to the Tories and Labour representatives of the civil political culture that binds the party.

Naturally, discussion was a core part of our first meeting and will continue be at the centre of our agenda. We debated upcoming conference motions such as Chris Stephens MP’s motion for under 25s. Chris was present to speak on the UK Government’s exploitation of young workers. We also adopted our first motion on the re-nationalisation of Scotland’s public transport. As a hot issue at the moment with vast public support, we hope this policy will underpin our work for the future.

Another key aim will be to grow our membership. Since the independence referendum, the new uptake of members who have joined are more left wing than the general membership before. It was the message of self-empowerment, self-determination and hope for something better than the status quo that caused so many people to join. There is great potential for the growth of our movement.

Socialist values are at the heart of Scottish society and have especially deep roots in Red Clydeside. Nationalist heroes such as Burns – who in ‘a Man’s a Man’s’ wrote about a classless society and international brotherhood and cooperation – are not so different from socialist heroes such as Keir Hardie – a Lanarkshire-born trade unionist who lead the failed Ayrshire miners’ strike and attempted to organise a pacifist general strike at the start of World War One. Scottish nationalism and socialism are entwined. We want to be that voice within the SNP to stand for these ideals and do our part to take Scotland and the SNP forward to independence.