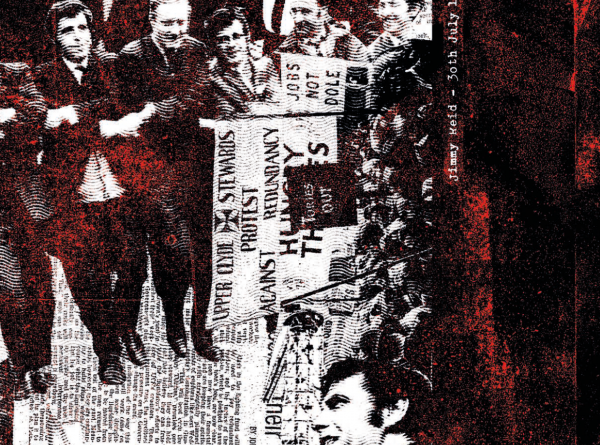 Given that the work-in started fifty years ago in June 1971, we are pleased to showcase the work of Derek McKechnie on the back cover (above).

Derek McKechnie explains why he created the UCS work-in image on the back cover. ‘My parents grew up during the 1970s in Glasgow to working class families and both their fathers worked on the shipyards. I think the UCS work-in directly had an effect on the people they became. Both became social workers, both joined unions, and both protested for the miners. And as their parents have influenced them, they have influenced me by imparting a desire for social justice and equality. This is why I chose to research the UCS for my honour’s year art degree at the Gray’s School of Art at Robert Gordon University. As it is 50 years since the work-in, it seemed appropriate to investigate a topic I have been aware of the majority of my life but have never fully understood. I was immediately intrigued and revered the power of solidarity of the workers, the support they generated and the impact the protest had on Scottish history. The legacy of UCS should never be forgotten’.

Our sister organisation, the Jimmy Reid Foundation (JRF), has held three successful online meetings on the work-in so far this year.

Some 250 attended the three meetings. The meetings are available to watch at:

iii) The struggle for decent work: UCS to BiFab – speakers: Mary Alexander and Bob MacGregor:
We are not rats – Jimmy Reid Foundation Event

In conjunction with UNITE Scotland, the JRF will also be publishing a pamphlet later this year called ‘What UCS means to me’. It will comprise a series of contributions from different people on what the work-in means to them. Among them will be the speakers at the above meetings.