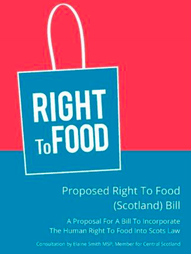 Elaine Smith outlines the progress on her bill to enact the right into law.

In Scottish Left Review (111, May/June 2019), I argued the Scottish Parliament emerged partially as a response to the rampant injustices inflicted upon Scotland during Thatcherism, and that it had not lived up to its potential as a left-leaning defence against cruel Tory policies. Improving access to healthy, nutritious food has been an area where parliamentary progress has been painfully slow and this is highlighted by the lack of progress of free-school meal (FSM) provision in the last 20 years.

The need for a radical and transformative approach to food has never been greater, yet the Scottish Government is prone to tinkering around the edges and resisting radical change. Many other countries, such as Cuba, guarantee all their children FSMs every day. Misplaced priorities and a lack of ambition are all that prevent us from following the same path in Scotland.

The Good Food Nation Bill was an opportunity to make meaningful progress in tackling the issues in our food system, yet the Scottish Government ignored the strong campaign for a right to food, and ruled out including the right to food as part of that Bill. It then announced that the whole bill had been shelved due to the pandemic – even though action to tackle poverty-related hunger has never been more needed.

While the issue of food insecurity has been brought much more sharply into focus by the pandemic, with some unable to leave their house or access supermarket delivery slots, thousands of jobs lost and many workers finding their income gone or reduced, the pre-Covid situation was already shameful. Food bank usage has surged with nearly 600,000 food parcels handed out in Scotland between April 2018-September 2019 and has significantly increased during the pandemic. Emergency food aid cannot be a permanent solution and it’s appalling that we need foodbanks at all.

My proposed Right to Food (Scotland) Bill seeks to enshrine the human right to food into law, giving effect to our international commitments in domestic legislation and ensuring that no one living in Scotland goes hungry. The issues we face are systemic. That is why my proposal takes a cross cutting approach, seeking to address the current disjointed approach to food by proposing the creation of an independent statutory body to oversee our food system, bringing together key stakeholders from across the food sector and the various government departments and authorities who have responsibility for aspects of food policy, and placing clear duties upon the Scottish Government.

The proposals have been supported by members of the public, unions, academics, local authorities, public health bodies, charities and community organisations. One of the main causes of rising food insecurity has been the rise in precarious work and wage stagnation resulting in increased in work-poverty. In responding to the Good Food Nation Bill consultation in 2019, the STUC called for legislation to incorporate everyone’s right to access healthy, nutritious and affordable food, and to place a duty on public bodies to contribute to the ‘Good Food Nation’ ambition. I’m pleased to have received STUC support for my Bill in order to realise those ambitions which appear to have been abandoned by the Scottish Government. UNISON Scotland has welcomed my Bill highlighting, in its consultation response, support for ‘Framework legislation (which) would enable the structural causes of hunger and malnutrition in a wealthy nation like Scotland to be addressed, such as low pay, race and sex inequality, and our inadequate benefits system’. UNITE Scotland, in its submission, emphasised ‘Scotland’s Food is everyone’s business. … [I]t is therefore important that the right to food should involve Government, public bodies, agencies, business and unions working together in drawing up policies’.

With this clear support, I will publish a final proposal and seek fellow MSPs’ backing to introduce a Bill. Due to the likely end of the parliamentary session in March 2021, it will not be possible to introduce the Bill this parliamentary session. Many of my fellow Scottish Labour MSPs are already actively campaigning on the right to food and reform of our food sector, and my decision to stand down from parliament means that one of them – probably, Rhoda Grant if re-elected – will seek to take this proposal forward in the next session.

As an MSP since 1999, I have promoted a socialist vision for Scotland and fought for a progressive society no longer plagued by the harsh inequalities. Securing a future free from hunger, through the legal guarantee of a right to food, and a government with the will to ensure that every individual and family has access to healthy, nutritious and sustainable food, will be key to ensuring that vision becomes reality.

Elaine Smith is the (Labour) MSP for Central Scotland.