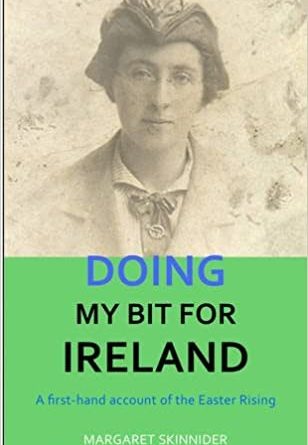 Maggie Chetty recalls the life of Skinnider and the work to keep her memory alive.

From the great political ferment of the first two decades of the twentieth century emerged a raft of revolutionaries across Europe. Within that ferment were the seeds of revolution in Scotland, Ireland, Russia, Germany and a catastrophic World War. The campaign for female suffrage in Britain saw the development of a core of brave women who came into struggle and were split, like the international progressive movement, by war. Those like Sylvia Pankhurst and Helen Crawfurd were against the war while Constance Markievicz, Margaret Skinnider and fellow Scot, James Connolly, saw the opportunity for Ireland’s long-awaited bid for revolution.

Born in 1892, Skinnider was a Glasgow schoolteacher of Irish heritage from Coatbridge who became an expert sniper and was deeply involved with the Cumann na mBan organisation for Irish women volunteers. She was called to Dublin at Christmas time 1915 by Markievicz who had heard of her exploits with the Anne Devlin Branch, and later returned in April 1916 to join the Easter Rising. Skinnider operated as a courier moving from the Royal College of Surgeons to the General Post Office with bullets from the English soldiers bouncing off the wooden frames of her bicycle wheels. She would come back, change into her volunteer uniform and go up to the rafters of the Royal College to be a sniper claiming to her commandant, Michael Mallin, that she had every right to fight as a soldier, quoting the Proclamation of the Provisional Government.

In a raid to attack English snipers, she was badly injured on her right side with four bullets in her side and back, the only woman to have been injured in the Rising. On recovering, she went to the USA on fund-raising tours for the families of imprisoned volunteers with her friend, Nora Connolly, James’s eldest daughter. While there, she wrote a promotional book, Doing My Bit For Ireland.

In the Civil War, she carried out training for the Cumann na mBan women and became Quartermaster General of the Irish Republican Army. She was one of many Republican women who were against the Treaty. In 1928 she was finally accepted back into teaching in Dublin. She fought for womens’ rights all her life. She became President of the Irish National Teachers’ Organisation and served on the executive of the Irish Congress of Trade Unions after she retired. When she died in 1971, she was given a full military funeral and was buried beside her friend and comrade Markievicz.

During 2016 along with Jim Lister and Stephen Wright of Fair Pley and writer, Cat Hepburn, we produced a three act play about Margaret’s life called Margaret Skinnider – Rebel Heart. The play was performed as a rehearsed reading around Glasgow and west of Scotland and headed the May Day celebrations at the Oran Mor, Glasgow with a sellout audience.

While we were grateful for the financial support of UNISON, Calton Books, Irish Government, Irish National Teachers’ Organisation and the support of a number of Irish cultural organisations, we were unable to raise enough funding to develop the piece into a full production. There was great interest in the play and many questions about why many young women of Scottish-Irish origin had grown up in Scotland without any knowledge of this amazing woman. I met an Irishwoman at a playreading at the Centre for Contemporary Arts, Glasgow on Easter Sunday 2016 – someone who had been taught by Skinnider.

The progressive movement in Scotland has had a rather uneasy relationship with Scottish-Irish politics and, prior to the Good Friday Agreement, there has been a process of self-censorship that has kept the discussion rather narrow. Brexit has changed the debate somewhat. It is also true that the number of young Irish people who have come to study or make their lives in Scotland has helped to bring about more of a sense of shared Celtic culture and a history that goes back to early medieval times.

The 1916 Rising Centenary Committee-Scotland have carried on promoting Irish history and culture since 2016. We launched a book called We Will Rise Again-Ireland, Scotland and the Easter Rising (2018); held an event to commemorate the setting up of the first Dail; organized an evening with Irish cultural organization, Conradh na Gaeilge, on Margaret Skinnider and a joint event with Glasgow Women’s Library to celebrate the life of Skinnider.

We are developing the play into a one woman play which we hope to take to the Edinburgh Fringe in 2021 and to other community venues including the St Patrick’s Festival. This is being developed with funding from UNISON and the Irish Government. So, we would be very pleased to receive further donations to this project, no matter how small. Skinnider was a formidable political activist, and trade unionist whose memory deserves to be celebrated among young activists today. Send donations to 1916 Rising Centenary Committee-Scotland; Account number 20364072/Bank sort code 608301.