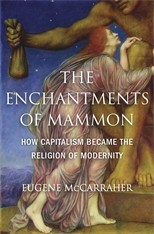 The Enchantments of Mammon is not so much a damming indictment of neo-liberalism – do we need another one when the truth is so ecologically obvious? – but of the religion-inspired cant that glossed it in the language of sanctitude.

Over the length of some 800 pages, Eugene McCarraher unpacks one overarching message: capitalism has hideously cloaked the enchantment of the world that pre-modernity, through sensual awareness, magic or prayer, made available to all. The Enlightenment heralded an age of reason, opening the way for unbounded calculations of profit; a development classically charted in The Protestant Ethic and the Spirit of Capitalism and hauntingly dissected in Dialectic of Enlightenment. McCarraher, building on these seminal foundations, catalogues the way capitalism has perverted our desire for what he calls ‘a sacramental way of being in the world’. Paradise, it seems, is all around and in us; we just need to be reborn into realizing this.

His story begins in seventeenth century England but the bulk of the book follows capitalism’s migration to the American continent. What follows is a tour de force in some ways but there is too much grist to the author’s mill in his reiteration of the way spiritual tropes informed the spread of corporations, business school management, Fordism and the eulogising of the free market.

What is said about socialism’s appeal in the first half of America’s twentieth century helps explain why Bernie Sanders can use the word without fearing accusations of ‘reds under the bed’ but the author is too keen to promote Christian sentiments as the beating heart of critical dissent (‘The socialist Jesus walked in workmen’s shoes’). His net is drawn too widely and material is sometimes selected to suit his own evangelical purpose. John Ruskin, albeit presciently aware of environmental degradation, receives more attention than Marx and the discussion of anarchism is restricted to Emma Goldman. Lucy Parsons is not mentioned and while Alexander Berkman is briefly touched on -his piety is not related to his awful prison experience and he is unfairly reduced to ‘a Franciscan girded with a pistol’.

The author has unearthed some good stories to tell but there is an irony to his claim that capitalism feeds off the same hopes and anxieties that were formerly entrusted to traditional religion. McCarraher, the proselytiser, offers his own theology as an antidote to neo-liberalism. ‘The grandeur of God’, he claims, can never be defeated and he calls for ‘repentance and renewal’. Some readers might find Extinction Rebellion more convincing as McCarraher seems to have misplaced our souls in a disenchanted world in his search for a new evangelicalism.

Sean Sheehan is author of ‘Žiżek: A Guide for the Perplexed’ (Continuum, 2012) and’ A Guide to Herodotus’ Histories’ (Bloomsbury, 2018)