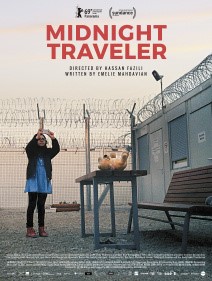 Increasingly soaring refugee numbers within recent years elicited a tranche of thematic documentaries by filmmakers moved to reveal some of the stories behind them. Midnight Traveller (2020) is a particularly personal, involved account which documents its filmmakers’ need to flee from their home in Tajikistan (after fleeing from Afghanistan 14 months earlier), in hope of reaching safety in Europe. Their precarious voyage was shot entirely using cellphones.

Taliban death threats against journalist, Hassan Fazili, in 2015 are revealed to be the spur behind his and his family’s necessary voyage. Their many failed asylum applications (in Afghanistan) following those threats intensified the urgency and necessity of their escape through consequently ‘illegal’ means. Hassan relates these government rejections to his past ownership of a cafe in Kabul, where staff and customers were not discouraged from openly voicing discontentment about oppressive Taliban rule and during a time when his documentaries were aired by Turkish broadcasters.

Midnight Traveller features a blend of joyous family imagery combined with spoken reflections which echo their individual suffering. Hassan’s quiet proclamations that they are embarking on ‘… a journey to the edge of hell’ sound in our ears from the earliest stages. He later painfully reflects upon happier footage filmed as ‘mirage’.

Despite knowing that the Taliban has put a bounty on his head, the composure and presence of mind which he maintains almost conceals the nightmarish quality of his family’s perilous and desperate circumstances. His film does not, however, shy from truths of raw emotions and shocking experiences encountered by himself, his wife Fatima and their young children, Nargis and Zahra.

We learn that, in search of ultimate safety, the family relied on vehicles afforded to them by both known and unknown helpers; on occasion, faceless smugglers who contact Hassan by cellphones to arrange next stages and routes; in one instance, smugglers who threaten to take his children if he does not pay the fee they demand. United in their resolve to reach safety by any means, the family perseveres together through these gruesome incidents.

During moments of reasonable calm, we come to recognise the articulate ease with which the family communicates; we observe the children’s carefree joy while playing in a rare Christmas snowfall; we understand when they complain about being bored; we glimpse moments of spontaneity, including a skilful dance routine by Nargis. Within cramped refugee camp conditions, cooking duties and food are shared with others; as if as usual, the adults tease each other about their attractiveness to the opposite sex and their abilities as filmmakers. A parasite infestation in one refugee camp bedroom is coolly dealt with.

An instance when the youngest child, Zahra, wanders away and cannot be found is vastly more alarming; when she eventually returns unharmed, Hassan’s impassioned voiceover clearly expresses how far from normality the context of refuge is for him and his family. Episodic fragments appear to shorten the family’s agonising 594-day timeline, while they traverse Afghanistan, Iran, Turkey, Bulgaria, Serbia and finally Hungary, where the film, but not their voyage, ends.

Whereas award-winning film For Sama (2019) documented a family’s heartbreaking existence within horrifying conditions of being terrorised through daily bombings wrought upon their home in Syria, Midnight Traveller similarly connects us to the numbness and relentless hopelessness of reaching for freedom from such unthinkable circumstances. Both films were released prior to the 2020 global lockdown; both portray peculiarities of inevitable-seeming norms which appear to have evolved amongst people fleeing from terror; meaningful within political narratives concerning human migration and exile.

In the Covid-19 spring and summer of 2020, science and politics joined in fortifying our planet’s boundaries for the evident protection of all. Post-crisis, people used to living in freer circumstances may think about the meaning of Hassan’s plight; some may think how to shape more equal societies.

One high-profile New York newspaper commented thus on Midnight Traveller: ‘When a nationalist protest breaks out near one refugee camp, you are bluntly reminded that behind the accounts of the migration crisis are concrete, real-world choices that those of us with homes make each day about the lives of others. In 2018, an estimated 70.8 million people were forced from their homes … over 50% younger than 18 years old.’

Talking about his successful career, Scottish actor, Brian Cox, recently stated that ‘… socialism is about suffrage and equality’. Midnight Traveller may heighten general awareness that such ideals could dispatch the need for freedom from merciless terror and gross oppression. Films like this educe profound reasons to be viewed and remembered.