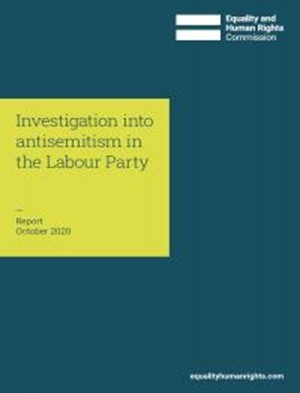 In October 2020, the Equality and Human Rights Commission (EHRC) published a report entitled ‘Investigation into Anti-semitism in the Labour Party’. Media coverage emphasised the ways in which the party appears in a bad light. In particular, the party was found by the investigators to have behaved ‘unlawfully’ in dealing with complaints of anti-semitism. However, a carefully reading of the report cast some serious doubts on the way in which the commission went about its investigation. Judgements about whether actions were or were not ‘unlawful’ might appear relatively straightforward. As someone without specialist legal training, I am loath to offer specific criticisms of that side of the report.

However, at the beginning of the section headed ‘unlawful acts’, I note that it specifies finding the use of ‘anti-semitic tropes’ and statements that claims of anti-semitism were ‘fake or smears’. There is no critical analysis of ‘tropes’, for example, on how to distinguish between anti-semitic ones and anti-Zionist ones. I find it astonishing that the writers implicitly assume that no one could conscientiously claim some complaints of anti-semitism are ill-founded and malicious. Someone whose claim the extent of anti-semitism is exaggerated is shown to be unfounded can only be labelled ‘antisemitic’ if there is other evidence of that person’s hostile behaviour towards Jewish people. Put another way, even if an individual’s argument that a particular claim of anti-semitism proves false, does that mean the person making that argument is anti-semitic? Further, on the issue of ‘unlawfulness’, I note that Jewish Voice for Labour, in a message posted on its website on 25 November 2020, states that its legal advisers have not yet completed its listing of the legal weaknesses of the report.

In any case, the report does not confine itself to judgements about legality. The report’s authors go beyond that and state that there is a ‘culture within the Party which, at best, did not do enough to prevent anti-semitism and at worst, could be seen to accept it’. These are not casual words I have chosen to emphasise. They appear both in the body of the report (p108) and in the Executive Summary (p6). To an ordinary member of the Labour Party such as myself, this is a horrifying claim. But is it justified? A careful reading of the report suggests not.

By referring to a ‘culture’ in the party, the report moves on from considering what is lawful to looking at social relations in the party. However, the report’s authors appear to have approached this naively and without paying attention to easily available evidence. That there are differences between members of the party is obvious from the common practice of referring to individuals as being on the ‘right’ or ‘left’ of the party or, indeed, being in the ‘centre’. The recent history of the party further demonstrates internal divisions. Jeremy Corbyn had great difficulty obtaining sufficient nominations from his fellow MPs to appear on the ballot paper, yet the membership elected him with a clear majority. Almost as soon as he became leader, there was a formal challenge to him but he clearly defeated his opponent, Owen Smith. None of this is secret information, but it seems not to have occurred to the report’s authors to relate it to their understanding of what was going on with respect to anti-semitism in the party during the period they were investigating. In addition, in 2019 Greg Philo and other academics published the book, Bad News for Labour, which deals with anti-semitism claims in the wider context of media coverage and inner party differences – see review in Scottish Left Review 115, January/February 2020. Moreover, the EHRC report mentions, but seems to overlook the significance of, the fact that when Jennie Formby was General Secretary of the party, she sometimes used personal e-mails rather than party ones because she did not trust some of the staff. The notion of ‘a culture’ ignoring or accepting anti-semitism which they put forward is a naïve one. Referring to inner party differences would have led to a more meaningful interpretation of anti-semitism claims.

Corbyn’s election as leader obviously came as shock to many party members who had a different perspective on politics from him. Since he represented an approach to politics which was shared by comparatively few of his fellow MPs, it is not surprising that they should have looked for ways of criticising him. He has a long history of campaigning for a socialist perspective on a wider range of issues, including nuclear weapons, apartheid and racism. None of these presents an obvious basis for attacking him. For a time, Corbyn led a campaign internationally against child labour. It is difficult to imagine that being made the basis of an attack on him. Presumably, there are few people in public life who wish to present themselves as supporters of the exploitation of child workers. However, his support for Palestinians was rather different. The line between criticism of Israel and hostility to Jews is a relatively easy one to blur. The EHRC report claims to be operating in line with the ‘Working Definition’ of anti-semitism proposed by the International Holocaust Remembrance Alliance, which has been widely touted as a suitable guide to identifying anti-Jewish racism. The IHRA definition has also been widely criticised, particularly for its failure to deal adequately with the distinction between anti-semitic statements and criticism of Israel.

The investigators seem to me to have a weak grasp of the complexities of language. One example will illustrate this. At one point, they list examples of evidence of anti-semitism in social media. When I read that ‘zio’ is an objectionable term, I assumed initially that this was a misprint, perhaps ‘Zionist’ being intended. However, an internet search led me to discover this term is indeed in use, having evolved from ‘zio-Nazi’. According to a Jewish website, that word had been coined by an Israeli academic. However, my ignorance is relevant, since it illustrates the fact that people do not necessarily know the etymology of words they encounter. It is entirely feasible that someone could assume ‘zio’ to be short for ‘Zionist’. To use it would not have the implication of calling someone guilty of Nazi-like behaviour.

The report gives particular prominence to two cases it considered. Both concern people no longer members of the party. The Ken Livingston case stems from social media activity by Muslim Labour MP, Naz Shah. She endorsed a posting which had a map of the United States into which a map of Israel had been inserted, with the commentary ‘problem solved’. Shah later apologised and withdrew the post. However, Livingston said publicly that what she had done was not anti-semitic, that she had been put under pressure by the ‘Israel lobby’, who exaggerated the extent of anti-semitism in the party. The EHRC’s report does not attempt to directly refute Livingston’s argument. Instead, it stresses the extent to which Jewish Labour members had been upset by what he said. The failure to explicitly make the case of Shah’s post being anti-semitic is particularly unfortunate when one notes that the ‘put Israel in the USA’ joke was taken from a post by Norman Finkelstein, an ethnic Jew who is critical of Israel. I also note that although the feelings of Jewish members are considered relevant, there is no attempt to analyse those feelings. It seems to me that a Jewish person with a strong emotional attachment to Israel could be upset by the joke, but that in itself is not evidence of the joke’s anti-semitism.

It is also worth pointing out that although Jewish feelings are considered important, no reference is made to the feelings of left-wing members like Livingston and Corbyn, who have a history of anti-racism but find themselves accused of anti-semitism. Finally, I note that on p27 of the report it is said that Labour Party members are legally able to comment on the scale of anti-semitism in the party based on own experience. Livingston was a member at the time, so in what respects were his remarks illegitimate? I happen to believe that some of the things that Livingston said at the time were ill-judged. As a fellow-socialist, I would suggest to him that he should have acknowledged the possibility that there was some anti-semitic harassment going on in the party and that saying Hitler was a Zionist is crude way of making a historical point and unlikely to be taken well by some Jewish people. But it is not anti-semitic.

The second case described in detail is that of a local councillor, Pam Bromley. On balance I think the EHRC criticisms of her have more substance than their criticisms of Livingston. She is quoted as saying she had had unfavourable reactions to a meme she posted on Jacob Rothschild. She claimed that this was part of a critique of capitalism. There is nothing unusual in a socialist attacking capitalist but why choose this particular one to name? It is difficult to avoid the suspicion that the intention is to stress the role of Jews in the capitalist ruling class. This is especially so when taken alongside a post expressing satisfaction at an Israeli space craft crashing. She also justified the Rothschild meme on the basis that, acknowledging Nazi use of Rothschild in their ‘propaganda’, we should not ignore ‘truth’ for the sake of being ‘tactful’. Nazi ill-treatment of Jews went considerably beyond ‘propaganda’!

Most of the Pam Bromley posts cited refer to ‘fake’ accusations of anti-semitism. The case EHRC makes against her would be stronger if they could demonstrate that most such accusations are not ‘fake’. However, to do that, they would have had make some attempt to assess the actual extent of anti-semitic activity in Labour. Instead, they seem to simply assume that accusations are true. If they had taken more note of the conflicts within the party, they would have understood why some members might be motivated to make false or exaggerated claims and other members might suspect such fake claims might be made!

The EHRC report authors do not seem to understand the Labour Party. If the party is trying to confront problems associated with anti-semitism and Zionism, that report is unlikely to be helpful. Apart from the Foreword attributed to the Interim Chair, Caroline Waters, the EHRC report does not name any individual authors. Accordingly, my criticisms of the report have treated it as an institutional document. However, as I finished writing, The Guardian reported the ‘lead author’, barrister Alasdair Henderson, had been criticised for certain activities on social media including showing hostility to Black Lives Matter protesters. Although my main concern has been this report’s mistreatment of the Labour Party, it appears that a broad examination of the EHRC’s personnel is needed. This is ever more so in the light of the appointment of new Commissioners.

Sandy Hobbs is a Labour Party member and a Senior Research Fellow at the University of the West of Scotland.