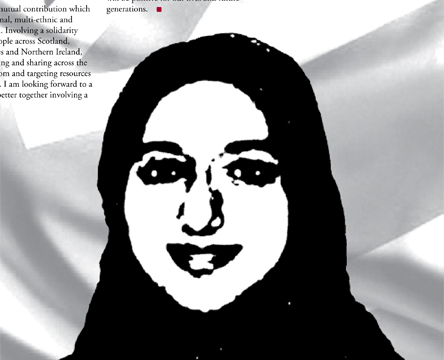 As the New Year arrived, we entered a historic year with the Referendum due in September 2014. People in Scotland will make a big political decision this year. Will they remain part of the United Kingdom or go it alone?

People are united by common cause, basic needs, irrespective of race, religion and nationality. Personal aspirations, job security, safety, home, health and equality supercede boundaries and borders. The 21st century has seen the evolution of a generation which communicates via international global social media, connected without boundaries, an increasing aspiration for international travel, discovering and exploring parts of far reaching countries. Resulting in a global community based on communication, common cause, interest and growth rather than based on borders and nations.

Despite having tax raising and lowering powers, not a single change has been made to the tax system in Scotland that would lower the amount of tax paid by the poorest. So simply having the ability to do something does not ensure that anything will be done.

The Scottish Parliament sets inward investment and job creation goals for Scotland. Holyrood has the power under the 1998 Act to alter income tax by three percentage points either way. Despite having tax raising and lowering powers, not a single change has been made to the tax system in Scotland that would lower the amount of tax paid by the poorest. So simply having the ability to do something does not ensure that anything will be done.

Moreover, waiting for the result of a referendum does not solve the problems Scotland faces now. It also oversees the performance of NHS in Scotland, is responsible for funding culture and arts, it oversaw the successful bid to host the 2014 Commonwealth Games in Glasgow. Also responsible for funding and running education systems – Scotland has its own Scottish Qualification Authority to deal with the school exam system.

Devolution and separation are two very different ideas. In September 2014 we face a choice between two different roads; continuing the success of devolution within the UK or separation from the rest of the UK with all the risks and uncertainty it brings. With the political will, Scotland under devolution already has the power to Improve our schools, optimise training, address the skills gap, gender equality, create jobs, address in-work poverty, tackle poor health, address fuel poverty, build more affordable homes, make childcare more affordable, reverse cuts to Council Tax Benefit and to mitigate Welfare Reforms like the bedroom tax.

Scottish Labour has set up a dedicated commission to consider how best to develop devolution in the future. It is looking at what further powers should be devolved, with a particular focus on whether more power should be devolved to local government and to local communities.

There is a variety of issue important to each of us, as a family or society. Naturally a concern is the impact of separation on our day to day lives, Scotland and United Kingdom.

Poverty, inequality and welfare reform are key factors affecting daily lives irrespective of borders and nationalism. Our welfare system and pensions are safer as part of the UK. Being part of the bigger UK we benefit from being able to pool the risk and share our resources across far more people, which means that right across the UK everybody is guaranteed the same level of support.

We need growth, jobs and prosperity in Scotland. In tough times, it is documented that the size and strength of the UK economy is an advantage for resilience in the job market.

Our universities are world renowned, researchers and innovators contribute to advancement as an international community. Collaboration is key to Scotland and the rest of the UK. Scotland’s universities receive over 13 per cent of UK research council funding, with a population share of eight per cent.

Day to day living; considering food prices are rising already, some of the big supermarket groups have said they could be forced to hike prices as the cost of doing business in Scotland would no longer be absorbed by their UK operations.

UK is a mutual contribution which is multi- national, multi-ethnic and multi- cultural. Involving a solidarity of working people across Scotland, England, Wales and Northern Ireland, based on pooling and sharing across the United Kingdom and targeting resources based on need. I am looking forward to a future that is better together involving a thriving economy, globally competitive, robust, jobs, fairness, transparency and a socially just society with a strategy to tackle the cost of living crisis – 2014 is an ideal opportunity to discuss the future we want for Scotland and make a choice that will be positive for our lives and future generations.