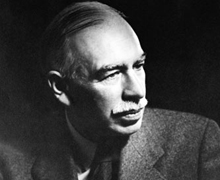 To understand our current economic problems we should start with Adam Simth. By his observations and enquiries, of the early development of capitalism, mainly in Glasgow, Smith used his knowledge and insight to probe into what we would now call economics and came out with some very interesting ideas. Perhaps the most significant of his ideas was about the role of the ‘market’ in a capitalist exchange system. He showed that the “market” although set up primarily by producers of goods and services for their own purposes, soon took on a life of its own, because it brought consumers together and gave them power, and this forced producers to meet its requirements which often conflicted with theirs. This view of the significance in economics of the ‘free market’ has been at the centre of economic theory ever since and remains so, and virtually all economic theory is related in some degree to this concept, Marxist theory not excluded.

Adam Smith ideas have since been stretched and distorted to the extent that he is cited as justifying greedy capitalism. In this way Adam Smith’s ‘free market’ theory which recognised the market’s power to influence even the people who had established it, was converted to the ‘magic power’ of the market and was developed and exaggerated until it would have been entirely unrecognisable to Smith himself. One hundred years after his book was published the ‘Classical Economists’, who were all Adam Smith enthusiasts, were teaching ‘laissez-faire’ economics which postulated that the ‘free market’ had powers of self regulation and would adjust itself back into ‘equilibrium’ if left to its own devices and ‘freed’ from human ‘interference’. What Smith had taken pain

s to show and prove scientifically, they had turned into an act of faith or religious believe which did not require scientific explanation.

Karl Marx did understand Smith and his materialist (scientific) approach. He also of course had the views of the ‘Classical Economists’ to look at as well. Marx accepted Smith’s views on this and the significance of the ‘free market’ but he rejected the ‘Classical Economists’ nonsense about a self-regulating market. He pointed out that far from being self-regulating the market was in fact unstable in two specific ways, and that left to its own devices the market would get out of control. It is the first of these that I will consider in this article.

To-day we can observe three distinct theories of economic development at work. What I will call;(1) The Chinese growth model, (2) The Keynesian model and (3) The Neo-Classical model, but since we are concerted with the Scottish economy I will leave the Chinese Growth model to one side. Marx’s first comments on the stability of the market related to the regular fluctuations in the market caused by the exaggerations in investment in ‘capital goods’ as the result of minor changes in market demand for ‘consumer goods’, and how this would lead to regular and increasing market fluctuation if not controlled. This aspect of the market’s inherent instability was picked up later by Keynes and is now widely understood.

The important thing about any economic theory is that it should be subject to testing in the real world. Smith, Marx and Keynes ask you to use logic to judge their theories. Neo-classical economics requires blind faith.

What Keynes identifies is that the market does not have a natural tendency to stable growth in ‘equilibrium’ which would ensure that all labour resources are engaged. Indeed the opposite is the case; because of the relative size and significance of capital goods production in relation to consumer goods production the market will get out-of-line when growing and create wild fluctuations. What we know as ‘stop-go’ or ‘boom and bust’ or regular ‘recession’ and ‘recovery’.In 1936 following years of explaining his ideas in papers and pamphlets Keynes finally wrote his great book The General Theory of Employment, Interest, and Money. After the experience of the Great Depression Keynes pointed out, as Marx had done before him, that this was a natural consequence of a free or unregulated capitalist market and if not addressed it would happen again and again and each time it would be more profound.

Keynes’ views were of course not taken seriously. Indeed they were soundly rejected by the classical economists of the day, which of course was virtually the whole international establishment of economists. However in 1933 President Roosevelt in some desperation and in the teeth of strong opposition from the classical economists of the day, used public investment to build the Hoover Dam and contrary to all the dire economic warnings it proved to be a great economic success. Adolf Hitler, however, without any intent, proved Keynes’s theory to be correct in a very significant way because, again in the teeth of vigorous opposition from German classical economists, he decided to spend huge amounts of public money to build up the economy with the autobahns, Volkswagen and military expenditure, and instead of destroying the economy, as economists confidently predicted, it allowed it to develop far better than its neighbours.

The Keynesian theory predicts that if there are unemployed labour and natural resources then the Government can print ‘money’ (which is just paper not wealth) and invest it in real economic activity which will increase real production and turn the ‘paper money’ into real wealth. He shows that in this process the public investment put in will result in a multiplier effect which will significantly increase the national wealth depending on a number of factors. To many people the Keynesian idea that the Government should spend more money when demand is falling and the economy is shrinking appears counterintuitive, largely because the capitalist media discuss this as though national income was a fixed sum and that public investment is ‘expenditure’ which it is not. But if you remember that money is not wealth but that real wealth is the goods and services produced then it is obvious that a country can’t become wealthier by reducing or restricting production. Only by increasing production can it do that, and if money can be used to help it do that then it makes perfect sense. What is nonsense is that it is easier for the country to pay back debts, real or imagined, by restricting or reducing its production (wealth) as the present Con-Dem UK Government want us to believe. What that will do is redistribute income towards the rich, but it will not increase total wealth and is not designed to do that.

Classical economists never forgave Keynes for questioning faith in the free market but in the years following the Second World War the Keynesian model was the dominant economic model used in the capitalist world and it was highly successful at keeping up high levels of employment and relatively sustained economic growth. This model, like Keynes himself, was never really entirely accepted in the USA although American industry and the American economy had blossomed in the increasing demand from Europe which Keynesian policies were creating there. It was this recognition in the real world that gave Keynesian economic theory the firm base which it developed in capitalist countries and which it still holds.

A small minority of economists refused to accept Keynes’ theory in spite of the overwhelming evidence for it in the real world. Neo-classical economists (though not actually ‘new’), the ‘Chicago School’, Hayek and Friedman and so on held to unswerving faith in the free market. They first appeared from their long obscurity on the world stage in 1970 as the ‘intellectual’ force behind the murderer Pinochet whose Government was happy to experiment with Friedman’s neo-classical economics on the no longer democratic Chile. History shows what that experiment did for the Chilean people and economy. It impressed Sir Keith Joseph and Margaret Thatcher of course, and this left a strong footprint in British economic policy, but this ‘monetarist’ version of neo-classical economics had a very short shelf life.

People tell us and write about public spending ‘crowding out’ private investment, and so public expenditure must be cut in order to allow the ‘natural’ private investment to flourish. This of course is just another variety of the neo-classical nonsense. The ‘logic’ is that public investment ‘interferes’ with the market’s ‘natural’ tendency to self-regulate. This has no logical base. They are back to the magic again and have ditched the science.

The important thing to remember about any economic theory is that it should be logical and explainable and subject to testing in the real world. Adam Smith, Karl Marx and John Maynard Keynes ask you to use logic to judge their theories and that is all you need. Neo-classical economics requires blind faith; blind faith has no place in economic theory. If we look around the capitalist world to-day we can see distinct versions of the Keynesian theory and the Neo-classical theory of economics being advocated. The present UK Government is perhaps a good example of the Neo-Classical theory; cut public investment in order to pay of debts and depend on private investment taking over naturally (as the market self-regulates) to bring us back to full employment. The fact that this has repeatedly failed historically is ignored and the mantra that we have no alternative is being used again to defend this incoherence. The British Labour Party has followed sheepishly behind.

On the other hand if we look at some of the Scandinavian countries you can observe that they have adopted a Keynesian model of development and use a large and diverse public sector to help regulate the free market. As a result they have had less economic instability, have not squandered their natural resources and are per capita much wealthier than the British.

The Capitalist world is currently confronted by a financial crisis which is threatening to wipe out international currencies entirely and to decimate the economy of many countries. If we take Greece as an example, Neo-Classical advice is that they stick to the current international currency they are in, at the same level, and cut public investment, while selling off public assets (at extremely low prices) in order to solve their ‘debt’ problem. But everyone knows this medicine will made the patient worse. It will clearly not allow economic growth, but it will redistribute wealth towards the super rich, which is its real objective. No one can be in any doubt that countries with a Keynesian model, and withsignificant public sector resources and assets, will be in a better position to survive this financial crisis even if the currency they are currently using does not.

This is the model which Scotland needs to hold to, get control of the economy from the Con-Dem wreckers, hold on to the public resources and assets and employ a Keynesian model of economic development as the present SNP Government is trying to do. We need not concern ourselves with what happens to the Euro, Dollar or Pound, because some, if not all of these, may fail during the crisis, and it is real resources which will be important. Scotland is presently tied into all three of these currencies because although it is officially using the Pound, its oil resources are tied into the Dollar and its exports and tourist income is substantially in the Euro sphere. Therefore any disruption in any of these international currencies will affect Scotland. But remembering that money is not wealth we should be more concerned to protect employment and production than currency.