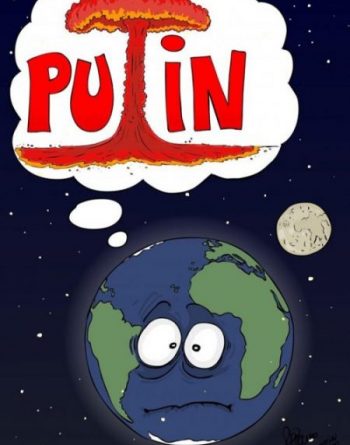 Peter Lomas surveys the contours of an increasingly dangerous and unstable Europe.

Someone once said that nuclear weapons make the world safe for conventional war. This was certainly what Vladimir Putin thought when he declared, on launching the Russian invasion of Ukraine, that ‘whoever tries to interfere with us, and even more so to create threats for our country, for our people, should know that Russia’s response will be immediate and will lead you to such consequences as you have never experienced in your history’. Three days later the Russian President publicly placed Russian strategic nuclear forces on heightened alert.

Former Prime Minister, Gordon Brown, recently called for a Nuremberg-style trial of Putin for war crimes, led by the crime of aggression. This was described, in Judgment I of the Nuremberg Tribunal, as ‘the supreme international crime, differing only from other war crimes in that it contains within itself the accumulated evil of the whole’.

Goodness knows, enough crimes already have been committed by Russian forces in Ukraine to merit the indictment of their leader for war crimes: violent invasion of a peaceful sovereign nation; bombing and shelling of civilian homes, hospitals and schools; deliberate revenge killings of civilians; use of thermobaric weapons – the list is growing and to us, growingly familiar.

But the point of Putin’s nuclear blackmail is that it made all this infliction of horror possible – even after Western leaders had said that NATO forces would not intervene to defend Ukraine. Ethically as well as logically, therefore, the threat to use nuclear weapons as a means of deterring opposition to the Russian invasion ‘contains within itself the accumulated evil of the whole’ which ensued.

NATO leaders’ response to Putin’s nuclear threat was, in the event, rather measured – dismissing it as rhetoric, a sign of desperation by an aggressor who glimpsed at the last moment the possibility of failure. This was surely wise. Partly because, as the Bible says, ‘a soft answer turneth away wrath’, so avoiding the risk of a provocation. But also, a counter-nuclear threat would have further normalised these weapons as the basis of international security. And arguably, the Cold War had disproved this assumption simply by coming, in 1989, to a peaceful end.

Much has been made recently of overlooked instances of the Russian leader’s evil interventions: the destruction of Chechnya, the invasion of Georgia, the KGB poisonings in Britain of Litvinenko and the Skripals (preceded by that, in Ukraine in 2004, of President Yushchenko). But all this was eased by the cynical reconstruction, in 1991, of independent Russia as Soviet inheritor-state, in which Western governments were at best passive observers, at worst purblind accomplices.

The demagogic nationalist Boris Yeltsin, having been expelled from Gorbachev’s Politburo, became breakaway Russian President, thereby seizing the command-and-control, in Moscow, of former-Soviet nuclear weapons. He proceeded to the dismemberment of the Soviet Union at Belovezhskayaka Pushcha in Belarus, making provision for the (inoperative) former-Soviet nuclear weapons outside Russia to be ‘returned’. But not before he had run to the UN Security Council – warning histrionically of nuclear chaos if the weapons were to be ‘dispersed’ out of his own hands – in order to press for the recognition of Russia as successor-state to the USSR, with all former Soviet rights and privileges. This was the first act of Russian nuclear blackmail. Vladimir Putin was Yeltsin’s last Prime Minister and chosen successor.

Many international conventions have been broken since then, with the connivance of other Security Council members. The Vienna Convention on the Succession of States (1978) insists on ‘the replacement of one State by another in the responsibility for the international relations of territory’. But the Russian Federation hardly corresponds territorially, ethnically or demographically to the USSR, a multi-ethnic polity occupying the largest legal space in the world. So why was Russia (never previously a UN member) accepted ‘back’ into the UN in the Soviet Union’s place?

Moreover, Article 1 of the Nuclear Non-Proliferation Treaty (NPT) (1968) stipulates that: ‘Each nuclear-weapon State Party to the Treaty undertakes not to transfer to any recipient whatsoever nuclear weapons or other nuclear explosive devices or control over such weapons or devices directly, or indirectly’ [emphasis added]. So how did Soviet nuclear weapons get officially into Yeltsin’s (and now Putin’s) hands? There should simply have been one fewer nuclear-weapon state in the world. Finally, the great majority of nations had agreed to sign the NPT and never seek nuclear weapons, on assurances from the ‘official’ nuclear-weapon states never to use or threaten to use such weapons against them. This being the last taboo that Putin, in respect of Ukraine, has violated.

How did all this wrongdoing come about, allowing all the aforementioned atrocities against martyred Ukrainians? Through Russian nuclear blackmail. As Hobbes remarked, to threaten unarmed strangers with violent death undermines all civilised society. Nuclear blackmail, then, must be included in the charge-sheet of the Russian President’s arraignment, followed by measures to put nuclear weapons permanently beyond use.

Dr Peter Lomas is the author of ‘Unnatural States: The International System and the Power to Change’ (Routledge, 2017). He was Rockefeller Research Fellow in Nuclear Non-Proliferation at the Centre for European Policy Studies, Brussels, in 1987-1990.

A case to leave NATO and for Scottish neutrality