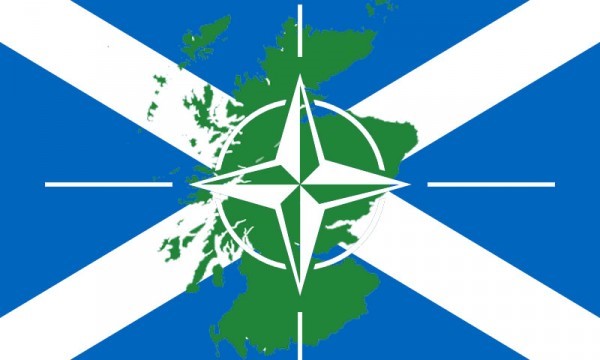 Should an independent Scotland leave the NATO military alliance? It’s possibly not the most pressing issue for the Scottish independence movement at present, when compared to the more demanding issues such as how Independence can be achieved, the timing of a second referendum, and what kinds of trading and border relationships with the EU and post-Brexit Britain might the new state have. Yet the question of Scotland’s future membership of NATO is an important one that will need to be addressed at one stage or another. Let’s evaluate some of the arguments advanced for and against continuous NATO membership.

Firstly, assuming it attains independence, Scotland will need to i) dislocate itself from its current integrated relationship as part of the UK armed forces system, and ii) identify a new set of defence needs and purposes for the Scottish state’s armed forces. In both areas, there is room for significant drift away from NATO. For example, the present British military is designed not to defend the home islands but to fight offensive European wars in conjunction with its NATO allies in specialised battle groups. Since that is the case why would any newly developed Scottish Defence Force (SDF), especially its army element, look to reconstruct such a position?

Breaking apart from this structure of UK defence would, thus, foster a new mindset among Scottish strategic-defence planners. A primary objective in this context would be to make the defence of Scotland itself and not a long past threat from Russia as its principal consideration. Encouragingly, current SNP policy thinking shows good awareness of this by its acknowledgement that the country’s long coastline and maritime resources necessitate a new prioritisation, aspects that have been long neglected by its incorporation within the British union.

In the main, therefore, Scotland would face very few threats to it from conventional state-led assault or from a weapons of mass destruction (WMD) component that would justify the present disposition of the Scottish part of the British military. The key ‘threats’ at best are those of international terrorism, cyber warfare and possibly climate change damage from flooding and destruction of critical infrastructure. Yet despite the rhetoric, NATO membership would provide dubious ‘added value’ in these areas with a military-led response even being unsuitable in some of those cases where different forms of international cooperation would be more effectively explored. Furthermore, participation in current NATO missions is of questionable value (e.g., Kosovo) whilst others in Afghanistan seem no longer to be of any long-term utility and are at any rate coming to the end of their runs with the planned American withdrawal in September of this year. Despite the global Islamist threat and the earlier Northern Ireland conflict, the country has at any rate little history of being a target for violent paramilitary terror assault.

The post-independence alternatives for Scottish defence have been the subject of much fertile national debate both within the Scottish political establishment as well as related think tank communities. Various models from the Nordic approach of cooperation to Irish neutrality have been advocated. The parameters suggested by commentators like Dorcha Lee, a retired Irish Army Colonel, include, for example, a numerically smaller two brigade Regular-Reserve Army. The latter would focus on home defence and the former on offering first line terrain protection and expertise for humanitarian, military observer and peace building missions with an integrated Special Forces element for counter-terrorism tasks and protecting North Sea oil areas. Within these capabilities, a Brigade dedicated to Cold Weather fighting would accurately meet Scotland’s defensive needs over its own landmass. It would also be worth exploring as an optimal solution with the remaining UK an integrated air defence system covering both countries. In parallel, an enlarged Scottish Naval-Coastguard with air support built around the US model is another route by which the country’s defences could be bolstered to deal with issues such as organised crime, threats to its significant fishing stocks and illegal trafficking of people and goods.

Whatever the final formation agreed, the basic aims would be protection of Scotland itself. Thus, the persistent belief that any SDF will need NATO as a guarantor of its security, even without the need for nuclear weapons, is wrong. Scottish membership of NATO could be seen as important to reinforce NATO’s overall strategic disposition especially in the Arctic and the Greenland Gap but that offers little to an independent Scotland re-examining its future European and global security needs. Indeed, re-joining NATO would replicate the damaging Cold War mindsets of seeking an external ‘enemy’ and risk the building of a genuinely defensive military model for Scotland. Hence, NATO’s emphasis on ‘interoperability’ and ‘standards’ bias member states towards ever higher levels of military spending that emphasise large proportions of expensive weaponry like advanced tanks and artillery. Little of this would be of any use to a Scotland no longer viewing the world in such adversarial terms and whose own physical geographic interior is a barrier to any (unlikely) attacker.

By moving towards a Scottish defence based on its own interests, Scotland could start to discard the overhangs of NATO membership. For example, rescinding the Nuclear Trident programmes would mean it no longer having to serve the two large Naval ports of Faslane and Coulport. Both could be closed or alternatively used as part of the enlarged Scottish Naval-Coastguard HQ with the freed-up staff being redeployed elsewhere. The country could also abandon any use of submarines that would be inappropriate for a nation of its size – neither New Zealand nor Ireland, countries of comparable size, have a submarine fleet – or instead keep a very small deterrent fleet.

All of this is suggestive of a move towards a neutral Scotland. It is but we should not incorrectly interpret such a development as a future SDF withdrawal from the world per se. The latter’s expertise in areas drawn from its British experiences could be elaborated in international military policing, UN peacekeeping, logistical expertise in emergency relief including pandemics and field hospital work, all of which can offer much needed services at times of international and regional crises. For instance, retaining a satisfactory air transport fleet including a portion of the Hercules planes after independence could help in all these respects. Specialised forces could also be used on a UN Security Council approved basis or as part of EU missions to deal with acts say of international terrorism if Scotland re-joins the latter. It would be a neutral Scotland but one that is firmly humanitarian and externally outlooking in its orientation.

A final argument for NATO withdrawal is, of course, financial savings. These have the potential to be considerable and would be in addition to the economic benefits in removing the Trident submarine fleet and weapons. Various investigations have shown that if Scotland adopted Ireland’s average GDP expenditure on military spending (as a non-NATO member), it could save over £2bn pa from its new defence budget. At the very least, the cost of defending Scotland itself would not need be anything like NATO’s aspirational 2% of GDP spending on membership or the over 4% that it currently stands at within the Scottish budget. The nation could very reasonably be protected with only 1.4%-1.7% of GDP (approximately the EU average) dedicated towards defence. It would also not be starting anew, obtaining some of its share of the military hardware from the old UK for its Air and Naval elements (Two frigates, possession of RAF Lossiemouth etc). Moreover, a well-planned Defence Transformation Fund could offset the losses of the arms manufacturing industries (though indigenous capabilities should not be entirely forsaken) in Scotland towards a programme of investment in alternative peaceful production with tax raising potential to mitigate the anticipated loss of NATO related expenditure in the economy.

The struggle over Scottish disengagement will be waged politically especially in the international sphere and with the rump rUK government at the same time. An expressed desire by Scotland to seek, at best, a different relationship with NATO through say the Partnership for Peace (PFP) scheme may well be regarded as a prelude to a fully detached connection with the Alliance and that does not even include the complex issue of the safe removal of nuclear weapons. NATO would make a strong effort to re-secure full Scottish membership. It is an open secret after all that NATO lobbied the SNP vigorously behind the scenes of the 2014 independence referendum for such an outcome.

It’s possible that any new post-independent Scottish Government could explain through its existing diplomatic channels that its neutrality policy was not initially a fundamentally non-aligned policy. This would still indicate that it was sympathetic to the West and would not be openly pro-Russian (or equally unnecessarily hostile to Russia) or whatever orientation that might generate unnecessary disquiet among its various European neighbours. A not dissimilar stance has helped Finland, a non-NATO member, in its relations with Russia to convince the latter not to push it into the NATO orbit whilst Iceland which is a NATO member has no standing military of its own, thus, placating Russian concerns in the Artic shipping channels. Another northern neighbour, Denmark, has been cited by former SNP MP, Stephen Gethins, as one Scotland could emulate as the nation has no submarine fleet but has conversely paid an often-overlooked human price as a NATO partner in military interventions such as in Afghanistan and Libya.

None of this should underestimate either the geo-political repercussions of an exit from NATO. The undermining of its presence close to Arctic routes would be felt by NATO as would the hole in its nuclear umbrella, but we should not exaggerate these points. It’s possible that new agreements could be formed by the SDF to undertake tripartite exercises with NATO and UK forces to bolster the former’s cold weather fighting expertise and other military-naval exercises on a need-by-need basis. Tensions with the rUK, which would stay within NATO, could be improved by a sensible division of military assets and liabilities and the aforementioned common air defence system with Scottish defences focusing heavily upon protecting urban centres and pivotal areas like its main sea ports.

The outcome of the 2021 Holyrood elections saw the anti-NATO Greens increase their number of seats and reinforce those who seek within the SNP to have a reconsideration of NATO membership. Yet this situation is complicated by SNP divisions with conservative elements, expressed in statements by the party’s Westminster defence spokesperson, Stewart McDonald, seeking a more hawkish pro-NATO stance whilst SNP CND see no logic in discussing NATO membership prior to the removal of the Trident submarines. The latter, again inspired by the Finnish example, see the ‘prospect’ of NATO membership as a lever to extract diplomatic ‘good behaviour’ both from NATO and Russia, which is what Finland achieves and does so admirably. Yet the truer prize for Scotland outside of NATO remains arguably though a security policy wedded to both peaceful co-existence and not confrontation behind regionally armed blocs. This is an opportunity to be seized and not diluted on the path to independence.

Kailash Kutwaroo is an independent researcher with a public policy background in local government, NGO and public sectors. He is planning to undertake doctoral study into the role of the UN safe areas in the Bosnian civil war of 1992-1995.