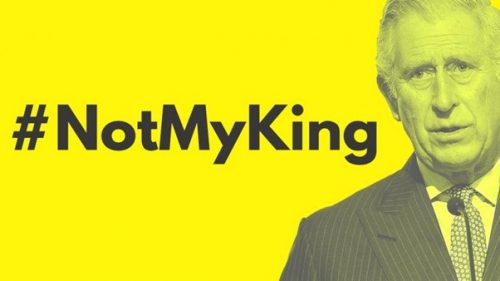 Bill Bonnar examines the feting of the monarchs but sees the prospect of change ahead.

As socialists, we were dreading it. Not the passing of the queen but rather how it would be marked and we were not disappointed. Ten days of carefully manufactured mass hysteria; not only to mark the passing of the queen but as a triumphant endorsement and celebration of monarchy. Of course, the views of the millions of people who do not support the monarchy were brushed aside in a frenzy to portray the queen as a combination of everyone’s favourite granny and a kind of living saint. In fact, if the queen had been Catholic (sic) then the process of her elevation to sainthood would be well underway. Some of the coverage was, to say the least, highly distasteful. Describing her death as a tragedy. She was 96 years old. It was sad but hardly a tragedy when compared to the hundreds of thousands of people who lost loved ones during the Covid pandemic. Some simply bordered on the bizarre like portraying her reign as a great achievement.

What achievement? She was born a princess, became queen at a young age because her father died at a young age and was queen for a long time because she lived for a long time. Wherein lies the achievement? Many will have watched the recent Andrew Marr BBC programme about the modern Elizabethan era highlighting the immense economic, social and technological changes which have occurred in Britain during the past 70 years and somehow relating this back to the reign of Queen Elizabeth as if the Crown had anything to do with these changes.

This portrayal of the Queen as some kind of great and larger than life figure is all part of the cult of monarchy and has a long history particularly when you contrast the myth with the person actually occupying the throne. The Queen’s father, King George, never really wanted the job and was painfully unfit for public office. His predecessor, King Edward, had to abdicate due in part to his fascist sympathies and his connections to the Nazi regime. His father and grandfather, George and Edward, were notorious philanderers who if their reigns had been subjected to modern scrutiny would have been mired in scandal. Before them, Queen Victoria was an essentially absurd woman who spent most of her reign hiding away from public life although even that could not compare with the assortment of King Georges who preceded her; each more ridiculous than the other. The point here is that any non-entity could occupy the throne: it was the throne itself which was all important. In fact, prior to Queen Victoria, the main reason for someone to occupy the throne was to stop someone else occupying it.

In the modern era, the Crown is marketed like any other product; a process of continuously selling and reselling the monarchy to the British public. A bit like toothpaste. For the Queen, that was fairly easy and we can see the process well underway with William and Kate. For the royal publicity department, Charles is a harder sell. They can hardly portray his ascension to the throne as a fresh start. He is 73 years old and has been around for what seems like forever. Under Charles, the monarchy is in a kind of holding position and it would not be fanciful to believe that he will be king until he dies given how long these people tend to last. One thing for sure is that under Charles we will see a monarchy in retreat. The lavish lifestyle and endless list of royals drawing from the public purse will not be tolerated by a public suffering in austerity Britain. Even his coronation is expected to be a more modest affair. Perhaps, more significantly are the number of Commonwealth countries now queuing up to ditch the monarchy. Earlier this year, Barbados jumped the gun and proclaimed a republic. Others had been simply waiting for the queen to die to go down a similar road. Even with countries like Australia, New Zealand and Canada, the issue is rising on the political agenda with many asking why they have a foreign king as head of state.

For republicans, the opportunities will now open up to expose the monarchy for the outdated relic of medievalism that it is and to make the case for a republic. Prior to the emergence of capitalism, the monarch sat at the head of an aristocratic ruling class and was the embodiment of the wealth and power of that class. In Britain, with the transition from feudalism to capitalism that aristocratic ruling class morphed into a capitalist ruling class with the crown providing a bridge from one era to the other. This is in contrast with France where the feudal ruling class was largely destroyed by the revolution to be replaced later by an emerging capitalist class. This resulted in republicanism being the driving force of political development and to this day represents the highest of values in the French political system. In Britain, in modern times, the monarchy has come to represent stability, order and tradition all wrapped up in the idea that we need to maintain the status quo. In other words, it has developed a role in the defence of the capitalist system and has now been built into the very fabric of that system with those arguing against it portrayed as dangerous radicals.

Yet republicanism is so much more than simply the absence of monarchy (see accompanying article, this issue). It is the philosophical expression of modern democratic government. It embodies ideas such as civil rights, citizenship, elected and accountable government and progressive democratic advance. It has been at the heart of every progressive political movement in history from the American and French revolutions of the eighteenth century to the Russian and Chinese revolutions of the twentieth century. While monarchy has come to symbolise reaction; republicanism symbolises progress.

In Scotland, the position and status of the monarchy is very different from that in England. The monarchy enjoys far less support. In fact, active support for the monarchy has declined markedly over the years. The most recent Social Attitudes Survey, albeit taken before the Queen died, put support for the monarchy at 35% with the remaining 65% were either opposed or completely indifferent. For this latter group, the monarchy is seen as a largely English preoccupation. It explains why royal events, even the Queen’s funeral, are not marked to anywhere near the same extent as in England. That is why many people in Scotland will have been utterly bemused by the cringing tributes to the Queen coming from leading figures in the Scottish Government like Sturgeon. It also poses a vital question for the independence movement. For the SNP, the king would continue to be the head of state in a future independent Scotland. While accepting there is a tactical consideration at work here, most people would find it absolutely absurd that an English king would be the head of state in Scotland, no matter how often he wears the kilt. After independence, there would certainly be a referendum on the issue with only one conceivable outcome, namely, Scotland would become a republic.

Again, however, having a republic means much more than simply the absence of monarchy. Would an elected head of state be primarily ceremonial as in Ireland or have executive powers as in France? What other reforms to the political system would accompany this change? If the people of Scotland become citizens of a republic rather than subjects of the Crown, how do we then wish to define citizenship?

At the heart of all this are two competing visions of independence. For the SNP, independence is essentially a minimalist project. Independence is an end in itself and an independent Scotland will basically look very much like it does today. In fact, the SNP’s central message to the Scottish people is: ‘Don’t worry, it’s ok to vote for independence because nothing much will change’ which of course begs the killer question: if nothing much will change, why bother with independence? The alternative is to see independence, not as an end in itself, but as a means to an end, namely, the radical transformation of Scotland into something different and better. That transformation would see the establishment of a modern, democratic republic and, eventually, a modern socialist republic.

Yes, a republic! But what sort of republic?

The his and her family firm: The publicly-funded pinnacle of inequality in wealth and power