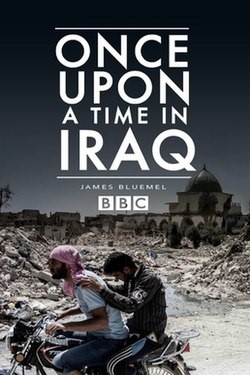 James Bluemel, director (2020) Once Upon a Time in Iraq, KEO Films – Reviewed by Jackie Bergson

Award-winning documentary series, Once Upon a Time in Iraq, focuses upon the experiences of civilians, journalists and soldiers who were actively involved, or involuntarily trapped, in the midst of war conflicts in Iraq during the past two decades. James Bluemel directs unobtrusively, giving respectful space to interviewees to express their emotions, memories, rationalisations and viewpoints. Andy Serkis partially narrates.

The period surrounding, and including, the UK and USA invasion of Iraq in 2003 is clearly identified as a historical point of ‘no return’. The official, political perspective that Iraq was made safer and more stable as a result of this military action is consequently revealed to have been misleading.

We learn that six weeks before large-scale war erupted in Baghdad, coalitions of UK and USA troops were deployed to Iraq, to clear the way. US Lt Colonel Sassaman speaks of the consequent invasion as being ‘God-like [in deploying soldiers who were] programmed to kill’; that ‘Iraq should not be connected to 9/11 but unfortunately it is’. He concedes: ‘I was out of control … [and] will never use a weapon again’. His particular account exposes the normalised psychology which many soldiers adopted in those circumstances.

Similarly, when Bluemel asks elite US Marine Sgt Rudy Reyes if he thinks the invasion was worth it, the soldier responds: ‘Yes, it’s worth it … I mean it has to be … What’s the alternative?’ He openly downs a fair amount of Tequila during his interview, for reasons which he does not share with the viewer.

We learn that Baghdad was considered to be liberal and advanced, before Saddam Hussein became a target for the Coalition. Iraqi filmmaker and rock musician, Waleed Nesyif, explains: ‘You [had] to say ‘may God protect him’ [whenever you said Saddam’s name] … children believe him to be immortal, a grandfather [which they learn] at school’. Nesyif recalls his reasons for rejecting the tyrant, who he knows killed innocent people.

Iraqi comedian, Ahmed al Bashir, tells of having to hide his interest in the West from his religious father and his family while he was growing up. He uses the metaphor that he and his friends shared a love of Western tastes to ‘hide the darkness around’ them. He describes being surrounded by pro-Saddam propaganda, which triggered resentment and mistrust amongst followers and non-followers of the regime.

Tikrit farmer’s wife, Um Qusay, does not hold back about her hatred of President Bush and his invasion of her country. She states that: ‘he [Bush] has the devil in his face’ and that his predecessor, President Clinton, ‘bombed Iraq because he hated Iraq’.

American war correspondent, Dexter Filkins, reflects on feelings of foreboding from civilians who he encountered in Iraq; thoughts of ‘what are we getting into here’; of events that changed the world; and of a hell from which there would be no way back. By contrast, Australian journalist, Ashley Gilbertson, conveys feelings of guilt about the cost of ‘getting the picture’. This relates to the killing of his friend, soldier Billy Miller, as he tried to clear the way for Gilbertson to photograph an insurgent who was hiding out. By contrast, a former adviser to Saddam admits that he ‘misses’ his leader, despite understanding where he went wrong.

It becomes clear that when Bush ordered Saddam and his sons to leave Iraq in 2003, this triggered an influx of their supporters into Baghdad. Bombings then occurred all over the city; banks and shops were looted; oil stores were set on fire; and ‘the skies literally going dark’ signified doom to its citizens. Iraqi Bathists were targeted by Bush to be removed from office: al Bashir asserts that ‘everyone in Iraq is a Bathist… [the] USA agenda [therefore] put people on the street’. We are also reminded of the shocking broadcast by US Secretary of Defence, Donald Rumsfeld, who called the resulting chaos in Baghdad ‘an acceptable phase’.

Footage of native translator, Samir Al Jassim, uncovering the dishevelled tyrant’s hideout in a shallow bunker in 2006 is a powerful reminder. As is that of Saddam being tried and convicted for crimes against humanity; and of his sneering arrogance and lack of remorse. His consequent, unceremonious hanging in the presence of western and Iraqi officials in November 2006 is also aired.

Once Upon a Time in Iraq was released when Biden was elected as USA President. In 2021, the mass evacuation of western coalitions followed an expansion of aggressive takeovers of Iraq by armed insurgents and Taliban. Bluemel’s documentary exemplifies the insightful value of free speech in these contexts. Gold standard, unmissable.