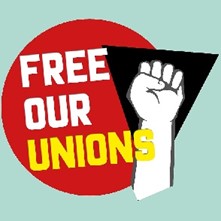 Then prospective PM, Liz Truss, announced a raft of new anti-strike laws she plans to introduce if elected. This includes: i) action within 30 days of taking office to introduce the ‘minimum service requirement’ outlawing all-out transport strikes that the Tories pledged in their 2019 manifesto for transport – but extended to other sectors too; ii) doubling the minimum notice period for strikes from two to four weeks; iii) raising the ‘double threshold’ for strikes, currently applicable in certain ‘essential’ sectors, from 40% of the whole eligible membership voting ‘yes’ to 50%, and extending the ‘double threshold’ to the whole economy; iv) some sort of ‘cooling off period’ meaning unions cannot strike at will after a ballot mandate; and v) outlawing or restricting strike pay. Shortly afterwards, Transport Secretary, Grant Shapps, announced his own 16-point plan to restrict strikes, much of it overlapping with Truss’s proposals.

Effective workplace organisation and strikes are already heavily restricted being what Tony Blair once proudly called ‘the most restrictive union laws in the western world’. Truss and Shapps’ proposals would substantially reduce strikes from a leveraging of workers’ power to token protests, with limited impact.

We cannot afford to repeat the campaign against the Trade Union Act 2016, a largely desultory affair culminating in a single national rally and parliamentary lobby. Truss is, of course, responding to a rising tide of class struggle and pandering to the reactionary core of the Tory base by promising to stem it. But Truss’ opportunism also results, in part, because of our movement’s failure to maintain meaningful ongoing agitation against existing anti-strike laws that she feels confident to propose such sweeping and extensive new restrictions.

Several union general secretaries have spoken strongly about campaigns of resistance to the Tories’ threats. RMT general secretary, Mick Lynch, has rightly emphasised the extent to which Truss’s plans are an attack on democracy. A society in which workers do not have freedom to organise and take action at work is, in effect, a dictatorship of the boss class. The most immediate thing unions can do to resist is continue, intensify, and coordinate existing campaigns of strikes. But specific action that raises demands against the introduction of new anti-strike laws, and for abolishing existing ones, is also necessary.

Lynch has also said he ‘would be looking for a general strike, if we can bring that off’, in response to the threats. CWU general secretary, Dave Ward, told a workers’ picket line on Friday 29 July that he had spoken with Lynch and UNITE and GMB general secretaries, saying ‘we believe it is time now to consider calling for forms of collective action that every worker … can participate in.’

Although the proposals lack clarity, their sentiment is welcome. But calls for radical action are not much use if they are only calls. Unions have it within their power to immediately begin organising action against the proposals. National and local demonstrations, for example, will not by themselves stop new laws but they can contribute to a wider campaign that could. We must avoid a situation where union leaders call for militant, but more distant, forms of action, whilst failing to organise immediate campaigning. Organisation and mobilisation around immediate action is necessary to make the more militant and explosive forms of action, including those that directly defy the laws, realisable.

The RMT, Unite, GMB and PCS unions as well as the TUC, have specific policies, passed or renewed since the 2019 general election, committing them to organise campaigning against anti-union laws. RMT’s and Unite’s policies explicitly resolve to work with other unions to call demonstrations against both the existing laws, and the Tories’ 2019 manifesto commitment to impose minimum service levels during transport strikes. Labour Party activists must also organise to extract commitments from the party leadership to repeal anti-strike laws in government, in accordance with Labour conference policy. Lobbies and protests on this issue at upcoming Labour and Tory conferences also seem an obvious step.

There are also opportunities for unions to confront existing laws, even short of outright defiance. For example, striking unions can highlight the pay demands of other groups of workers, as some RMT leaders have already begun to do. This would not directly violate the law against unions striking for ‘political’ demands, or the prohibition on striking in solidarity with other workers, but could highlight the injustice of those laws and perhaps test their limits. RMT also has policy from its 2021 AGM committing the union to ‘non-complicity’ in setting minimum service levels.

The Free Our Unions campaign plans to contact unions that support us, and campaigns such as the Institute for Employment Rights and the Campaign for Trade Union Freedom, which are also active on this issue, to discuss joint activity and national campaigning.

Some in the movement have argued that, with no immediate prospect of electing a government likely to repeal the laws, we should focus on organising to defy them rather than campaigning for their repeal. But not only are the two things not counterposed, one is a prerequisite for the other. A concerted national campaign that confronts the laws, demanding their abolition and replacement with a full, legally-enshrined right to strike, can help us develops the courage and confidence to directly defy them.

Writing in a personal capacity, Daniel Randall is a railway worker and RMT Bakerloo line branch assistant chair and a co-organiser of Free Our Unions. Free Our Unions is a grassroots campaign against anti-union and anti-strike laws, supported by the RMT, FBU, PCS, and IWGB, as well as 60 local and regional union branches, committees, and Trades Councils – see https://freeourunions.wordpress.com/

COVID 19: government failures counter-balanced by solutions from unions and NGOs