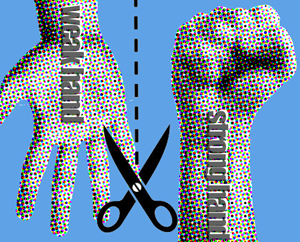 Scotland owns 24 stops on the London Underground. So let the national debate begin; which ones do we want? And what shall we do with them? For example, could we take Westminster and simply close it? The extra walk from Victoria might aid the health of some of our more rotund MPs. Or perhaps we might take all stops in and around the City of London and simply add a ‘bonus’ onto the ticket price. It would be three or four hundred times the price of the ticket but we’d justify it on the basis that there is a competitive market in the field of bare-faced greed and that the bankers can hardly expect us not to maximise the value of our asset. By fleecing them.

Or perhaps we’ll just take a cash value. After all, the London Underground was designated (by London politicians) as ‘national infrastructure’ and made the nation pay for it. That therefore makes it a shared asset. So is Diego Garcia, an entire island we stole from its inhabitants to build a military base. On the assumption we don’t want a corner of it, we’ll probably take that as a cash value. On the subject of islands, why don’t we just guarantee our EU membership by offering Spain our nine per cent of Gibralter as a sweetener? It’s not like we have any real use for it.

Scotland would do a good job of negotiating our independence, of that I’m in no doubt. It would leave us in a good position to start to rebuild the architecture of our society. What we do with that opportunity is up to us.

One of the tricks that is being played in the referendum campaign is to present Scotland as a powerless supplicant in any negotiations over how assets and liabilities are to be divided between us if there is a Yes vote. It is the sound of the same-old establishment types explaining to us that the British Civil Service is peerless and Scotland would have no chance in negotiations against the finest fellows to emerge from the playing fields of England’s private schools.

Another of the tricks is to make sure that no consideration of post-Yes processes must be allowed to consider secession negotiations as something positive. They must only be understood as the process through which London punishes Scotland for its cheek and allocates to us the debts it has amassed. The idea that this might be a positive event for Scotland is not to be considered. The idea that this is a mutual process cannot be discussed. It is very simple; Scotland will damn well be paying off our share of the credit card bill but Whitehall is keeping the flat screen telly.

And now back into the real world. In fact, the track record of the negotiating powers of the civil service is not impressive. The litany of occasions on which it has been turned over by the private sector is too lengthy to consider properly. Just remember – they are paying billons for aircraft carriers they are going to park somewhere and ignore because they managed to agree a contract for something they didn’t need which made it more expensive to cancel the contract than to pay for a luxury weapon with no purpose. Either they are truly awful at negotiation or they routinely allow themselves to be out-negotiated. Either way, there seems little to fear.

In Scotland we have many people in our trade unions and our business community with more than a couple of years of negotiation behind them. They may not have made Winchester College’s First Eleven but I suspect this won’t leave them overly worried when a ‘team Scotland’ negotiating committee is put together. We have many first-rate laywers and academics who will be more than capable of supporting those negotiations.

But do we have a negotiating hand? Again, to listen to the tone of the discussion you’d think Scotland will be lucky to come out of these negotiations still in posession of our underpants. After all, Ed Balls has told us that we’re not getting to use Sterling and he’s not bluffing. Now, aside from the fact that my observation has been that people who are not bluffing seldom say ‘I’m not bluffing’, I suspect he may be. If Sterling loses Scotland, overnight Sterling ceases to be a petrocurrency. I’m not sure the money markets will like that. They certainly won’t like the fact that Sterling’s balance of trade would collapse without North Sea Oil exports. And if Scotland is required to create its own currency (which I suspect we could manage just fine if we were forced), what mechanism is there for imposing on Scotland any part of our share of Sterling’s national debt? In one night Sterling would become a much more indebted currency on the back of a significantly lower tax base with a serious balance of trade deficit and a serious hit to its internatioanl reputation. I have never believed that Scotland will be denied the use of Sterling.

But if it happens, if London follows through on a fraction of its threats (border posts to hem us in, total lack of military or security cooperation and all the rest) then London should undersand that pig-headedness works two ways. So for example, in that context the next time the British military were to see any of its assets in Scotland might be on TV. If anyone is spluttering at that idea, why is ‘you’re not using our currency’ any different than ‘fine, you’re not using Cape Wrath’. We might decide simply to stop selling electricity to England. Or perphaps we might designate all members of Tony Blair’s government as war criminals and post arrest notices for them. We could reposess Daily Mail editor Paul Dacre’s 3,000 acres of Scottish land and see him in court. Or we could just cut off the phone lines to the tax collection centre in East Kilbride and London could just ask people to have a whip-round to fund their state instead.

Of course, we won’t. But nor will London bomb our railway stations or refuse to give us our share of assets. In the real world, the rest of the UK could no more afford to destroy relations between our nations than could we.

Now, this is most certainly not intended to be any form of macho posturing. It is an attempt to apply in the other direction the sort of sub-Swiftian parody that passes for debate. I had an extended conversation with a journalist in which I just couldn’t get various obvious points across to him. He kept asking how we could afford to pay for Royal Mail renationalisation. I had to point out that it would not be expensive (it is time some people educated themselves on international law regarging compulsory purchase). But I also had to point out that we’d be rebuilding an entire natioanl infrastructure and that mail renationalisation would be a minor issue. How could we afford it all was all I was asked. Eventually I did lose my patience a little – “is your understanding that we will be given the national debt, deprived of all of our share of national infrastructure and be asked to muddle along as best we could, rebuilding what has been taken from us at our own expense?” That seemed to be the understanding.

So let’s reset this discusion. If we vote for independence, Scotland would need to rebuild an redesign a large amount of the architecture of the state. We’d need to rebuild a national state broadcaster, a tax system, a foriegn office, a military and much more. But we will be doing this with a mutual recognition that we are rebuilding things we own because they are being retained by the partner nation. So we would negotiate the means to do it, either through redesign of our share of assets (where they are in country) or through reductions in the debt we would inherit. Understanding this isn’t difficult once you dismiss all the silly stuff, once you pay attention to international norms of distributing assets and liabilities, once you stop seeing public finances through the farcical lense of ‘all expenditure is tax revenue’. We will have the tools and the resources to rebuild. It is time to stop asking ‘could we’ and start the debate on the terms of ‘what will we do?’.

First, let’s radically repair the UK systems as we rebuild. The chance to create a new tax system is one of the best opportunities we could be given; the need to reinvent our civil service might be a better opportunity still. Second, let’s think about where we want to locate our new systems. Certainly no in Edinburgh; perhaps we might put our foriegn office on the Fife coast and our tax collection system partly in run-down Ayrshire. Dumfries might get the citizenship and immigration policy jobs. And third, let us then think really creatively about what assets we really want. There might be a good case for taking the public share in RBS as a proportion of our assets, offering us a substantial starting-point for redesigning a banking system. We might think carefully about which overseas properties we might have an interest in and which not (there could be strong synergies in establishing a strong Scottish presence in the rapidly-growing Latin American nations).

It is time that we had a proper discussion about what sort of country we want to rebuild. To do that we need people to have a better understanding of the conditions in which we will be rebuilding. Those conditions will be much more favourable than you would believe from our newspapers. Scotland would do a good job of negotiating our independence, of that I’m in no doubt. It would leave us in a good position to start to rebuild the architecture of our society. What we do with that opportunity is up to us. So let’s start thinking about it properly.