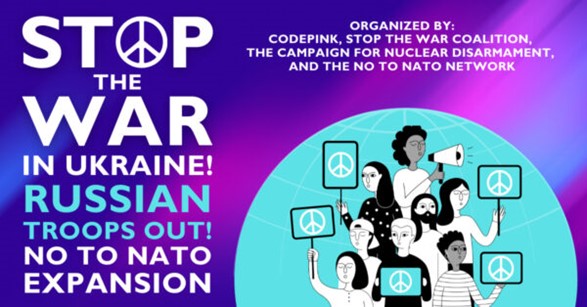 Kate Hudson lays out a blueprint for bringing about harmony and reconciliation.

A negotiated settlement is the only way to bring about an end to the Ukraine war. Neither the Russian nor NATO-backed Ukrainian forces can be simply defeated militarily because of the scale of the forces and weaponry available and the seeming willingness of both sides to escalate the conflict through both threats and heavy weaponry on the ground. But a negotiated settlement can only be achieved when both sides want the war to end, and although there is doubtless a desire for an end to the war from within Ukraine, both Russia and US/NATO have incompatible war aims that they are not currently willing to compromise on. Indeed, it is hard to see how the fundamental issues at stake – the meeting of the legitimate security interests of all sides – can be met within the ‘security’ structures as they currently exist in Europe and beyond.

The current conflict has been three decades in the making and has been long anticipated in this or similar form; those observing post-Cold War geo-political and military trends have been alert to the tensions and imbalances caused by NATO expansion. Despite the horror with which the political establishment currently responds to criticisms of NATO, it is absolutely impossible to understand how this war has happened without looking at what the US/NATO has done in the last three decades, during which it has been without question the dominant global superpower. What was to follow was apparent very early on. Despite the dramatic changes across Europe after 1989, with the demise of the Soviet Union and the dissolution of the Warsaw Pact, NATO – under US leadership – began the process of expansion into eastern Europe. Although promises had been made to the Soviet leadership that this would not happen, the US proceeded to fill the space vacated by its previous rival; hopes by many for a new world order of peace, with a concomitant peace dividend, were not forthcoming. The expansion continued to include former Soviet republics and NATO has gone on to become a global military force, abandoning its ‘defensive’ remit and engaging in war far beyond the North Atlantic. NATO expansion has caused significant regional tension and its continued expansionary plans are in large part responsible for this devastating war which risks engulfing much of Europe. Its refusal to take Russian security concerns into account and to rule out membership for Ukraine is now a block on a negotiated settlement. The role of the British government in respect of peace negotiations is shameful. British political leaders have denigrated diplomatic initiatives throughout and engaged in inflammatory rhetoric, even as the conflict intensifies. But, as is obvious, dialogue is essential to resolve these issues – war is not the answer, particularly when continued escalation threatens to bring nuclear weapons use.

Both NATO and Russia are nuclear-armed – totalling around 12,000 warheads between then, fairly equally balanced – and any war between the two would be catastrophic. While three NATO members – Britain, France and the United States – directly possess nuclear weapons, five European states – Belgium, Germany, Italy, the Netherlands and Turkey – host US/NATO nuclear bombs and are committed, under ‘nuclear sharing’ arrangements, to use these weapons of mass destruction upon command from NATO. As a nuclear-armed alliance, which threatens the use of nuclear weapons, NATO cannot create genuine security and should be dissolved. Europe needs a new type of security policy, based on cooperation, mutual respect and trust.

Rather than refusing to engage with the Russian leadership, the US administration must get to the negotiating table, to address all the fundamental issues in this conflict, including how to make the Minsk agreements work. It may be that a new form of agreement is necessary as the Minsk agreements were not enacted, but whatever it is called, the rights of minorities within Ukraine – as in all countries – have to be not only respected, but enshrined in law and constitution to ensure that language rights and regional autonomy are guaranteed. The question of the rights of minorities – or regional majorities – within multinational states or federations, is one of the great and urgent issues of our age and cannot be subject to resolution through the barrel of a gun, whether it’s in western or eastern Europe.

The war has already altered the political balance in Europe and is accelerating its militarisation. This will have a profoundly negative impact on our societies, engendering a culture of violence and national chauvinism. For years there had been talk of the increasing militarisation of the EU, encouraged by the US, basically to pour more resources into NATO. For years, however, there had been little progress. That has now changed. Germany for example, has undertaken a huge about-turn towards war and militarism. Massive increases in military spending are the pattern in almost all NATO states. So more and more of the people’s money will be squandered on weapons and war, instead of being invested in health, jobs and education.

It has often been said that NATO is the means by which the US makes Europe pay for its wars and its drive for global military hegemony. That is more so the case than ever, and it brings with it ever greater dangers of nuclear annihilation. CND – along with the rest of the international peace movement – has long argued instead for a new common security framework in Europe, not massively increasing militarisation. New structures of cooperation are needed to ensure that a war such as this cannot take place in future, and these structures must also enable effective ways of dealing collectively with the multiple crises that humanity faces today. Above all, these are the two existential threats of climate catastrophe and nuclear war, identified by the Bulletin of the Atomic Scientists when they set the hands of the Doomsday Clock at 100 seconds to midnight last year – the closest they have ever been, even at the height of the Cold War. Bu there is also the unfolding disaster of the coronavirus pandemic and its many variants, together with the likelihood of subsequent zoonotic diseases which are themselves often given access to human populations via bad agro-industrial practices that give no consideration to essential ecosystems. Other crises, in migration, food, water and other vital resources, often caused or exacerbated by war, need to be urgently addressed.

One of the foundations for the concept of common security within the peace movement – as well as more widely in civil society – is to be found in the work of the Palme Commission which marks its fortieth anniversary this year. The essence of Palme’s work can be summarised as ‘nations and populations can only feel safe when their counterparts feel safe’ and this is being carried forward this year, in the most timely fashion, by a new common security commission, led by the ITUC, International Peace Bureau and the Olof Palme International Centre with a team of experts from around the world. Key themes are asserted: that all nations have a right to security; that military force is not a legitimate means for dispute resolution; that reductions and limits on arms are necessary for mutual security; and that a nuclear war cannot be won and must never be fought.

Of course, it is one thing to list desirable outcomes and quite another to succeed in bringing them about – as long histories of treaties and international law have shown. The case of the nuclear Non-Proliferation Treaty (NPT) is one such case. For over forty years, the deal between nuclear and non-nuclear states – that those with nuclear weapons would disarm and those without them would not acquire them – has resulted in a situation where only one signatory has abandoned the treaty to secure a nuclear arsenal, yet all the nuclear weapons states at that time still have nuclear weapons and are currently in the process of modernising – and in some cases – increasing their nuclear arsenals.

Ensuring treaty compliance is exceptionally difficult – some would say nigh-on impossible – when it comes to the world’s most powerful states. Yet those of us who want to see a different world, free from the fear of war and nuclear annihilation, are not going to throw our hands up in despair and stop working to that goal. So, what are the concrete steps that the new common security commission recommend? What is striking to me is how much their proposals are to do with empowering and building upon existing initiatives, often from the global south, much as the Treaty on the Prohibition of Nuclear Weapons, ratified in 2021, was led primarily by the states of the global south in order to cut through the logjam of the NPT. Proposals include: encouraging regional bodies like the African Union, the Community of Latin American and Caribbean States (CELAC), the South Asian Association for Regional Cooperation (SAARC), the Gulf Cooperation Council, and the Association of Southeast Asian Nations (ASEAN), to develop frameworks that incorporate the principles of common security rather than creating new military alliances, with an emphasis on mediation and confidence building. One thing that has been learnt over the years as that there is no point in just beseeching powerful forces to do the right thing – alternative processes have to be developed and enacted. After all, no system or structure lasts forever, no matter how powerful.

There are many other elements to the new commission’s report, which rewards careful scrutiny, but one that will not be unexpected is the reference to the Helsinki Agreement, which in 1975 laid the foundations for the Organisation for Security and Cooperation in Europe (OSCE) and proposed that human rights and freedom of expression should be the foundation of peace. Almost fifty years on, the new commission calls for the renewal of the global and regional peace architecture, building on the OSCE model which comprises 57 countries from Europe, Central Asia and North America, including both the USA and Russia. No one can doubt that the Helsinki principles are at the heart of what is required to bring lasting peace, to Ukraine, the wider region and, indeed, to the world. The rapid degeneration of many supposedly democratic and economically advanced societies, with regard to increased poverty, inequality, attacks on civil and human rights, and in many cases the rise of the far right, is deeply disturbing. It needs to be fought on many levels, including understanding its inextricable link to the imposition of neo-liberal economic reforms onto our societies 30 years ago and their exacerbation after the 2008 financial crisis.

However we may choose to locate our own sites of political struggle, having a vision of new ways of conducting foreign and security policy has to be part of that process – and it has to be articulated in concrete ways that mainstream civil society and institutions can engage with. There is no silver bullet that can deliver a new world order of the type we can want to see. It can only be brought about by painstaking work and argument – and ceaselessly making the case for peace and human rights.

Despite the fog of war, it is vital that we work towards outcomes that enable a just and lasting peace for Ukraine – and for the wider world too. Only dialogue and negotiation, taking into account the wider context of this conflict – and the legitimate security interests of us all – can bring that about in a way that will enable a genuinely secure future for humanity. A new vision – and new inclusive, genuinely democratic and enabling structures – must be at its heart.

Kate Hudson is General Secretary of the Campaign for Nuclear Disarmament – see https://cnduk.org/

A left divided: Anti-war, anti-imperialism and the Russian invasion of Ukraine

Editorial: UK to Ukraine and back again – conflict and class