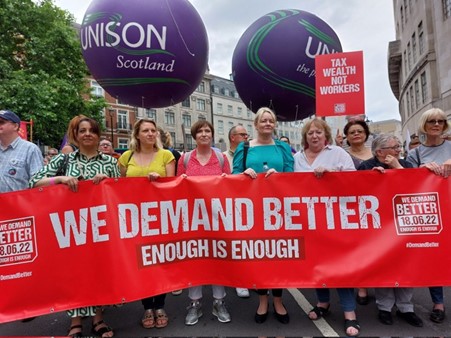 Having taken the fightback to London, Roz Foyer says we’ve also building it in our workplaces and communities.

We’re now experiencing a cost-of-living emergency and one that will only get worse. It is an emergency particularly for those on low pay and on benefits and is about how we provide ourselves with affordable (warm) housing, food, transport and childcare. It is caused by a financialised, market-led economy that for decades has been stacked in favour of the rich and powerful. There is no shortage of wealth in our nation. Rather, a fundamental issue with how unfairly it is distributed. As trade unionists and community campaigners, we have a key role to play in ensuring that it is distributed more fairly.

That’s why the STUC organised a cost-of-living summit alongside the Poverty Alliance on 17 June, where union activists and community activists came together to build a strong alliance and set of demands to address the issues our communities are facing. The key message to the summit was we cannot allow this wealth gap to keep on growing and accept government complicity in this. We need to be angry to get even.

The STUC put demands on the Scottish Government: i) Pay rises for all public sector workers that at least match inflation and make urgent progress on the creation of collective bargaining in key sectors; ii) Abandon the commitment not to raise tax on the better off for the next four years, and explore options for wealth and inheritance taxes, as well as increasing business rates for those making record profits; iii) Urgently reform the Council Tax and invest significantly in local government and support the policies listed in the STUC’s Council Election Manifesto; iv) Introduce an urgent rent freeze and bring rent controls forward well ahead of the current timetable; v) Introduce universal free school meals for all; vi) Properly fund a publicly owned National Care Service, delivered free at the point of need; vii) Fund local government to deliver an urgent greener homes retrofitting programme to increase energy efficiency; viii) Invest in publicly owned bus networks delivering low-cost sustainable travel; and ix) Invest in and grow our newly publicly owned railways delivering lower fares for more users.

But we also came to the summit to listen to and support the ideas and demands of others. We emerged from the summit with a shared vision of what needs to be done and how we can work together; what practical actions we can take and, most importantly of all, what we need to do to win. With our partner organisations, we will soon launch a shared cost-of-living charter and will be using this as an organising tool to mobilise and movement build around our demands.

This building can start with national organisations working together, but it will ultimately be delivered in our workplaces and communities because without building that strong grassroots collective we won’t be able to move government decision-makers in government or employers to give us the fair deal we deserve.

Meantime, across Scotland the industrial action has already started. We must do all we can to give support and solidarity to these workers taking action. It is vital that we support the rail workers to win, because when they win, we all win and the confidence of workers to fightback rises.

While we rightly demand more from Scottish Government, we also understand many of the main levers to tackle poverty and inequality lie at Westminster. The Chancellor’s so-called ‘rescue package’, for all that it was a small step in the right direction, was more spin than substance, doing the least they could get away with in the hope of saving the PM’s skin. We call on the Westminster Tories to: i) Increase public sector wages, at least to match inflation, and substantially increase the Minimum Wage to at least £12 hour; ii) Reverse the National Insurance increase; iii) Reduce the energy price cap as seen in France, where the government has enforced a price cap of 4% on the publicly owned EDF energy; iv) Implement a more substantial windfall energy company tax; and v) Immediately increase Universal Credit to reverse the real terms drop in income, reinstate the £20 uplift and remove the Benefits Cap.

That’s why the STUC joined with the TUC in its ‘We Demand Better’ 18 June London demonstration. I was proud to help compere this rally at the end. We sent a strong message that our movement is together, we are united and we are ready for a fight. Scottish contingents were out in force in London and the turnout was massive. You could feel the anger and the energy. I have no doubt the mobilisation with local meetings leading up to this demonstration played a key role in its success. In my view, we need to learn these lessons and adopt a similar ‘roots up’ based approach when mobilising across our own communities and workplaces towards national actions in Scotland, as we press our demands and build the pressure on the Scottish Government in the lead up to their budget.

Roz Foyer is the general secretary of the Scottish Trades Union Congress (STUC).