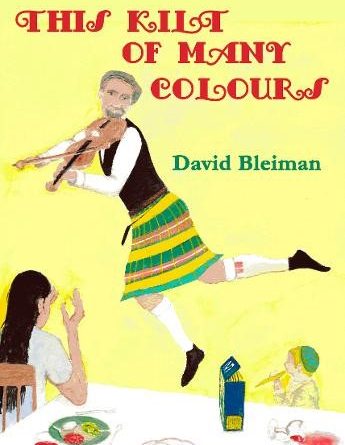 This Kilt of Many Colours is a poetry pamphlet which explores cultural identity, memory and the tensions between alienation and assimilation and how they shape individual and group identity. It is written from the perspective of a Scot of Jewish heritage, whose family has suffered the fate of many European Jews, were viewed as outsiders and treated with outright hostility in Christian Europe. Bleiman writes from personal and collective frames of reference in this superb collection, exploring culture and identity and how the past shapes us on a personal level, whilst not shying away from directly addressing the larger issues of Europe’s long history of anti-Semitism.

His poems subtly address historical injustices from the forced conversion and expulsion of Spanish Jewry, to Russian pogroms and the Holocaust. Bleiman’s verse blends his personal family journey with wider historical forces and examines what it means to have multiple cultural identities and experiences whilst retaining the essence of being both Jewish and Scottish.

The collection reminds us that the Holocaust was not an isolated historical apparition, which can only be laid at the feet of the Nazis, but was part of long European tradition of murderous anti-Semitism. In Lacquer Wood Fiddler, a poem about the experience of Russian Jews, Bleiman charts his own personal experience of visiting Russia, the home of his ancestors, whilst observing the country’s history of anti-Semitism. He employs the final lines of the poem to dramatic effect: ‘Ayy [excited yell], is the cry that falls from the burning barn when the Cossacks ride out in the morning.’ Again, the theme of the history of religious intolerance is returned to in El Impacto del Olvido which focuses on the Jewish persecution during the Spanish Inquisition. Ending the poem with the line: ’… before came 1492, before came 1943’ serves to remind the reader that anti-Semitism has a long blood-stained history across Europe.

Throughout his work, Bleiman uses the exit lines of his verse as device to bring his poems to a dramatic climax and to give his words a deeper profoundness. Whilst this technique could be deemed as clumsy and repetitive in less skilful hands, he employs it to great effect giving his work added solemnity. This can be seen in the end lines to Place Markers: ‘Five hundred years of sun won’t clear the dew from the gardens where the pomegranates grew’. Again, his use of imagery and wordplay goes beyond the decorative to have a compelling impact of the gravity of the Jewish persecution across the continent throughout the centuries.

As the title suggests, This Kilt of Many Colours, examines the themes of multiple cultural identities through the prism of heritage and explores not only the persecution of European Jewry, but also the rich Yiddish language which has contributed to Scottish culture. The Trebbler’s Tale is reminiscent of Hugh MacDiarmid, blending Scots and Yiddish to good effect and a reminder that Yiddish was still to be heard in Glasgow’s Gorbals as late as 1970s. Although, the poem on first reading is difficult because of its extensive use of Scots and Yiddish tongues, nevertheless, perseverance with it reveals a richness of language which blends the Ayrshire soil of Burns and the fertile earth of eastern European Yiddish culture. The poem was a worthy winner of last year’s Scots Language Society Sangschaw Prize.

This technique is again employed in Alphabet. Bleiman uses English and German to illuminate intersectionality between several cultures and the multiple identities experienced by those who live and navigate these worlds. He effectively blends both languages to lay bare the human condition of despair and hope being strange bed fellows: ‘I feel your pain of bloody words, your Wortschmerz [pain] spelling Weltschmerz [world weariness], your open wounds – open worlds’. This succinctly expresses how the despair of the past can recede and give hope for a liveable present. He further explores the themes of endurance and survival in Nasos Vayenas, 1978 ending with the lines: ‘I am writing now, forty years on, to help us, as you say, to endure everyday life’. The poet’s verse, although particular to the Jewish experience, also has a universality to it which resonates across cultural boundaries.

Bleiman’s more personal poems such as Dream Mash Lullaby, whilst touching, lack power of his verse when it deals with historical forces and how they shape identity. Bitter Fruit Ripening focuses the destruction of the Great Mosque of Cordoba and returns to the theme of Jewish expulsion from Catholic Spain after the fall of Moors ending with the lines: ‘Oranges here will ripen again and we shall make marmalade from bitter fruit’. Here, he makes use of the imagery of the quintessentially Spanish orange to potent effect. The fall of Granada ended 700 years of relative religious tolerance and directly led to the Inquisition which originally focused its attacks on Spanish Jewry. This religious persecution was fervently supported by joint monarchs, Isabella and Ferdinand V, who were known as the Catholic Monarchs. Again, when the writer returns to the theme of European anti-Semitism is where his verse has the power to move.

In the space available, I cannot hope to capture all that is extraordinary in this collection. This is an essential read for anyone who loves poetry and words and is interested in how history and culture impact and shape personal identity.