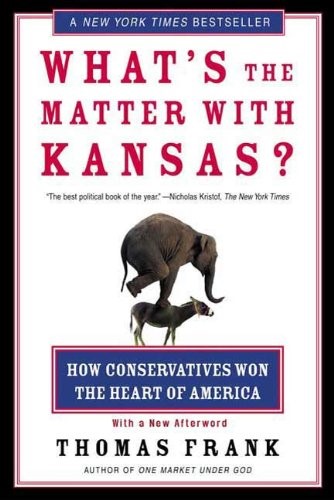 It’s never wise to forget your electoral base, or worse to treat it with contempt. But it’s all too easily done, and it comes at a high cost. That came to mind reading Thomas Franks’ 2004 book, What’s the matter with Kansas? How Conservatives won the heart of America. The author, on the American left, narrates radicalism’s sad decline in his home state.

Of course, America’s not just far away but a vastly different society and economy. But there’s still lessons for us here that we’d be wise to heed. For Kansas may now be red-neck Republican but it wasn’t always and that’s happened not just because of targeting by the ‘alt-right’ but tragically through policies and attitudes of the Democrat leadership. We forget our roots and ignore our base at our peril.

The book had been recommended to me by my friend, Henry McLeish. We share both an interest in and an affection for America. Not its government and its policies but its natural beauty and the diversity and dynamism of its people. It’s far from a universal view on the left but reading the book reminded me of my longstanding admiration for Eugene Debs, Woody Guthrie’s songs that I still enjoy, along with the great American labour authors, such as John Dos Passos, first introduced to me by an old Communist Party stalwart a lifetime ago.

For Kansas was a radical state from its inception. Established by northern abolitionists as a bulwark to the westward spread of slavery, it inspired the likes of John Brown and its struggles pre-dated the Civil War. Thereafter, it became a bedrock for the Farmer Labor cause not just in books and song but in politics. A county in Kansas was one of only four in America that voted for Debs in 1912’s Presidential election, and the other three were all Mid-West States.

But no more. Now it’s a lost cause for the Democrats and has lurched to the ‘alt-right’ with many of their new rabid redoubts, being former blue-collar democrat strongholds. As the book narrates there was no single reason why the Farmer Labor cause has been blown away by evangelical demands on gun control, abortion and same sex marriage. Some of it was certainly down to sophisticated manipulation by right-wing think tanks and propelled by a populist media. But not all.

Much was down to neglecting those radical roots, then followed by a denigration of them by the Democratic leadership. It came at a huge cost. Bill Clinton’s administration extended inequality and further reduced union power in an already poor state. Policy triangulation simply meant a lurch to the right and a low wage non-union economy expanded. Neglected by the leadership in Washington DC, local strongholds withered and fell.

Worse followed as those actions were compounded by an attitude that denigrated those people who were suffering. Rather than supported, they were mocked. Though a radical state, it was also a socially conservative one. As radicals were dispirited, evangelicals were inspired. As one cause failed, another offered salvation and the people moved further away from a party that they had once been the pillars for.

Of course, behind the demands of the moral crusade and social policies of the alt-right came their economic ones, of lower taxes and de-regulation. As Franks wrote it was ‘like a French Revolution in reverse – one in which the sans-culottes pour down the streets demanding more power for the aristocracy’. Bitingly commenting that those who proclaimed for Christ had rendered up to Caesar, conjuring up for me the words from Woody Guthrie’s ‘Jesus Christ’:
This song was written in New York City
Of rich men, preachers and slaves
Yes, if Jesus was to preach like he preached in Galillee
They would lay Jesus Christ in his grave.

Tragic and it’s a long way back for Kansas radicals. But there are lessons across the Atlantic and even in Scotland, as we see what’s happened south of the border. In many ways, the actions of Blair’s ‘new’ Labour mirrored those of Clinton: triangulation pursued to supposedly maintain the centre ground but, in reality, a pivot to the right. PFI/PPP, tough on crime though less so the causes of it and a general ignoring of the plight of those being left behind in ‘Cool Britannia’.

All of that was to see a demoralisation in the areas of deindustrialisation that had once been Labour heartlands. Allied to the policies was the perception of a metropolitan elite not just out of kilter but alien to many parts. They felt mocked and derided for their views. This dislocation from the roots manifested itself in Brexit. It was in many ways a cri de coeur from areas that were hurting – striking out, in Sunderland as in Kansas, and delivering up their own destruction, driven not by racism but rage, against leaders who had failed them. Tragically, it hasn’t ended there as the Red Wall’s collapse showed in 2019.

Suggestions that there’s a Hadrian’s Wall to protect north of the border are as fanciful as the Atlantic being an unbridgeable barrier. It can afflict any country or party. In 2014, the bedrock of the ‘Yes’ vote was the housing schemes. Triangulate your policies, ignore their pleas for Indy Ref2 or denigrate them as the Great Unwoke and you begin to alienate. Prejudice needs abhorred and gender and identity politics have a place. But class and the economy remain fundamental. Forgetting your roots is political folly.