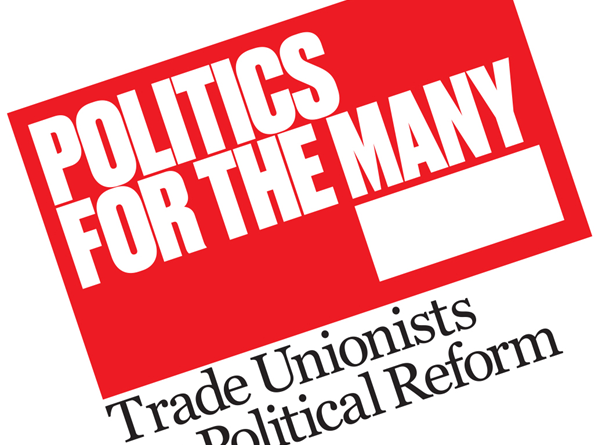 Twelve years of Tory rule has seen workers’ wages stagnate, their basic employment protections ripped up and they now face a crippling cost-of-living crisis that is plunging families into poverty. The need for a progressive government that stands up for working people has never been more pressing. Yet, the greatest barrier to achieving the changes people desperately need is now Westminster’s distorted voting system. First-past-the-post (FPTP) is a grossly unbalanced system that increasingly gives the Tories an artificial electoral advantage, gifting them and their corporate backers lengthy stints in office against the wishes of the majority. It is now becoming so slanted towards the right that Labour, the best vehicle for furthering the aims of the union movement, can only aim for sporadic periods in office. This reality is why replacing Westminster’s winner-takes-all system with a fair and proportional one must be an urgent priority for the union movement.

The last few elections have laid bare exactly how steep an uphill struggle the left now faces to win power under the current system. The 2019 election showed that Labour’s vote is becoming increasingly inefficient, piling up votes in dozens of safe seats it already holds. This means millions of working people’s votes are being wasted and ignored.

Current analysis shows that the FPTP system means the Tories now only need roughly a 3.5 point lead to secure a majority while Labour needs a massive 12.7 point lead to win. Put another way, even if Labour and the Conservatives win the same number of votes the Conservatives would end up with a 23-seat advantage. This system is only going to get worse. The boundary review is set to reduce the number of MPs in Labour areas while the Tories’ Elections Bill and discriminatory voter ID rules could disenfranchise as many as 2m voters without traditional forms of identification.

In short, the most successful election-winning strategy the Tories have is for unions and Labour to continue supporting FPTP. If they do, they will be choosing a future that abandons the country to many more years of needless Tory rule and regressive, anti-union policies.

Yet a better and fairer future is possible. The way to achieve it is for trade unionists and then Labour to back sweeping away FPTP and replacing it with a voting system that doesn’t suppress the voices of millions of people. This is something that is already supported by more than 80% of Labour members and a growing number of unions. At its last conference, UNITE withdrew its support for FPTP and other unions are now moving towards supporting proportional representation (PR).

The Scottish union movement is already challenging the outdated orthodoxy around FPTP, with STUC policy advocating that the burden of proof rests on those who want to keep the system rather than switch to PR. Meanwhile, the arguments for maintaining the status quo are increasingly threadbare. Bringing in PR would mean that the left’s vote would be accurately reflected at Westminster and that would mean more Labour and Labour-led Governments. For instance, under the single transferable vote (STV), which is already in use in Scotland, the 2019 election would have resulted in Labour and progressive parties getting 317 seats to the Tories’ 315 – rather than handing Boris Johnson an unassailable 80-seat majority with just 43% of the vote.

Scotland is already leading the rest of the UK when it comes to democratic reforms. Holyrood already has PR and its local elections are decided by STV, widely considered the gold standard of proportional electoral systems. Yet even though the SNP, the most widely supported party in Scotland, supports PR it is only Labour with the support of the unions that has any chance of changing the Westminster system.

PR is not a shot in the dark. Most democratic countries use a version of PR rather than the Britain and America’s antiquated winner-takes-all voting systems. For a vision of the brighter future unions should be fighting for what New Zealand offers as a striking example.

The country, which inherited a parliamentary system in the British mould, ditched FPTP for PR in 1996. Prior to PR the right-wing National Party held power for 74% of the preceding 47 years, but since the switch Labour has been in government 52% of the time, most lately under Jacinda Ardern. PR has directly led to more union-friendly governments in office in New Zealand that have made continued strides in improving conditions for workers. Among the measures New Zealand has introduced since PR are paid parental leave, equal employment opportunities, proper rest break and flexible working relations.

But any argument for PR on the left will be met with the familiar barrage of tired objections. Chief among these is that it supposedly lets in the far right and gives them a platform. This is not borne out by the facts. In most countries with PR, the far right has not managed to get a foothold in the national legislature. In the few where they have managed a small presence the mainstream parties have refused to work with them.

This line of argument also ignores that FPTP is often a Trojan Horse for the hard right. Only this month, we have seen the government announce plans to deport desperate refugees and asylum seekers to Rwanda in one of the most vicious anti-migrant policies in recent memory. With government policies like this can anyone credibly argue that FPTP is keeping the populist right out of power? Another charge is that PR is a ‘losers’ charter’; it is the left admitting it can no longer beat the Tories. This is a busted logic that traps the left into supporting the only electoral system that guarantees majority Tory rule – the very thing it is committed to preventing.

Now is the time for trade unionists to ditch this self-defeating mindset and break up the right-wing electoral racket.

Lynn Henderson is spokesperson for the ‘Politics for the Many’ campaign, a Senior National Officer for the PCS union and a former STUC president.

Community campaigns – the power to change from the bottom up