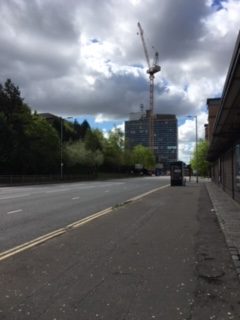 There are no silver linings to the coronavirus pandemic. Nature is not ‘healing itself’. We are mourning the loss of our loved ones, our communities, our ways of living. But riding underneath all this, we still must face up to the long-term existential threat of climate breakdown. COP 26 in Glasgow may be postponed, alongside Scotland’s new climate change plan, but this does not change the fact that time is still running out to decarbonise society.

Early on in the pandemic, Scotland’s First Minister told us: ‘Life should not feel normal right now. If your life still feels entirely normal, ask yourself if you’re doing the right things’. Environmentalists have long been making the same argument over our response to the climate emergency.

The challenge in recent years has not been developing solutions to the climate crisis – we know what needs to be done to decarbonise our homes, our transportation, our food systems. The struggle, instead, has been getting governments and wider society to understand the level of crisis we are in, and what an emergency response looks like.

Until now, the collective lack of political will has led governments around the world to adopt a ‘business-as-usual’ approach, with modest greening measures tacked on as an afterthought. It was this attitude that allowed the Scottish Government last year to propose a ‘Climate emergency’ Programme for Government filled with cognitive dissonance, including a freeze on active travel spending whilst continuing with multi-billion pound road building projects, and a modest reforestation programme paid for by global oil giant, Shell.

Warnings from the Intergovernmental Panel on Climate Change (IPCC) that we only have ten years left to make radical changes just were not sinking in. We were unable to imagine or accept the kinds of shifts to our lifestyles and our economies that we needed to make.

2020 must go down as the year that changed. Within days, we quickly learned what an emergency response looks like. We witnessed changes to our lives, our communities and our personal freedoms that none of us have ever experienced before. We can disagree about the details of some of these changes, whether they happened quick enough or according to the right plan. But overnight, things that Governments long told us were impossible suddenly became official policy.

Homeless people were provided accommodation, in apartments and hotels that had been the exclusive preserve of high-paying tourists. Flights around the world were grounded, whilst train companies were taken back into state ownership. The Chancellor himself acknowledged Universal Credit was not enough to live on, and immediately increased it.

The knock-on impact of bringing our economy to a shuddering halt has understandably seen an unprecedented drop in global emissions. Estimates for Europe have ranged between drops of 40% to 60%, whilst traffic volumes in Britain have been down, on average, by 70%. The cleaner air we are all now breathing is reportedly visible from space. Again, once unimaginable changes are now taking place in a matter of weeks.

To be clear, however, the seismic shift we have witnessed must not be seen as a blue-print for addressing the climate crisis. The rate of change and lack of preparation has meant the most vulnerable in society will bear the brunt for many years to come. Despite an unprecedented support package from the Westminster government, capitalist ideology has meant that we have still prioritised landlords over renters, and employers over workers.

The opportunity for addressing the climate crisis, however, lies in what happens next. With the Office of Budget Responsibility (OBR) predicting an economic slump worse than either world wars or the Great Depression, the world is going to need a fiscal rescue package unlike any seen before. Now is the time for a Scottish Green New Deal.

State investment in low-carbon infrastructure and manufacturing has the potential to create hundreds of thousands of jobs in Scotland alone. Fiscal support must boost our emerging sectors, which will provide secure, well paid jobs for the future – industries like wave-turbine technology, decarbonised heat networks, and large-scale reforestation programmes.

Any support packages for the airline industry and oil and gas sector must be conditional on a programme of managed decline. For these already under-taxed sectors, using public money to attempt to restore them to pre-outbreak levels would be both environmentally and morally incomprehensible.

The current restrictions on movement could permanently change how and why we travel. We must look to the patterns of increased walking and cycling in our now-quietened towns and cities, and make lower speed limits, wider pavements and increased pedestrianisation the new normal.
The temporary nationalising of our rail services was a recognition that public transport is a societal good, worth saving when it is not able to turn out a profit. We must hold onto and expand that concept, extending public ownership to bus services too.

Earlier this year, the Scottish Greens won a commitment to roll out free bus travel to all under 19s – a fully nationalised public transport system will allow us to explore that further, with the goal of delivering free public transport for all.

And, lastly, the pandemic has show us how precious yet fragile our globalised food system is. Green New Deal funding to shorten and re-localise food chains would have the double impact of increasing food security, whilst cutting associated emissions.

Our generation now knows what an existential crisis looks like. There is no ‘business-as-usual’ to hide behind any more, but there is also no limit on imagining the possible.

Mags Hall is a political researcher, co-convener of the Scottish Green Party’s National Council, and a lead candidate for Mid Scotland and Fife in the 2021 Scottish Parliament elections.

Calling for a democratic, decentralised revolution