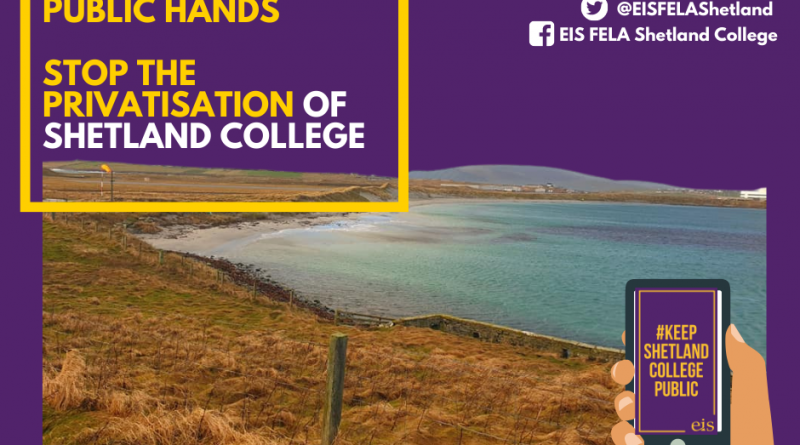 Shetland College was privatised on 1 August 2021. This was the first time in Scottish history a Further Education (FE) college has been transferred from public ownership and control into a private company limited by guarantee. Despite the Scottish Government’s recent assurances that they are committed to FE remaining in the public sector, their non-departmental government body, the Scottish Funding Council, endorsed Shetland College’s privatisation and remains ideologically committed to this ‘governance’ model.

Shetland College was part of Shetland Islands Council, as many colleges in Scotland were until a few years ago before they merged to form new public sector FE colleges, until it was privatised in August 2021. It had been merged with Train Shetland (also part of the Council) and the NAFC (North Atlantic Fisheries College) Marine Centre, a vocational college governed by a Board of Trustees.

The lecturing staff at Shetland College were not opposed to the merger, which will hopefully create opportunities for learning and education both within and outwith Shetland, although the two colleges are very different in how they have developed and in the way they operate, with one having a more diverse curriculum and the other concentrating on marine, fishing and aquaculture-based training and qualifications. However, the idea that this newly created college should be registered as a private limited company, instead of as a public body is unfathomable to me, colleagues, and many in our community.

Privatisation means the new college is not subject to the same level of Scottish Government oversight as the vast majority of other colleges throughout Scotland are and it won’t be accountable in law to the democratically elected Scottish Parliament. Board members will only be liable up to the financial ceiling set when the company is formed (as little as £1 per member) meaning they can all walk away if their company – our college – is not financially viable. Although it will be run not-for-profit, the private limited company can build up unlimited financial reserves, unlike incorporated public colleges, meaning money does not have to be re-invested into teaching and learning. Instead, it can be hoarded. This is despite the majority of funding continuing to come via the Scottish Funding Council (SFC) i.e., tax-payers’ money. The new college will not be subject to full reporting by Audit Scotland on its financial stability, and the Board of Management cannot be withdrawn by Scottish Ministers if necessary. So, privatisation is an affront to democracy itself.

Whilst union life in Shetland is, perhaps, a bit different from that in the Central Belt – political activism is less obvious and ‘in your face’, campaigns are less frequent, with folk often less likely ‘to put their head above the parapet’ – the level and extent of opposition to privatising Shetland College from members and the public is very telling. It is clear, there is a manifest depth of commitment to ensuring further education remains public in Shetland.

It was the Scottish Government’s non-departmental body (the SFC which funds FE and HE in Scotland) which originally recommended to Shetland UHI’s Shadow Board, set up to progress the merger, that privatisation of the new college would allow for more ‘flexibility’ in managing finances. It was also the same SFC which advised all stakeholders, including Shetland Islands Council, of the process for merger including that a 12-week consultation period would be carried out by the Scottish Government prior to the new college’s ‘vesting day’, i.e., the day it became a new entity. This would mean the Government had some oversight of the process including the business case, which recommended privatisation.

Contrary to this previous advice from the SFC, which Shetland Islands Council relied upon, a consultation period prior to the merger and vesting of the college, i.e., prior to privatisation, did not take place. The SFC had apparently ‘assumed’ Ministerial approval would be required but somewhere along the line it changed its mind. The College passed from public ownership and control into private hands, despite remaining publicly funded, without any scrutiny over the governance arrangements.

It was Shetland Islands Council which took the decision to merge and to proceed with the option of ‘outsourcing’ the college to a private limited company, but on the basis of a decision-making process which relied on advice from the Scottish Government’s non-departmental body, the SFC, which is accountable to Scottish Ministers and, ultimately, to the Scottish Parliament and tax payers.

The SFC is governed by a Board of Management containing people with a wide variety of business interests – family businesses through to consultancies – and professional Public Board members from the Law Society of Scotland, the Police Authority Board, other educational institutes and organisations, and looser networks. A veritable who’s who of public appointments in Scotland. The Chief Executive was formally Alex Salmond’s Principal Private Secretary and worked with the Scottish Government in a variety of roles until 2019. And it seems not one of them actually made the case against using public money to privatise a college.

Whilst the union was accused of being ‘ideologically opposed’ to privatisation, which it is, the same can be said for those in charge of our tax payers’ money – they are ideologically supportive of accumulating surpluses in an opaque manner, away from public scrutiny and accountability. The Scottish Government, for all its rhetoric of inclusive growth, fair work, collective bargaining, and lowering the attainment gap, seemed content to stand back, claiming this was an ‘operational matter’ for Shetland Islands Council and the new Shetland College Board, and that they have no locus in the governance of FE colleges, despite the SFC’s misleadings being pointed out.

The SFC published a ‘Review of Coherent Provision and Sustainability’ in June 2021. The recommendations in the main report include that the Scottish Government should review the classification of all colleges in line with English classification by re-classifying them all as private sector bodies in order to remove Scottish Ministers’ powers ‘of direction and consent, their role in the governance of individual colleges, and college requirements relating to the Scottish Public Finance Manual and national bargaining’. The Scottish Government has now provided assurances that FE will remain classified as public sector, but this does not help Shetland.

We believe there needs to be a look beyond current economic trends to provide long-term quality education for students in Shetland and across Scotland. Education is a public good and should be a public service, with the emphasis on the educational provision for all, regardless of personal circumstances and income, rather than seeking to generate income or, in other words, ‘surpluses’. It is worth noting here that Shetland Islands Council and Shetland UHI, relied very heavily upon the arguments relating to generating surpluses to persuade councillors and board members to approve privatisation. Their very own financial forecasts predicted no ‘surpluses’ over the next 5 years – this strongly suggests the arguments relating to being privatised, as you can retain ‘surpluses’ to be a massive ‘red herring’.

It is evidently clear from staff in privatised colleges that being employed by a company limited by guarantee reduces your security of employment and, historically, these colleges have had poorer terms and conditions. This resulted in very committed staff choosing to leave these colleges. These concerns over terms and conditions and security of employment would clearly have an impact on staff morale and the stability and breadth of provision for students. One of the manifest concerns is that operating as a ‘private’ company will mean the primary objective will be to ‘balance the books’ to the detriment of providing inclusive and accessible learning.

This will simply mean there is an ever-increasing concentration upon the courses where there are naturally higher student numbers and that a ‘stack ‘em high’ approach to education will prevail rather than a concentration on the quality of education. There is a concern that being governed by a company limited by guarantee and the desire to generate surpluses would mean economics, rather than educational benefit, is driving provision. This would result in a less diverse range of courses being offered for the residents of Shetland.

The right to education is a key human right and privatisation is a clear threat to human rights, as Philip Alston, the UN Special Rapporteur on extreme poverty and human rights, wrote in September 2018 when he highlighted the inequality in the UK caused, in part, by being wedded to a neo-liberal agenda of which privatisation of public services is intrinsic. There is a plethora of information on why ‘public is better’ not least of all that collected by the We Own It campaigning group (https://weownit.org.uk/people-not-profit). From energy to transport, we know that privatisation simply increases costs on the consumer. Instead of being a shareholder, keeping costs low, there is a never-ending drive for competition which puts profit before people. We see it now with our NHS. Where once it was straightforward to get tests and treatment, we now see a slow creep of other companies shoring up the gaps, creating false choice.

For us, it is about democracy, transparency and accountability. We do not want to work, to educate, being dictated by the whims and business interests of others. There is something much more fundamental to teaching and learning, namely, inclusive and accessible teaching and learning for the sake of education as a principle.

Though the College opened as a private limited company on 1 August that does not mean we have given up. Transport workers and their unions have fought tooth and nail to have our railways and buses re-nationalised – not just for themselves and their terms and conditions but for the public service. That fight is beginning to pay off. Unions are stymied by anti-union legislation in terms of taking industrial action over privatisation. However, staff are very concerned about any future changes to terms and conditions. In that case, we would need to consider all options including industrial action. We were supported in our campaign by Scottish Labour and the Scottish Greens. We can only hope this support continues. We will continue to argue for Shetland College to returned to the public sector as a public service. We will keep a close eye on the upcoming mergers of Lews Castle, North Highland College and West Highland College to ensure there is no further privatisation in Scottish FE. Privatisation must become a dirty word again in our public services – with the negative impact on students and staff of privatisation continually highlighted.

A history of my union’s campaign against privatisation can be found here: https://www.eis.org.uk/Content/images/FELA/Shetland%20Timeline%20updated.pdf

Andrew Anderson has been a committed trade unionist all his working life and became EIS-FELA branch secretary for Shetland College in January 2014. He has been a lecturer for 16 years, mainly within Community Learning which provides accessible and inclusive learning for a wide variety of students.