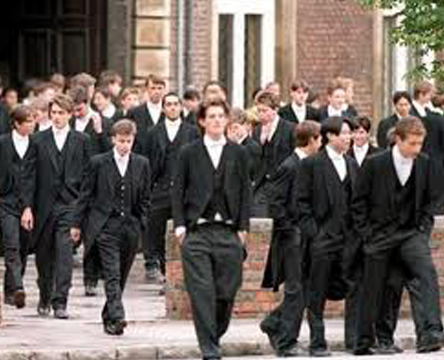 In an article in the Daily Telegraph last May, Michael Gove, Tory Education Secretary and academies enthusiast, commented on the preeminent role played by private school graduates in British society. Expressing his belief that “it is remarkable how many positions of wealth, influence, celebrity and power in our society are held by individuals who were privately educated”, Gove offers a series of examples illustrating how private school alumni dominate the upper echelons of politics, medicine, academia, law, business, and the media. The article contains a number of other compelling and, coming from a Tory Education Secretary, surprisingly progressive observations about the profound inequality at the heart of British society:

“More than almost any developed nation, ours is a country in which your parentage dictates your progress.”

Aware that these comments could easily be interpreted as a criticism of private schooling, Mr Gove was quick to assure us that this was not the case. As a consequence, he did what numerous politicians of all stripes have done when commenting on societal inequalities, especially those stemming from our two-tiered education system: diagnosed the malady but did not prescribe a cure.

For any political party brave enough to take concrete action, a commitment to rescinding the charitable status of private schools, or, at the very least, ensuring that they justify it, would constitute a powerful statement of intent

For all that, Mr Gove’s comments merit further interrogation. A recent study of international social mobility by the Sutton Trust found that a child’s life prospects rise exponentially according to the social economic status (SES) of their parents, with children from educated, wealthy families hugely outperforming those from low income families. Naturally, high SES families have an interest in maintaining the status quo. It is unsurprising, therefore, that in countries with a greater reliance on the private education sector (the UK and US) social mobility is increasingly sclerotic.

These points were driven home by a recent social report by Alan Milburn, the Government’s Social Mobility Tsar. Milburn found that the most advantaged 20 per cent are seven times more likely to attend university than the least advantaged 40 per cent, and that four private schools and one sixth-form College sent more pupils to Oxbridge than the rest of England’s 2,000 state schools combined.

Despite such incontrovertible evidence of the damage that the private education system does to our chances of achieving greater societal inequality, the idea of abolishing private schools would be viewed, in contemporary society, as extreme bordering upon the heretical. In today’s capitalist consumer culture, any attack on the sacred cow of parental choice would not be tolerated. In any event, EU human rights legislation would likely render such a move illegal. As consequence, the debate on private schools has necessarily focused on the issue of charitable status.

It is safe to say that private schools do not subscribe to most people’s definition of a charity. They are probably best described as fee paying not-for-profit educational establishments. Their enjoyment of charitable status can be attributed to the fact that many were originally conceived as charities – Eton was established by Henry VI as a school for needy scholars. Over the years, however, they have transmuted into bastions of educational elitism and social privilege.

The journalist Fiona Millar, a longstanding champion of the state sector, has advocated the introduction of more stringent regulations to gauge whether independent schools are justifying their charitable status. Her latest intervention centred upon an attempt in 2011 by the Independent Schools Council to overturn one of the primary provisions of the 2006 Charities Act, which removed the presumption that all institutions providing education also provide public benefit. Not only did the attempt fail, it prompted a renewed attack on the private education sector by the Blairite Labour MP and shadow education secretary Stephen Twigg. In an interview with the Guardian, Twigg claimed that a Labour Government could legislate to remove charitable status from independent schools deemed to be failing to meet the public benefit test, and attacked private schools as “a major barrier to achieving a more just society and greater social mobility”.

The issue has also been garnering headlines north of the border, in large part due to a series of articles by the Sunday Herald’s investigative journalist, Paul Hutcheon. These have served to refocus attention on a debate which has lain largely dormant since 2003, when the Charities and Trustees Investment (Scotland) Act 2005 was making its passage through Parliament. A group of Labour, Scottish Socialist Party and Scottish National Party MSPs saw the legislation, which established OSCR, as an opportunity to reappraise and potentially rescind the tax breaks afforded to the independent education sector. Nicola Sturgeon, then the SNP’s Justice Spokesperson, defended the right of parents to choose to educate their children privately, whilst expressing her belief that “the role of the taxpayer should be to fund high quality state education and not to subsidise the private decisions taken by individual parents”.

Sturgeon shifted responsibility for taking any action onto Westminster, which at the time retained legislative competence on the issue, claiming that she did not want the passage of the Act “derailed” by a discussion over private schools. This stance was backed emphatically by the then First Minister Jack McConnell, whose official spokesman moved with depressing if predictable celerity to assure the private sector that “any attempt by backbench MSPs to use this Bill as the basis for some kind of class action will be resisted”.

Since the SNP’s ascension to power in 2007 the issue has hardly been raised, and neither Nicola Sturgeon nor any of her party colleagues shown any interest in revisiting it. However, Hutcheon’s interventions have succeeded in returning it to the national agenda. His investigations have uncovered a number of interesting facts; for example, a series of questions to the Ministry of Defence established that, over the past 10 years, Scottish Private Schools have received over £10 million of taxpayers’ money to pay for the education of the children of senior army personnel earning in access of £100,000, under the Continuity of Education Allowance.

But Hutcheon’s primary focus has been the tax breaks that Scotland’s private schools derive from charitable status, chief amongst which is a mandatory 80 per cent discount on non-domestic rates. In practice, this means that whilst Wester Hailes Education Centre, where 40.5 per cent of pupils are registered for free school meals, received in 2011/12 a non-domestic rates bill of £261,873, Fettes College, where the average fee for a day pupil is £21,075 per annum, received a bill of just £41,828. Essentially, private sector schools are being subsidised by state sector taxes.

Key to the argument over charitable status is the public benefit clause enshrined within The Charities and Trustees Investment (Scotland) Act 2005. This states that;“In determining whether a body provides… public benefit, regard must be had to [circumstances] where benefit is, or is likely to be, provided to a section of the public only, whether any condition on obtaining that benefit (including any charge or fee) is unduly restrictive.” Whilst there is no doubt that private school fees are “unduly restrictive”, the clause allows for the taking of “mitigating action” to offset this. For private schools, this primarily involves the award of bursaries.

However, evidence shows that most bursaries awarded by Scottish private schools are only partial. An analysis of mid-ranking Merchiston School reveals that in 2011/12, means-tested bursaries accounted for just 8.2 per cent of gross income (14.7 per cent of the school roll). Only 11 pupils (2.4 per cent of roll) received 100 per cent bursaries. Consequently, the vast majority of bursary recipients are likely to come from affluent families that can afford an annual outlay of several thousand pounds in school fees.

The recent revelation that Fettes College in Edinburgh has failed the charitable status test prompted Scottish Labour’s Education spokesperson, Hugh Henry, to declare that private schools failing to meet the “public benefit test” should have the status rescinded. The likelihood of this is scarce; judging by past examples, Fettes – along with the other two schools deemed to have failed the test – will be required to do little more than marginally increase its bursaries and mark a few more state school exam scripts.

However, the purpose of a charity is not to marginally narrow the gap between the well off and the very well off, it is to help the neediest; in an educational context, this entails addressing societal inequality and working to ensure equality of opportunity. Defenders of private schools argue that by paying both taxes and fees parents who send their children to private schools are in fact subsidising the state system. But these parents are not actuated by philanthropic motives; they wish to afford their children an advantage in life which most parents cannot afford. Society would be much better off if everyone paid higher taxes and sent their children to the local state school.

Some academics have suggested that private schools could do more to justify their charitable status if they agreed to work more closely with state schools to drive up educational standards. Private schools, unlike their pressurised counterparts in the state sector, have the time and resources to experiment with new and innovative modes of teaching and learning. According to one academic, sharing the benefits of this knowledge should be a condition of their charitable status. In this way, they could justly be said to be driving improvement and innovation across the educational establishment.

The problem with this is that independence from the state sector and a reputation for innovation is what makes the private sector, in the eyes of many parents, so alluring. The knowledge that this independence was being diluted would inevitably detract from that allure. Narrowing the gap is not in private schools’ financial interests. Allied to this is the fastidious distaste – for the most part carefully concealed – that many private educators have for bringing their pupils into contact with their counterparts in the state sector. They will go to great lengths to maintain the purity of their elitism, as Anthony Seldon, Master of Wellington College, has discovered.

Seldon has made concerted efforts to foster closer links between the private and state sectors. The results have not been encouraging, with Seldon’s experiences leading him to conclude that most private schools have no wish to engage with state schools in this way, offering “spurious reasons such as parental objections for masterly inactivity”. Reciprocity is germane to the charitable covenant: why should taxpayers continue to subsidise tax breaks for schools that refuse to reinvest in society?

Even following Ed Miliband’s recent paean to state school values – and implicit rejection of private school ones – it remains unlikely that any political party north or south of the border would have the courage to launch a serious assault on the existence of the independent sector. For many, the principle of parental autonomy is king.

However, for any political party brave enough to take concrete action, a commitment to rescinding the charitable status of private schools, or, at the very least, ensuring that they justify it, would constitute a powerful statement of intent, signalling a genuine determination to reform and improve the education system, rather than sit idle as inequality increases and inherited privilege becomes ever more entrenched.